The Parks and Recreation star is used to unsolicited steak and bacon arriving to his table at restaurants. 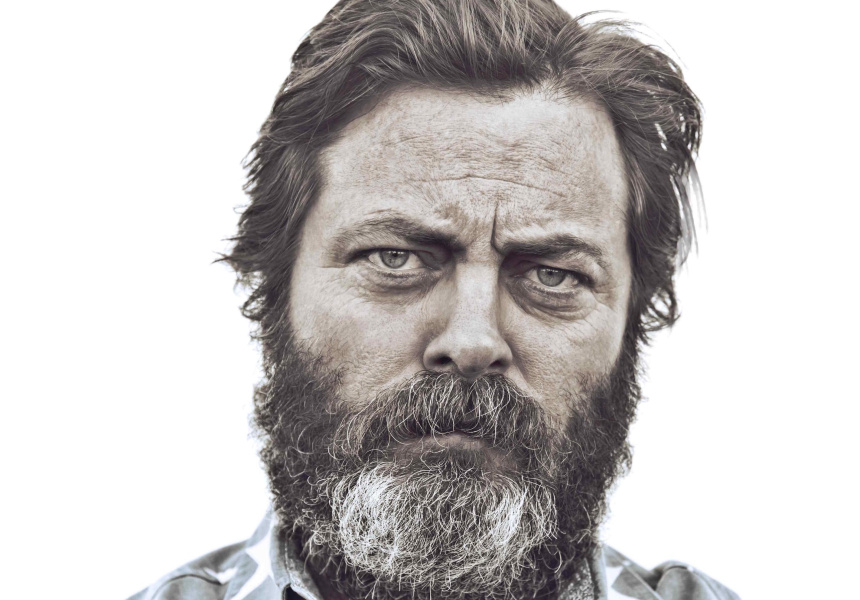 Midway through my interview with Nick Offerman, he jerks away from the phone to let out a vigorous sneeze.

Clearing his throat, he says, “Excuse me, it’s the cedar dust.”

When I call the Parks and Recreation actor, humourist and carpenter, he’s leaving his furniture wood shop in LA to get ready for a performance of Summer of 69: No Apostrophe, a comedy show he performs with his wife, Megan Mullally.

It’s the same show he and Mullally were scheduled to tour in Australia at the end of this month – until Mullally pulled out at the last-minute due to a film commitment.

What we’re left with is Full Bush – Offerman’s first solo show since American Ham (which you may have spotted on Netflix).

“I’m sort of an old-fashioned country boy living in a modern age, and Full Bush is about my philosophy and lifestyle in the age of information and Angry Birds,” he explains.

There’s a brief silence from me.

He continues, “Because I’m a Luddite, I’m sure Angry Birds is now an ancient reference, but I don’t know what the cool new game is people play on their phones.”

Offerman is careful to avoid calling himself a comedian or a stand-up – he prefers the more loose-fitting “humourist”.

“My friends are some of the funniest comedians in the world,” he says. “I am not a joke writer. It’s my way of thinking that a humourist is someone who takes a more anecdotal approach and colours his or her narrative with the flavours of the jackass.”

He explains that while Full Bush is still a funny show, “by calling myself a humourist it allows me to speak a little sincerely at times as well”.

One of those sincere soapbox topics is social media as a distraction from life – a proposition more entertaining coming from Offerman than from your parents.

“I encourage people to do things with their hands. I think you can occupy your time with social media or all the other fun diversions to be found on our phones, but there’s literally nothing to be gained from that,” he says. “Whereas if you engage in some sort of discipline – like cooking, or making music, or knitting or woodworking – at the end of your diversion you’ve created something practical. You have a meal, or a song, or a table.”

He speaks in the same unmistakeable Ron Swanson baritone he became famous for on Parks and Recreation – steeped in single-malt whisky and furniture polish, or so one might imagine. His tone is deadpan and wooden, until he breaks into the occasional girlish giggle that seems to be from another human.

Looking over his career and media appearances – and simply, the way he talks – it’s hard to know where Ron Swanson ends and the real Nick Offerman starts.

Take this ad he did for Scottish distillery Lagavulin before Christmas last year, entitled “Yule Log”. He sits before a crackling fireplace in a dark leather chair, wordlessly drinking whisky for 45 minutes. It’s exactly what Swanson would do, if he had the episode time.

Both Offerman and his wife separately shot to fame in their late thirties as a breakout supporting character – Mullally as the scene-stealing, high-pitched, alcoholic socialite, Karen Walker, on Will & Grace.

“My wife went through this with Will & Grace. In both of our cases, people would say, you’ve got to do a spin-off with Karen or a spin-off with Ron Swanson,” Offerman says.

“But the mistake in that is both of those characters are amazing sauces on your entrée. If you go back and look at what the audience loves about them, they’re all very brief little moments.”

Although there’s no spin-off, is Offerman making a career off the success of the whisky-and-breakfast-food-loving Swanson? Or is he the real deal?

“There are wonderful pros to being conflated with the character Ron Swanson, but also a few cons,” Offerman says. He mentions an amazing career of restaurant visits, “to which I’m always sent an extra steak or pound of bacon, unsolicited.

“Any good comedy character takes parts of real life and writes them in a much larger, cartoony sense, and so the things I have in common with Ron Swanson – which are love of woodworking, and scotch, and meat, and brunettes that look like my wife – those are very much a part of my own life. But I’m a human being, so [the reality is] much more complicated and much less funny.”