Walkthrough: Acmi Raises the Curtain After a Two-Year, $40 Million Renovation

Discover a “mermaid skeleton”, costumes from The Favourite and a cabinet-full of Pez dispensers; be the star of your own flip book; play an arcade game featured in Stranger Things; and much more. Plus, a coaster-like new piece of technology that’ll completely change the way you interact with each exhibit. Within minutes of our guided walkthrough starting, the urge to break off from the group is real – and overwhelming. I want to gawk at every single little thing. There’s a cabinet filled with cameras and Pez dispensers and a “mermaid skeleton” (a reference to the TV show H20: Just Add Water). There’s a cosy couch nook with a Countdown sign lit up above it. And there are spinning wheels where – if you get up close and look through with one eye – you can see still images morph, almost magically, into film.

Three of us are here, in Fed Square, for a sneak peek of the new Australian Centre for the Moving Image (Acmi), which has just undergone a two-year, $40-million update – and is back in full force as of today. And I can tell I’m not the only one who’s completely entranced by the screen-culture hub.

We almost need to be pried away from the zoetrope, a spinning cake-like structure that uses strobe lighting to make it appear as if cartoon figures are dancing as they go round and round. We’re then shown behind a curtain where we’re instructed to throw our limbs and bodies around – and our moves are captured in flip-book form.

As we move through, we discover costumes from critically acclaimed films such as The Favourite and True History of the Kelly Gang, and playable arcade games, including Dragon’s Lair from Stranger Things. In another room, a film exploring how our relationship with the camera has changed over the past few decades plays on loop. It starts with self-conscious, self-deprecating clips from the ’70s and progresses to make-up tutorials and emotional outpourings on Tiktok.

Also part of the launch is the film season Love & Neon: The Cinema of Wong Kar-wai, a retrospective of 11 films celebrating the Hong Kong auteur’s cinematic prowess.

Everywhere you look there’s something to interact with. And while it’s undeniably fun, none of it is gratuitous or purely gimmicky. Acmi is a museum after all – and the 900-plus objects in its new, 1600-square-metre permanent exhibition, The Story of the Moving Image, all work to create to a bigger picture. It’s like disguising vegetables in dessert – you don’t realise how much goodness has been jammed in until you find yourself dropping cinema facts into conversations for a week.

Acmi has waited a long time for this moment – it’s been more than five years in the making. The team had already closed the doors before the pandemic hit, and had been quietly chipping away behind the scenes to create something that – as it turns out – is innovative, quite remarkable, but still true to the celebration of film that has always been Acmi’s M.O.

Honestly, I wasn’t sure what to expect from such a mammoth, multi-million-dollar overhaul. I wondered if the rocket clock from Play School would still be part of the permanent collection, and if a clunky lanyard radio would be telling me all about what’s on display.

Neither were to be found. Instead, Acmi’s been through a complete digital transformation. New, museum-wide technology completely changes the way you interact with each exhibit. When you arrive you pick up a Lens, a device that looks like a coaster. Each one contains a chip and unique ID number, and whenever you see something that interests you, just hold it up to a plaque and “collect” it.

There are a few reasons to do this. As you exit, there’s a room that shows what’s being collected in real time, and screens you can tap to discover the connections between all the things you’ve “collected”. Then, long after you’ve left, you can go online to find more information about the films, costumes or displays that grabbed you (which is exponentially better than the blurry iPhone photos of information cards that I usually end up squinting at). Oh, and if you make your own flip book, you can collect that too – there’s an option to print it out in the store as you leave.

There’s a bright, natural-light-filled lobby at the Flinders Street entrance, and where the old gift shop was you’ll now find a lounge backed by curio-filled cabinets. (If you take a closer look through the glass, you’ll see it leads through to the digital-preservation labs, putting the background work that Acmi does on display.) With the reopening also comes a series of revamped educational labs and a new restaurant called Hero by celebrity chef Karen Martini.

In a museum as comprehensive as Acmi, it’s difficult not to just list everything. I haven’t even gotten to the room filled with tubes that project home movies between them – if you stretch out your arm you can literally hold memories in the palm of your hand.

All of this is to say: one visit is definitely not enough. My Lens and I will be back.

Entry to Acmi and The Story of the Moving Image is free, though you need to book a time slot online. 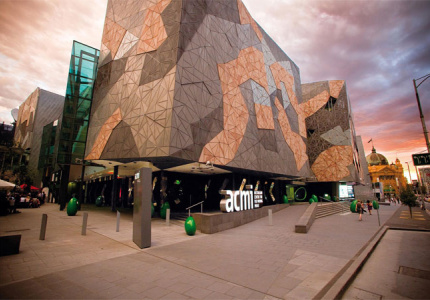