Ukiyo Is an Immersive, Miyazaki-Esque Escape Room, Hidden in Brunswick

One game, about the peculiar masked Crumbling Prince, is unravelling chapter by chapter – it’ll take years to play the whole thing. 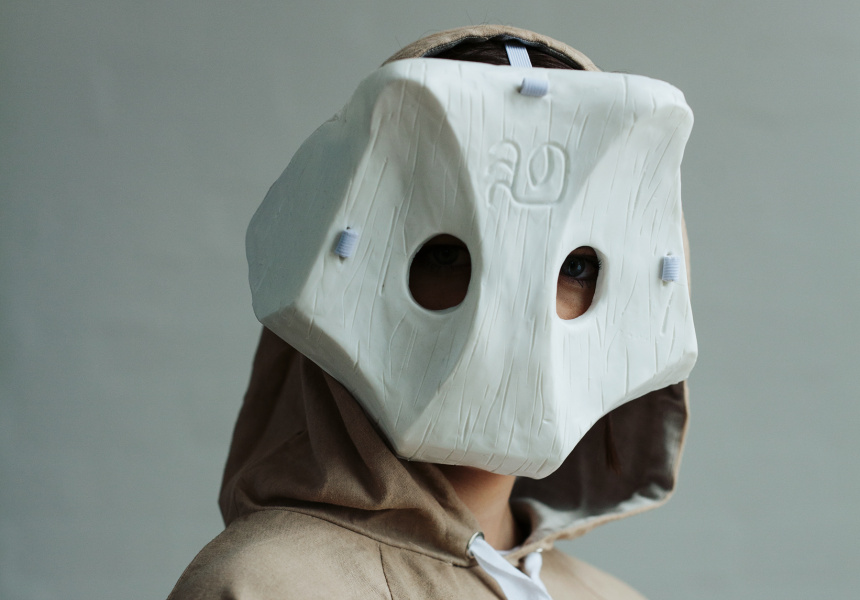 It’s dusk outside, but in a garden hidden inside a dilapidated Brunswick shopfront, it’s midday. A glowing orb pulses inside a hollow cherry blossom tree. I’m wearing a beige poncho and a white wooden mask, and along with the three friends I’ve roped into this experience (bless them), I’ve been tasked with solving the mystery of the Crumbling Prince, a peculiar talking scarecrow obsessed with puzzle games. Atmospheric music plays overhead.

Ukiyo is a kind of escape room with role-playing games, borrowing elements from the films of Hayao Miyazaki (Spirited Away, My Neighbour Totoro) and the Legend of Zelda video games.

“I’ve tried to talk to the prince but he’s extremely defensive,” says our guide at the beginning of the game, a man in his early twenties clearly relishing the fantasy role-play. “You must befriend him.” Trams rumble past outside.

My friends and I come to relish it too. We each wear masks that endow us with different abilities, and when the lighting goes down and things get a bit scary, there’s real urgency in our voices as we work together, problem-solving.

“It’s an environment to be whoever you want, to immerse yourself,” says Michael Armstrong, the game’s designer.

The concept stems from Armstrong’s childhood passions. He grew up loving Zelda on Nintendo 64 (though given he’s 23 now, it would have already been very retro), but his screen-averse parents were wary of letting him play too much. So he spent hours reading the manual, immersing himself in the world and the mechanics of gameplay.

“The world became so much bigger in my head,” he says. “Growing up, I made every kind of game.”

Ukiyo’s mechanics are ingenious, with puzzle upon puzzle and plenty of pre-recorded voice acting and music. Some of the gameplay and storytelling could be more specific – at times it frustrated our non-gamer brains – but this is just the beginning of a huge project (the hour-and-a-half I spent playing The Crumbling Prince is chapter one of a projected 10), so it might all make more sense as future versions are released. Chapter two is now available as well. It’ll take years to tell the whole story.

The Crumbling Prince isn’t Armstrong’s first immersive project. In the next room is its predecessor Deep Space, which is set aboard a malfunctioning spaceship. It looks like something from Doctor Who, only made on a shoestring budget, with found objects and crafty lighting making a pretty convincing – if grimy – space shuttle. The interactive follow-up Deep Space: Divinity just launched, too.

But it’s the Miyazaki aesthetic that’s more Armstrong’s vibe. He’s aiming to recapture the feeling of those hours spent immersed in the world of Zelda as a kid.

And yet, despite playing for most of his life, he’s never finished the Zelda games. “I don’t want them to end,” he says.

This article first appeared on Broadsheet on 24 January, 2019 and was updated on February 28, 2020 to include updates to Ukiyo's games.