A small taste of disco weirdness to get you in the mood for their sets at Winter Freedom Time and Dark Mofo. 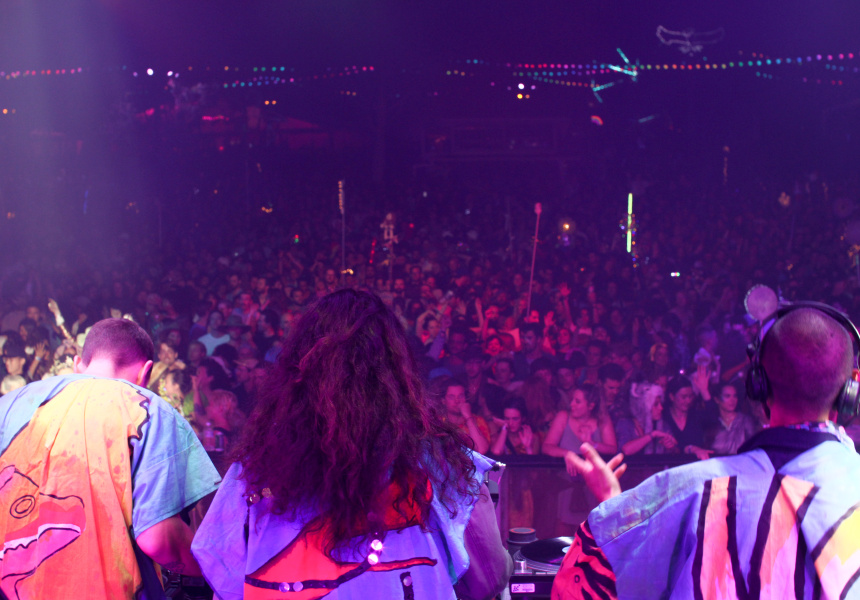 Wax’o Paradiso put on a very good party. As anyone who attended Golden Plains 2017 will remember, their brand of disco, house and Balearic good vibes is an infectious foot-mover.

But for winter the Wax’o boys – Andy Hart, Simon TK and Edd Fisher – have ditched their “Paradiso” moniker to bring you Wax’o Dystopio, the apocalyptic evil twin to their main act.

There will be three stages at Winter Freedom Time in June at Coburg Velodrome, and Wax’o is taking over one of them.

The ancient romans understood the power of a circular venue. While Caesar filled the Colosseum with death and destruction, a different kind of mania will descend on the asphalt crater of the velodrome. (Bleeding gladiators will be avoided, but wild animals are guaranteed.)

On top of the velodrome fun they’ll be playing a fringe event at Hobart’s Grand Poobah during the last week of Dark Mofo. It’ll be an excellent way to cap off a twisted weekend in Tassie.

To show off their new personas and get you excited for winter bacchanals they’ve compiled a YouTube playlist featuring weirdo disco, industrial body music and horror soundtracks. Here's a taste of what's to come.

Get involved, get freaky.

Skatt Bros Walk The Night
Possibly the macho-disco anthem, leather-clad and explicit to boot. Creeper got mad and angry eyes, one look from him can paralyse...

Nitzer Ebb Join In The Chant
Snarling seminal EBM from the British School. To be played on the hour, every hour. Muscle and hate.

John Carpenter Die Klapperschlange
The cult horror composer's soundtrack to Escape from New York. The 12" version makes the film’s score feel like the Bahamas in comparison...

Night Moves Transdance
A classic that was embraced by everyone from Larry Levan to Ron Hardy and became a bridging point between Chicago house, Detroit techno and European synth pop.

"As the church organ from the pits of doom roars the choir sings Aaarrrhhhhhhhh!"

Still as large today as when it was cut on 12" vinyl.