Turning the Museum Inside Out

Melbourne Museum has millions of objects and artefacts in its coffers. For its new exhibition it’s scoured its huge archive for this collection of the weird and wonderful. 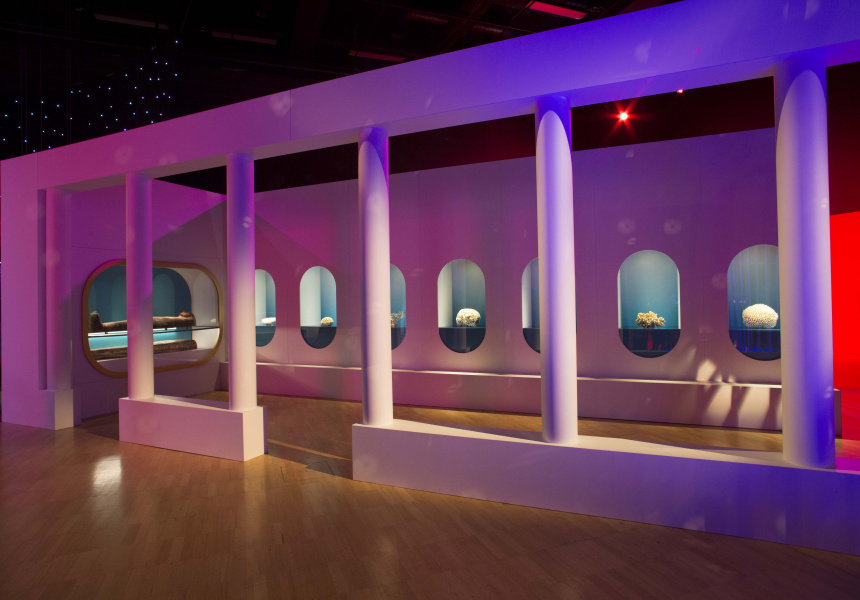 It begins with the statue of the Roman god Mercury, which towered over the Age offices for nearly a century, and ends with a bunch of old motorcycles, via several peacocks, a large bulldog and a series of century-old porcelain teeth.

There are 17 million objects in Melbourne Museum’s collection – a lot of those never before been seen by the public. In what context do curators pull out jars of Javanese tapioca flakes, or a lurid Victorian-era hearse?

Inside Out, Melbourne Museum’s latest exhibition, gives us a peep at the institution’s vast coffers. For Zoe Meagher, the exhibition’s Experience Developer, the show is about conveying the nerdy passion museum staff feel for some of the more obscure corners of the collection.

“There’s nothing quite like the experience of being in the collection with a curator who loves this one particular rock, and really wants to show you,” says Meagher. “That passion is something we wanted to get across. Not just facts about stuff. We wanted to look at the emotional story behind it.”

How often do you get to see an Egyptian coffin from 700 BC alongside the garish 1994 summer collection of watches from Swatch?

But it’s not just a collection of random objects, and instead of labels and reams of text the show is held together by a sassy audio tour guide. The expert voices we hear aren’t all typical experts. There’s an Egyptologist and a doctor of astronomy, but also a drag queen and, best of all, a Preston tattoo artist who has become besotted with a poorly taxidermied otter.

“The one thing it all has in common is an unusual relationship with time,” says Meagher. “The things we collect become immortal.”

In the middle of the exhibition, the audio guide plays a newly commissioned disco track by Vachel Spirason and Matthew Hadley of Total Giovanni. Why? “People talk about disco like it’s dead, but it’s not,” says Meagher. “It’s still there and it still makes you dance.”

It all adds up to something that blows the cobwebs off these old items and reminds us of the defining truth of the museum’s expansive collection: that nothing is ever useless and nothing is ever truly dead.

Inside Out is at Melbourne Museum until February 11, and it’s open late every Thursday and Friday night (excluding January 26).