“A Touch of Manhattan in Elsternwick”: Inside Classic Southside

In partnership with Classic Cinemas, we explore a new and eclectic live performance space showcasing everything from jazz and stand-up comedy, to cult VHS rarities – and giving the south side’s artistic community a vital new venue. 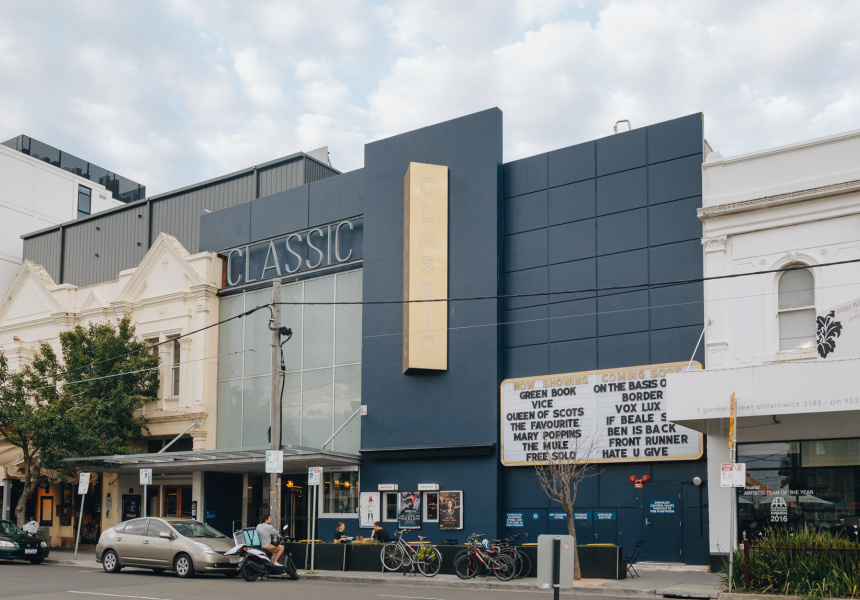 “We love the circus of entertainment,” says Eddie Tamir, owner and creative director of Classic Cinemas in Elsternwick, Lido in Hawthorn and Cameo in Belgrave. “We hope that we deliver good quality experiences in our cinemas. But then there’s something extra – live performance fits into the circus of an entertainment facility, and so that excites us.”

These days, more often than not it’s north of the river that’s seen as Melbourne’s home of quirky art culture. Classic Southside aims to change that by providing a space for audiences to enjoy music, offbeat film and live performance on the south side of the Yarra.

“We want to be known for holding a wide range of live events,” says Tamir. “Much like the way our cinemas screen both blockbusters and arthouse titles. Hopefully we can appeal to our very eclectic audience and give a lot of different people something that’s got a live element to it.”

The space was uncovered during a recent renovation of the Classic Cinema building. “There was an old office in an old part of the Classic, four metres wide by 20 metres long,” says Tamir. “It just took me back to my days in the crazy early ’80s in Manhattan when I used to visit jazz clubs. It was great to connect to that.”

Initially the option was there to turn the space into another cinema. “It was a bit of a last-minute decision, but we said let’s change gear a little bit and try something live there instead.

“It’s a four-by-five-metre stage, it’s got a baby grand piano, a working bar, and it fits 75 people with cabaret seating and some standing at the back. It’s a really high quality room. I really do think you feel a touch of Manhattan in Elsternwick.”

A big driving force behind the decision was the realisation that the south side of Melbourne is currently lacking the kind of smaller performance spaces that dot the northern suburbs.

There’ll be regular comedy and spoken-word performance nights at the Classic Southside organised by social enterprise South of the City. Talkbox (spoken word) and Big Night In (politically-tinged comedy) will alternate each week on Tuesday nights.

There'll also be live jazz music every Friday and Saturday night at 8pm, programmed by Sonny Rehe, owner of Fitzroy’s Uptown Jazz Café. On Thursday nights the vibe will be more indie music, and on Sundays classical music will be given a new spin.

Long a staple of north-side bars and venues, CineCult will take over Classic Southside every second Monday for its trademark screenings of the weirdest and wildest in forgotten cinema.

As the founder and driving force behind CineCult, Ben Buckingham has spent a decade – on and off – showing audiences obscure analogue titles and bizarre compilations. “There aren’t a lot of opportunities for something like this in the public space in Melbourne,” he says, “These days, if you want to see something really different and unusual, you have to work a lot harder.”

Fascinated by the offbeat since childhood, Buckingham and creative partner Liam Jose (co-owner of Fitzroy’s Grub Street Bookshop) have been collecting VHS tapes for years to build up an archive of titles on video that have never made it to more modern formats.

“We’re kicking off our 2019 season with the 1990s children’s classic Bingo, a VHS title everyone I know who has seen it has gone, ‘What is the tone of this film and who was it made for?’” he says. “It’s about this dog named Bingo and they’re doing the classic thing of him being left behind by step parents who hate him and he has to get back to the little boy that he loves, only the journey he goes on is so strange and it’s like, ‘Wait, why is everybody trying to kill this dog?’ It’s ludicrous and bizarre and so hilarious, and at the same time you’re going, ‘Who thought this was a good idea?’”

But there’s more to a CineCult evening than ironic revisitings of demented childhood favourites. “We like to push into unusual areas to try and inspire people,” says Buckingham. “So many times I’ve had people come up to me and say they’ve had nights that they’re never ever going to forget.

“We love all ends of the cinema spectrum, from the art to the trash. For anyone who wants to dive in with us, it’s going to be even more interesting creating that space in Elsternwick.”

There are already plans to sync up the live space with the cinema’s big-screen program. “We’re going to be involved in the upcoming Melbourne Jazz Festival, both the Lido in Hawthorn and the Southside will be screening a seven-film program as part of the jazz film program, which will have a Miles Davis focus. And that will feed back to our music rooms, where there will be live performances in the spirit of the Jazz Festival.”

That’s only the beginning of what’s planned for Classic Southside. “We’re already being approached for standalone gigs and album launches. A lot of very interesting things are coming our way with the energy of the live room,” Tamir says.

“We love that energy and we want to bring that into our cinema.”

Broadsheet is a proud media partner of Lido Cinemas.