Summer at the MPavilion

The MPavilion opens this summer, proving Melbourne is capable not only of good taste, but good ideas. 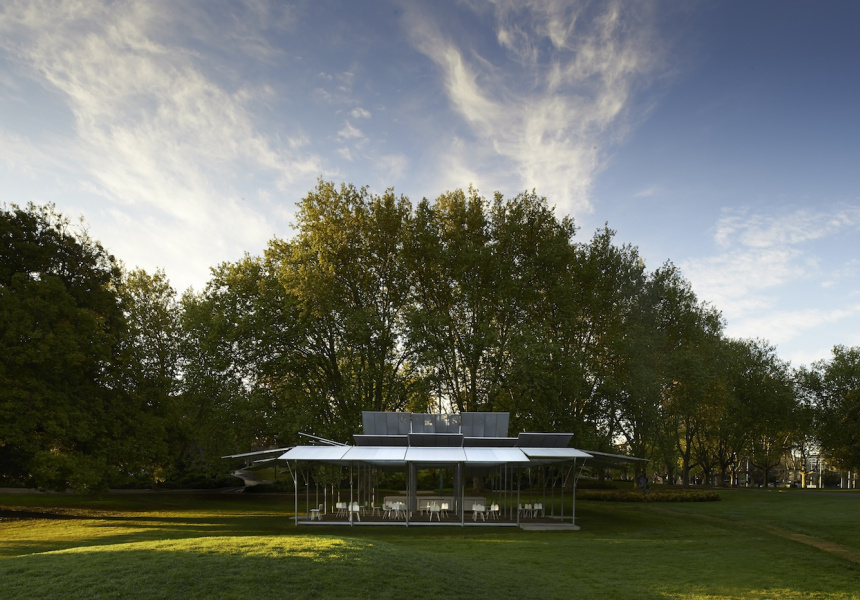 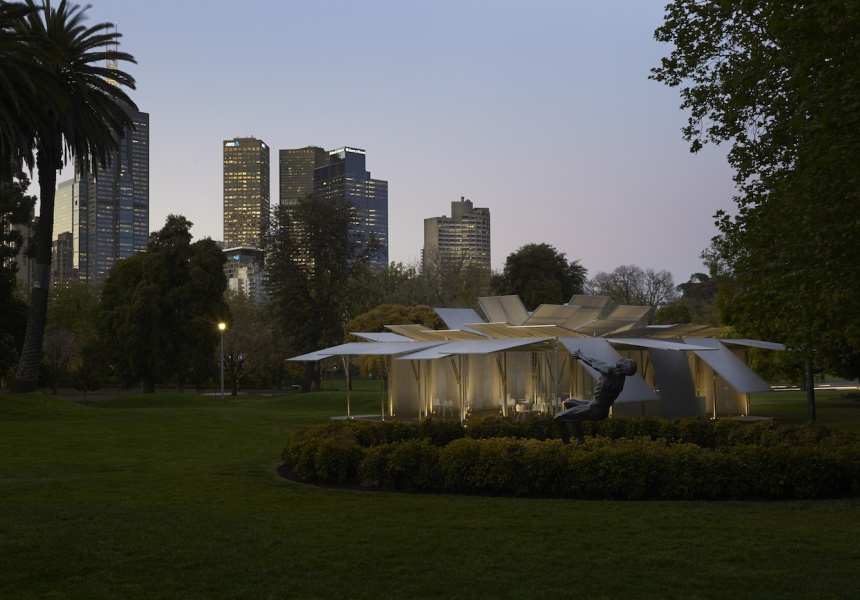 “The basis of the Australian ugliness is an unwillingness to be committed on the level of ideas,” wrote architect Robin Boyd in his seminal work, The Australian Ugliness in 1960. True or not, the controversial piece of literature is just one of the subjects up for discussion at Melbourne’s new cultural hub, the MPavilion. Officially opened today in the city’s Queen Victoria Gardens, the initiative brings an ambitious program of events for the summer months.

Conceived by its patron, Naomi Milgrom, the pavilion takes its cue from the Serpentine Pavilion in London, which invites big-name architects – such as Herzog & de Meuron, Ai Weiwei and Sou Fujimoto – to design a temporary structure adjacent to the popular gallery in Hyde Park.

This southern counterpart is in many ways an evolution of the Serpentine concept. But unlike the Serpentine, Melbourne’s incarnation will also house a hefty events program for the summer. The shelter has been designed by Melbourne starchitect, Sean Godsell, the man behind RMIT’s Design Hub. Drawing from the iconic verandahs and shearers’ sheds of the Australian outback, the light-filled design features a louvered ceiling that opens up to the night sky.

Not only is Godsell’s airy setting beautiful to look at, it will host events that reflect our diverse artistic culture. CEO of the project, Robert Buckingham, says, “There is a strong sense of the pavilion being about Melbourne, and the creative activity going on.” Inviting input from across the board has brought forth a who’s who of Melbourne creatives.

For the pavilion’s senior curator, Natalie King, the idea of a meeting place fueled the program of events. “The idea is to ignite an open conversation across architecture, design, live art, sound and spatial practice,” she says. King’s curatorial approach seeks out the spaces in between. “We want to ask questions without knowing the answers,” such as in the MMeets events, which bring together a range of unlikely creative partnerships. For example, you can take yoga classes with local fashion label, Kloke, go for a walk with The Good Copy, or create body architecture with Sibling.

Another feature of King’s program is the One Night Stand series, which takes place under the night sky of Godsell’s pavilion. The curator explains that she looked at, “what happens under the cover of darkness, outside of bureaucratic hours.” It’s a sentiment that she hopes will lure discussion out of institutions and into the gardens.

Though a lot of the talks and lectures programmed are niche, there is also a lighter side. Visitors to the pavilion can either wander through at their leisure, with an Everyday Coffee in hand, or come for some of the scheduled events. Either way, there’s plenty to add to the diary this summer.

MTalks: Naomi Milgrom, Sean Godsell and Julia Peyton-Jones
Tue October 7, 6pm–7pm
Opening an ongoing series of lectures, this talk brings together the heavyweights of the project: patron Naomi Milgrom and architect Sean Godsell in conversation with director of London’s Serpentine Galleries, Julia Peyton-Jones. The event marks the first of many conversations at the MPavilion, putting Melbourne’s design community under an international lens.

The Australian Ugliness Lunchtime Readings
Lunchtime every day (except Sundays)
Though Boyd may never have anticipated the lasting effect of his statement, more than 50 years on it still ruffles feathers. His classic piece of local literature is up for discussion with lunchtime readings from the book at the pavilion each day. The readings encourage Melburnians to stand up for themselves and challenge Boyd’s claim.

MMeets: Make Meet with James Gulliver Hancock and Assemble Papers
Sat November 1, 10am–3pm
Melbourne’s The Office For Good Design has put together an impressive selection of meetings that are sure to create chemistry. The MMeets series kicks off with a Make Meet with illustrator James Gulliver Hancock, who will take visitors on an illustrated treasure hunt for Melbourne’s hidden civic gems.

One Night Stand: Slow Art Collective Leaf House Music, Installation
Sun November 2–Sun November 9 during opening hours
For the duration of the MPavilion, Slow Art Collective will be creating its large-scale installation in homage to the pavilion itself. But the artists will be taking their time, gathering materials from the surrounding gardens to slowly build up the work of art.

MRelay
Sat January 31, 12pm–10pm
Closing the MPavilion with sporting spirit, the MRelay is a mammoth interview series. Taking its cue from Hans-Ulrich Obrist’s Memory Marathon at the Serpentine Pavilion, each speaker answers a question and moves the event forward by passing a question on to the next.

MPavilion runs from October 7, 2014 to February 15, 2015, and will be open every day except New Year's Day. Entry is free. MPavilion is located in the Queen Victoria Gardens, opposite the Arts Centre on St Kilda Road, Melbourne.