We spoke to lead singer Vachel Spirason about suburban swimming pools, making disco on the dole and why Total Giovanni is quickly gaining a reputation as one of Melbourne’s most outrageous live acts. 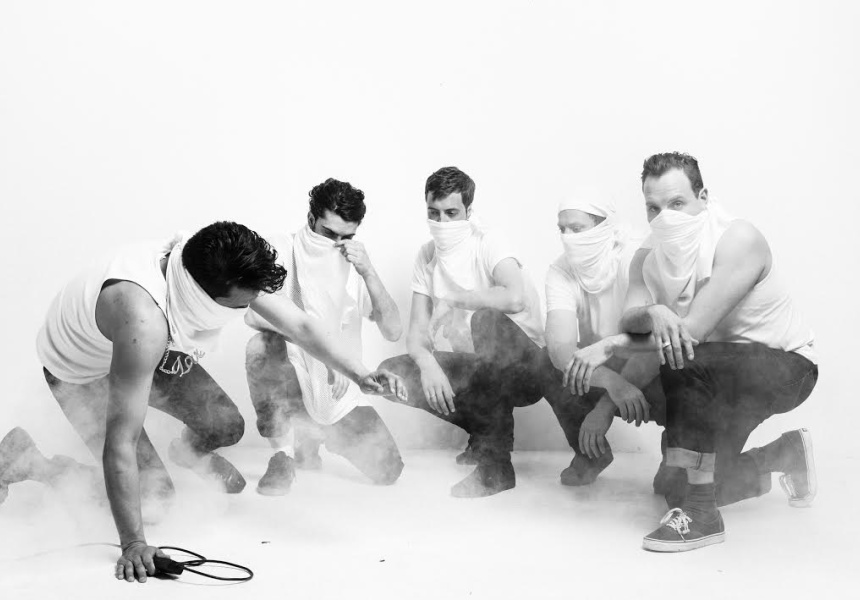 “I call this look Versace Country Club,” says Spirason, who sits sprawled in the sunlight at Allpress Espresso in Collingwood. His all-white outfit and stack of fluorescent necklaces are reflecting the sun almost blindingly. “This is what happens when I haven’t slept – I spend all morning gardening and playing dress ups.”

Spirason is the lead singer of Total Giovanni; the irreverent, charming and impossibly energetic funk and disco outfit that has emerged from the edges of Melbourne.

“I grew up around St Kilda, Jules is from Flemington, we’ve got a couple of Frankston boys. So, we’re working-class heroes, basically,” says Spirason.

“We met each other during various stages during our youth and manhood … we used to throw wild house parties and DJ around Melbourne to make money when we were poor.

“We’re still poor, though. I’m on the dole and work cash jobs. But I think that’s ok because it keeps you honest.

“I think the dole is pretty important if Tony Abbott wants his daughters to have nice music to listen to.”

It was in 2013 that Total Giovanni literally emerged from the underground, playing in the Degraves Street Subway at last year’s Melbourne Music Week. Twelve months later, the band is releasing its first single Human Animal – a wholly danceable funk jam reminiscent of both Talking Heads and LCD Soundsystem. It’s also locked in for Golden Plains Festival in 2015, just supported Architecture In Helsinki at the opening night of Melbourne Music Week and recently played in the Lavazza tent during the Spring Racing season.

“That really was the crème de la crème,” says Spirason of the Lavazza gig. “Seriously, there was lots of crema, lots of coffee everywhere.”

“I’ve never been to the races so it was a bizarre and lovely experience. We were there in our semi-naked state surrounded by girls in fascinators.”

Fortunately, these tastes of the high life are yet to unsettle the tight-knit group.

“By now our systems of dispute resolution are well developed, and actually we generally share money, girls and drugs. Jules has kissed most of my girlfriends before I have,” says Spirason.

“But seriously, this has all been fast tracked by how well people have been receiving the single, and we’re in no hurry to do anything but keep playing live.”

And it’s Total Giovanni’s frenetic live act that has people talking. Playing all originals – aside from one “half cover of a 1970s Balearic jam” – Total Giovanni is known for pushing out some serious sound in its quest to get dance floors started.

“Melbourne’s lucky in that we have so many small- to mid-sized venues that you can pack out. That way the sound can’t escape,” says Spirason.

“It’s a collaborative energy, like creating a whirlpool in a suburban swimming pool. We all run around the edges, and if we run for long enough, it just carries us. That’s what live dance music should be.”

On stage, Total Giovanni is undeniably an outrageous spectacle. Five men jumping around in leopard bike pants and berets is pretty hard to ignore, and costumes in the works for upcoming gigs include “Leopard Samurai” and “Turkish Strong Man”.

“Turkish Strong Man may have to wait until I’ve got more sheep skin,” says Spirason. “It’s not easy finding stuff that will fit five people. I spend a lot of time at Savers.”

The band has two more singles on this summer’s horizon, one a “straight up disco track and one a throwback to French house”.

For the moment, Spirason has hopes that Total Giovanni may become more than just a side project for the band’s four other members.

“It’s hard because we rehearse late at night and everyone’s knackered after work. I think the next stage is for all of us to get on the dole.

“Get on the dole, make some disco music. Those are the things that are important in life.”

Total Giovanni is launching its single Human Animal at Shebeen Bandroom on December 20 and tickets can be purchased here.