Uncle Jack Charles speaks about his role as Aboriginal leader William Barak in the latest production of Coranderrk: We Will Show The Country now showing at La Mama Theatre. 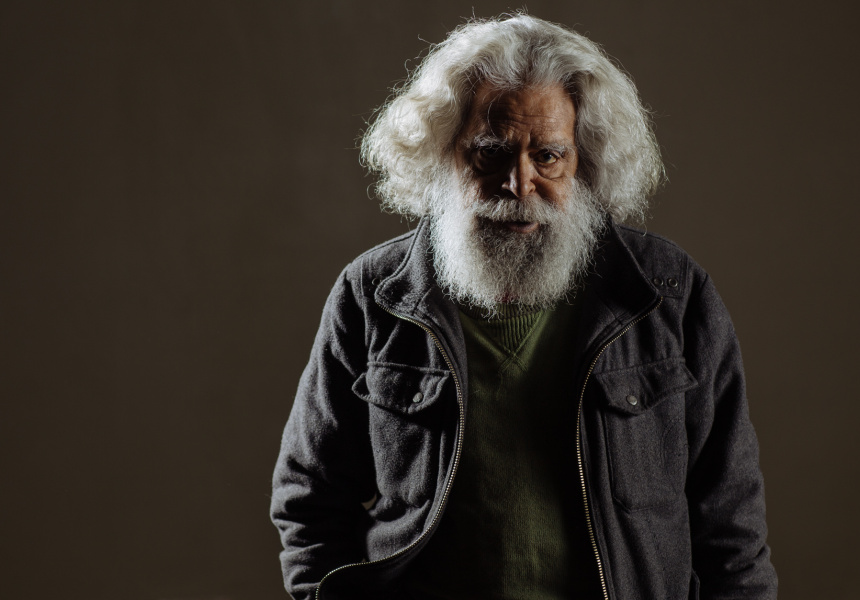 The past has been cruel to Uncle Jack Charles. Stolen from his mother as a year-old baby and robbed of his connection to his country, his extraordinary acting career has been interrupted by imprisonment, homelessness and addiction. And the past remains very much alive in his latest performance as Wurundjeri-willam elder, William Barak, in the play Coranderrk: We Will Show The Country.

Based on the real-life testimonies of Indigenous Australians who appeared before a Victorian parliamentary inquiry to fight a decision of the Aboriginal Protection Board to close down their self-managed farming community, Coranderrk still cuts close to the bone. The same words spoken by actors at La Mama theatre were spoken by the men and women of the mission in 1881.

The Coranderrk community was a hugely successful, sustainable farm on the outskirts of what is now Healesville. When the Aboriginal Protection Board decided to close the mission, the residents marched the 80-kilometres to Spring Street to appeal to the parliament. “Trudging down through the high growth and recently cleared land, farmers would stop them and they’d come down with bowls and gifts of fruit for the mob,” says Charles. “There were good stories like that. But there were areas also, if they hadn’t have walked as a mob, they would have been picked off.”

And for Charles, it’s deeply personal. “With Coranderrk, I have a great sense of pissed-offedness how each and every one of those farms that surround and are in our valley there are illegally gained,” he explains in his unmistakable baritone. “They murdered my great-great grandfather.”

As a member of the stolen generation, Charles, at first, knew very little about his Kulin heritage. But the play uncovered some connection to his family’s 60,000-year history in Boon Wurrung and the Wurundjeri regions, where he discovered his great-great-grandfather, Johnny Charles, lived on the mission – and was killed by a squatter nearby. “Through the story, he found his own connection to his mob,” says Giordano Nanni, who co-wrote the performance with playwright Andrea James. “When he was reading the transcript, and saw the name, he of course pricked up. That helped him put a piece of the puzzle together about his family history.”

Nanni, a historian, came across the testimonies while studying for a Ph.D. at the University of Melbourne. “I stumbled upon the transcript of this parliamentary inquiry from 1881, and immediately I was struck by the fact it contains the actual testimonies of Aboriginal people,” he says. “I wasn’t looking for performance material, but it really jumped out at me. It wasn’t a huge leap to re-enact it, because it was so real, and the characters are just brilliant.”

Because it was such a significant piece of history, Nanni approached the Yorta Yorta writer James in order to have an Indigenous Australian take the lead on the project. “The collaboration worked really well. We both have a creative existence, but I came from a historian’s perspective, and Andrea came at it from an dramaturgical perspective.”

As a verbatim performance, every word spoken in Coranderrk: We Will Show The Country was actually spoken at the inquiry – whether by Aboriginal leaders or settler squatters, such as Edward Curr. Ngurungaeta Barak – played by Charles – looms large over the inquiry. “His power and voice speaks with so much clarity and power,” says Nanni. “We didn’t do anything but edit the original transcripts. We didn’t have to use any embellishments to bring that out.”

After founding Australia’s first Indigenous theatre company; after his “education” on the third, fourth, fifth and sixth floors of Bendigo Gaol; after touring the world with his one-man shows and after appearing in big-budget films, Charles says he’s emerged as a lore man. For his part, Charles feels as though he’s earned the right to speak as Barak on the stage. “I’ve taken on this role because I know who I am and who I ought to be,” he says. “I’ve taken on that role as leader, ngurungaeta role, that William Barak has taken on.”

Nanni believes there are profound connections between the events of 1881 and now. To his mind, the suppression of conversation about racism in Australia has inadvertently overflown, allowing the country to have a debate that while traumatic, is ultimately therapeutic. “At a very fundamental level, it stimulates conversation about the most fundamental issue in this country, which is the history of racism between Indigenous and settler peoples,” he says. “I like to think Coranderrk opens that conversation in an ideal way – it presents both the light and the dark. It also contains an incredibly positive narrative, which is very valuable for us today because it serves as a model for collaboration, and how to bring about a more just society.”

Uncle Jack mightn’t be as optimistic about the future of reconciliation, but he’s no less determined to speak truth to power. “None of us intended to go out into life to be criminals,” says Charles. “I’ve had to strike out myself on my own once I failed my foster mum. I found my indigenousness, and that fucked me up. We came out into our communities, and that’s what set me off into jail in the first place.”

Respected as he may deservedly be, he’s not, however, waiting for a call from the PM. “He’s British, and he thinks British,” he says, stormily – then laughs: “I know he’s never going to give me a knighthood!”

UPDATE: In a one-off performance, Coranderrk: We Will Show the Country will show at Coranderrk itself (at 19 Barak Lane, Healesville) on February 21, 2016. Tickets can be purchased via lamama.com.au. Since publishing, this performance has now sold out.