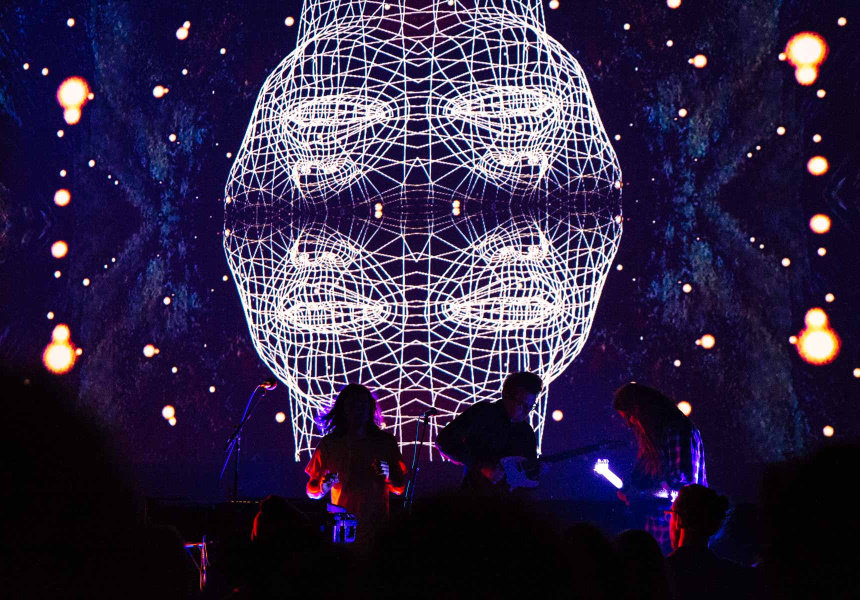 Blending musical experience with cinematic immersion, The Shadow Electric is transporting its 34-metre cinema screen to a former Brunswick theatre for a fleeting music and video collaboration.

Music will melt into art, and art into performance, as local and international performers adapt their music for the big screen in an underground audio-visual spectacular. Think psychedelic dance party for the artistically inclined.

Artistic offerings from Teeth & Tongue and The Bombay Royale will bookend the weekend line-up, with Rat & Co taking the Saturday-night slot. The headlining bands have collaborated with video and lighting artists such as oliverEllmers/ to transfigure their music into a multimedia banquet. There’s also a rare live appearance from satirists Juice Rap News, suburban Melbourne’s answer to Russell Brand, with comedian Nazeem Hussain and DJ Manchild on Sunday.

“It’s an evolution of what we already do at the Abbotsford Convent,” says Shadow Electric co-founder Dave Chestwig about choosing to experiment with audio-visual performance. He cites a culmination of its summer outdoor cinema and its all-year bandroom as the inspiration behind Visions. “Now we’re doing both at the same time!”

Following the trend set by Melbourne’s cinema renaissance, Brunswick’s historic Estonian House will be resurrected to its former-theatre glory for the weekend of the multi-medium exhibition.

“It hasn’t been used as a commercial cinema since the ‘70s,” Chestwig explains. “It’s a dream for us to access such a charismatic space.”

Visions is on this Friday, Saturday and Sunday. Estonian House is located at 43 Melville Road, Brunswick. Tickets on sale now.