The ex-Flight of the Conchords star tells us about his life in comedy, ahead of his Australian tour. 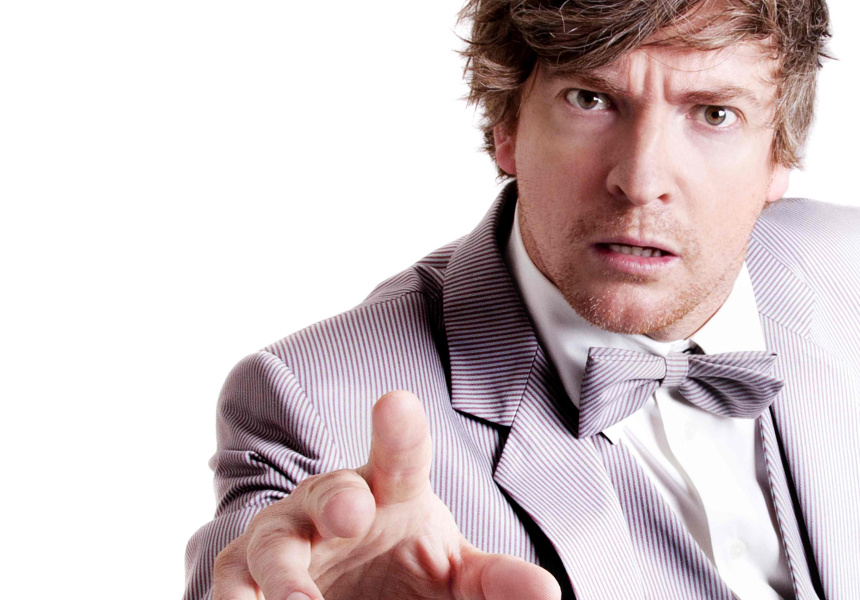 Rhys Darby laughs awkwardly at the suggestion we begin our phone call by taking a rollcall. It seems people have tried to break the ice by bringing up his role as Murray Hewitt in Flight of the Conchords before.

He soon recovers himself though and steps up, saying, “Right, who’s there? Is that Max, present?”

I acknowledge my presence.

“OK. Rhys, present. Right that’s both of us,” he continues. “Let’s move on. What’s first on the agenda? You’re running this meeting aren’t you?”

That’s my cue to get things started.

Broadsheet: Are you often still asked for a rollcall?

Rhys Darby: No … most people have moved on from that joke. [But] it’s good to see it come back. It’s almost retro now.

BS: Do people still associate you with your role in the Conchords?

RD: Certainly … it’s still the first thing they bring up. It’s the thing that made me famous and it’s never too far away from my heart … I enjoyed it so much [and] I can’t deny the fun that’s come from it.

BS: What can we expect from the upcoming Australian tour?

RD: I’m doing the best material from the last two shows – both of which I didn’t take to Australia – that’s This Way the Spaceship and my new one, Mr Adventure … it’s all killer, no filler.

BS: This Way the Spaceship is autobiographical, right?

BS: You’re now based in the US, do you find Australian and US audiences to be different?

RD: I think those people who are at my show are there because they get me anyway. They get the Kiwi-ness and they laugh either with it or at it.”

[But I think Australian audiences] get the New Zealand-ness even more than the Americans would. I don’t have to pussyfoot around it or change words here and there. You guys know exactly how we tick and there’s a comfortableness there that I always look forward to.

In general [Americans also] have a straighter sense of humour. It’s not quite so surreal or silly.

BS: Was starting out as a comic nerve-racking?

RD: You’ve got to remember that I’ve been laughed at ever since I was a kid. All through school I was the class clown. I would always think outside the box and create the weird answer that wasn’t necessarily correct but it got people laughing. And when I was in the army I had the same sort of notoriety for being a bit of a fool.

Someone once said to me that I had funny bones and could do pretty much anything and people would laugh. It didn’t necessarily give me confidence or cockiness, but it let me think that well, you know, that’s my talent. And once I realised that’s what it is, I dropped all my other jobs and concentrated on the one that was possibly the most risky but ultimately would give me the most pleasure – because I felt like that was my purpose in life.

BS: Was it hard to breakthrough?

RD: Yeah, absolutely. [But] I just took every opportunity and was lucky enough to be bundled with a bunch of guys who also took opportunities.

[They] took me to the Edinburgh Fringe Festival and … I ended up staying in the UK for like eight years after that. Basing myself in London and just being there on the stages of where stand-up was really hot rock’n’roll at that time.

Being from New Zealand and having that difference about me and the way I performed, I just kept rolling with the punches … and seeing who else I can dance for.

BS: Last question: is there any chance of a Flight of the Conchords reunion?

RD: The only people who can answer that question are Bret and Jemaine … it really comes down to those two. It’s their baby and they’ll just pull me in. I’m just their cohort, I’m the Robin to those Batmen.

Rhys Darby is performing at The Forum Theatre on October 11 and 12. For more information and for tickets head to rhysdarby.com.