Joey Bada$$ talks staying independent and why Kanye won’t work with him. 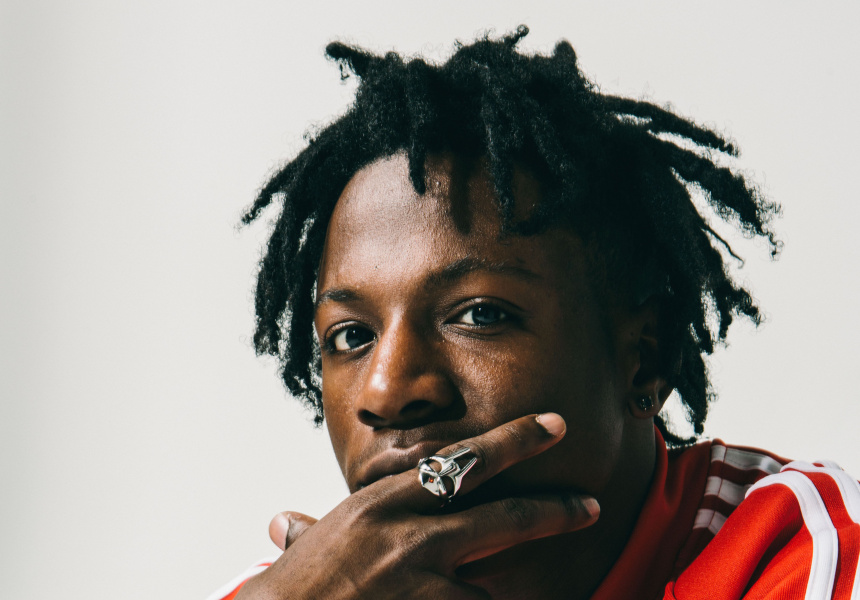 Brooklyn rapper Joey Bada$$ is back in Melbourne again, apparently not worried about coming back to Australia after the tumultuous events of his last visit.

Joey, originally Jo-Vaughn Virginie Scott, co-founded hip-hop collective Pro Era in 2011 at the age of 16. A year later he famously turned down a deal with Roc Nation (Jay Z’s label) in order to hold onto his artistic freedom, which, after chatting to him, feels entirely in character. He seems impatient with the kinds of places his fame is taking him (read: media and big business). He’s young and has big ideas; he just wants to be left in peace to develop them, and do his music his own way. If you’re into it, great. If you’re not, well, it doesn’t seem like he cares that much.

Work and collaboration
Both Joey’s mixtapes (1999 and Summer Knights) stirred hype. His debut album B4.DA.$$ may only have come out this year, but he’s racked up collaborations with pretty much any hip-hop MVP you want to name: Kendrick Lamar, MF Doom, A$AP Rocky, The Roots, Ab-Soul, DJ Premier, Q-Tip, Danny Brown, Pete Rock. Even – kind of – with the late legend J Dilla.

But Joey’s favourite person to work with? “Probably my brother Kirk Knight (Pro Era’s youngest member). We have such an in-depth understanding of each other, and who we are, and where we are at. I count him as my best friend. There’s nothing like making music with your best friend.” He says Knight’s project Late Knight Special comes out October 30. “I definitely want people to follow that.”

Hip-hop is a genre dominated by nostalgia, and there’s a lot of talk about about the strong ‘90s influence on this current album. Joey is dismissive of most of it. “People just haven’t experienced, like, real lyricism since the ‘90s, so they have no choice but to compare it to that. But listen to the lyrics. Listen to the whole body of music. It’s very contemporary, in my opinion.”

The limits of the music industry
“I’d love to work with Kanye,” says Joey, “but I don’t think he’d be inclined to work with me. So I probably won’t. I don’t want to prejudge it, but I just feel like he looks at me like, ‘Oh yeah, he’s doing that ‘90s boom bap stuff’.”

It sounds like Joey deals with this kind of assumption a lot. “I feel like that’s how a lot of people in the industry view me. They don’t really take the time out to actually sit down and listen to my shit. So it’s just like, until I make like a hit there’s nothing I can really do for them. But you know, it’s all good. I’m still living the life."

He acknowledges that labelling things in the music industry is “common sense”. “But for artists it’s different. We put so much time and energy and effort into the product, just for one person just to call it one word.”

On playing live and how to appreciate Joey Bada$$
“You can’t just play one song and you understand me, or everything I say in that one song. I bury things so deeply beneath the surface.

“The best way I like people to discover me is at a show. When people see me for the first time, it’s really an experience. I think it’s almost impossible not to like me after you see me live. It is that golden opportunity to really give back to the people who rise for you.”

Does he feel pressure to succeed? “In some ways – when you’re about to release an album – but I actually like the pressure. Because, you know, that’s how diamonds are made.

“And you know, it’s all good. I’m not trying to make anyone think different. If you can’t see, then you can’t see. But at the end of the day, I’m a fighter, I’m a warrior and I’m going to keep working hard.

“You’ve just got to see for yourself.”

Joey Bada$$ is playing Listen Out Melbourne on Saturday September 26.