The Perks of Being a Wallflower

We hang out with 17-year-old musician Gab Strum, AKA Japanese Wallpaper. 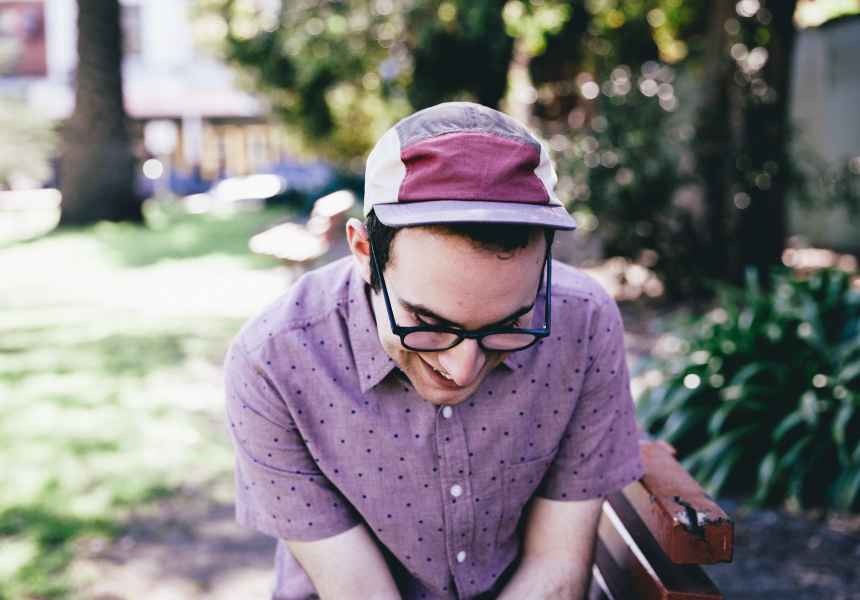 Gab Strum has had a pretty big year. He played Splendour in the Grass for the first time. His song, Breathe In, featuring vocalist Wafia, is on the soundtrack to Zach Braff’s crowdfunded film, Wish I Was Here, alongside Coldplay, The Shins and Cat Power. He’s also busy knuckling down to his two VCE subjects (music and Hebrew).

“I was not expecting it at all. I was on school camp as well, so I had to get up early and find where there was reception. I nearly slept through it,” he says.

Wearing an upturned cap and magnifying, thick-rimmed glasses, the 17-year-old is a quiet talker – still as shy and slightly awkward as any high schooler – but he articulates himself with a clear maturity.

He’s finding that “the age thing” is something he’s talking about a lot in interviews – including with us.

“I don’t know if I like it. The aim is for people to just like the music, and not think ‘it’s pretty good for something a 17-year-old did’. But if it’s a good talking point, or people judge the music a little bit kinder, that’s okay.”

He’s being modest. The exposure he’s currently receiving from Triple J and Wish I Was Here is tremendous. He’s still not sure exactly how Braff managed to find his track on Soundcloud, but he’s stoked that it happened.

“It’s in a pretty good spot in the movie as well. The son just finds out his dad’s dying, and he’s got to run to the hospital to make it in time.”

At school, he’s not given any special treatment by his schoolmates – he doesn’t think they’re really aware of what he’s been up to, or maybe aren’t that interested. His friends can’t even to come to his gigs yet, although he still manages to draw a crowd. “The gigs are all over 18. And my friends aren’t 18 yet,” he says.

Strum is certainly riding a popular wave of independent electronic music in Melbourne, yet his songs seem to drift on a different plane to the others. While so much of local electronic output tends to be melancholy, minimalist or even ironic, Japanese Wallpaper’s sound is unmistakably uplifting in tone.

“I don’t really have that many sad things going on in my life at the moment. It’s a product of being a teenager… in Caulfield. This feels a bit more honest.”

“It’s a bit less laid-back [the single]. It’s not a dance track, but you can move a little bit.” He laughs: “One thing I noticed from playing shows is my music is at a really awkward tempo for people to watch because they can’t really dance. Everyone ends up sitting on the floor, which kind of sucks.”

Japanese Wallpaper’s single, Between Friends, is out now. He’ll be launching the single at Shebeen on Sunday September 21 and 28 (new date). Tickets available here.