The much-loved Scottish DJ duo is back in Australia for Melbourne Music Week and a date this Wednesday with the Pachanga Boys. We chat with one half of Optimo about a decades-long career built on making people dance. 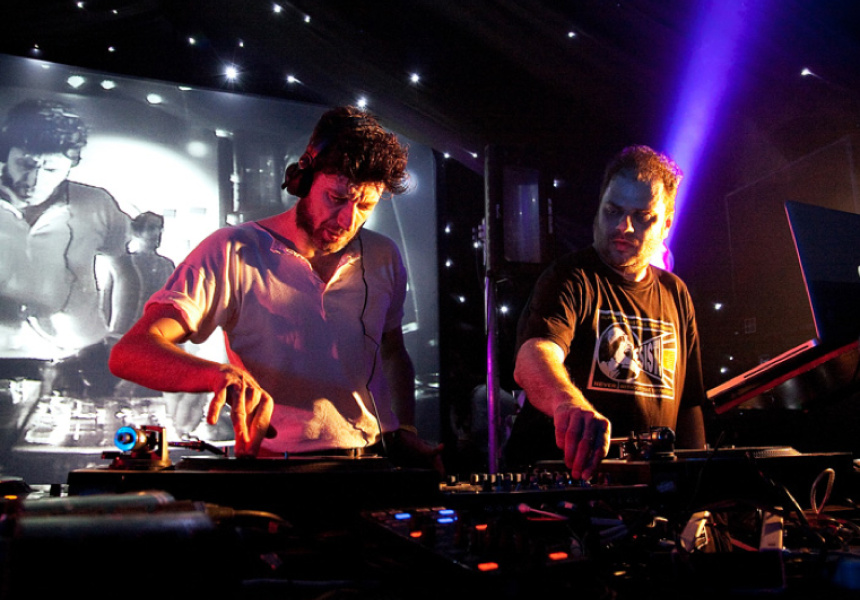 Think about most DJ sets you’ve heard this year. More than likely, they’ve been long explorations into a singular style or sound. While there’s nothing wrong with spending a few hours down a dark tunnel of drum and bass or sweating it out to one euphoric disco anthem after another, there are DJs who bring a different approach to their dance floors.

Of those style-hopping selectors, few hold a place in clubbers’ hearts like Optimo does.

The two Scottish DJs – Twitch and Jonnie Wilkes – made their name with a now-legendary residency at Glasgow’s Sub Club. As word of Optimo’s particular dance-floor magic began to spread, a devoted crowd of locals was increasingly joined by visitors from around the world. A record label, dozens of productions and hundreds of international dates have followed. Having played records for more than 25 years, Optimo is now busier than at any point in its career.

Speaking from his Glasgow home before heading to Australia, Jonnie Wilkes is happy to talk about why this might be. In fact, he’s happy to talk about almost anything, and over the course of an expansive chat, it becomes very clear that while he and Twitch create a riot of fun, they take their jobs deadly seriously.

“When a DJ applies themselves properly, one of the things he or she is able to do is get inside people’s heads to find the things that make a crowd move,” he says. “To make a good connection with a crowd, you need to be able to grasp whatever that thing is.”

“I believe it’s a responsibility to do that as a DJ or an entertainer,” Wilkes continues. “You’ve got to let your own ego go and take on board the feeling that’s in the room. It could be the time of year, the time of day or taking into account certain cultural or political things happening at that moment. All these factors influence what you play and how you present it, considering whether it’s going to be a very long extended set,the type of space - a basement or outdoors, or what you know or have learnt about about a certain club, a certain country. I don’t ever want to over-intellectualise it, and certainly, some DJs are not like that. Some have a pre-determined notion of what they’re going to play every set, but in the clubs and parties we find ourselves in, we don’t do that. We just bring a range of music with us and keep our direction open right up until a few minutes before we begin.”

While a lot has been written about Optimo’s open-minded, open-eared approach to DJing, the roots of its sound, and the roots of its love for it, are planted in the early days of house and techno.

“We both started to play around 1987-88, when the first house records were being made,” Wilkes says. “We were absolutely taken in by this new electronic music.”

Wilkes remembers vividly first starting to pick up these records and beginning to love the hypnotic elements of music for the first time. “I was totally seduced by it,” he smiles. “I guess it’s in me now. I don’t know why (house and techno) the basic elements continue to appeal to the human psyche and why it has so much longevity, but somehow it has. I’m still finding so much that’s inspiring me.”

That said, it’s not remotely all he listens to. While we speak, he walks into his living room and starts leafing through the LPs sitting next to his record player. “John Bender - Pop Surgery, Joe Meek - IHear A new World, Bob Chance - It’s Broken!, Astrology Songs by Harvey Sid Fisher … there’s John Fahey, The Upsetter, Alice Coltrane, Terry Riley … at home I certainly don’t listen to dance music unless preparing for a gig.”

One thing he has started doing at home, at least in Glasgow, is playing at the Sub Club again. “We decided after a two year break we’d begin to promote a local party again, we were just missing it that much,” Wilkes says. “When we began playing here again we were very … relieved, I think, to see a whole lot of young people coming to hear us play, not just regulars from the old party. In Glasgow, young people into electronic music really feverishly research their stuff. They want to know what’s going on. To get those clued up young people along to our party is a really nice thing. I’m glad it hasn’t ended up being about ‘back in the day’ - that’s something that really doesn’t interest us to be honest.”

“I’m not sure why we’ve had such longevity,” Wilkes says, when I ask if he ever thought he would have made a living from DJing. “I am forever grateful for having this job and being able to travel the world with Keith to places where people want to come and hear us. I don’t know if people can tell how much you love something and how deeply you’re in to it, maybe they can. Maybe people want to share that with us and that’s a wonderful opportunity. We’ve been incredibly fortunate.”