On a day just like any other, Courtney Barnett walks into her local. As she tells it, a conversation sparks between herself and a punter:

Customer: “Excuse me, but you look really familiar.”
Courtney Barnett: “Well, I kind of play in a band ... maybe you’ve seen me around?”
Customer: “I know, you look just like Arya Stark from Game Of Thrones!”

It’s known within Melbourne’s music circles that before Courtney Barnett was playing Coachella or performing on Jimmy Fallon, she got her start behind the bar at the Northcote Social Club.

Nowadays Barnett claims an international reputation far beyond the corners of High Street and Hawthorn Road, but her devotion to this simple pub and band room is unwavering.

Barnett fondly recalls, “When I first moved to Northcote, I was shy and didn’t have many friends, a job or any money. I got a free ticket to see Adalita at the NSC (thank you Jess Ribeiro) and I asked if I could get a job behind the bar. One quiet Tuesday night, I asked my colleague Emily Ferris to help me come up with a title for my first EP (it ended up being called: I’ve got a friend called Emily Ferris). I got paid to see so many good gigs there and all I had to do was serve a couple of beers and clean up some spew every now and then.”

This year, Northcote Social Club celebrated its 10th birthday, and after a brief hiatus for refurbishment, has reopened with a new menu (by chef Martin de Korte) and a fresh lick of paint. Over the past 10 years, Northcote Social Club has come to mean a lot of different things to a lot of different people, and after a decade of activity, we decided it was time to excavate the archives of memory to unearth some nuggets of nostalgia.

Venue manager Andrew Mansfield, Kris Schroeder of The Basics and the Brisbane-based Danny Harley (The Kite String Tangle) reflect upon the good times spent at Northcote Social Club. Consider it a scrapbook of memories, relaying the anecdotes and stories that have come to define their time in Northcote.

Broadsheet: First things first. What does the Northcote Social Club mean to you?

Andrew Mansfield (NSC venue manager): It’s not just about the drinks or the music, it’s about the camaraderie of living in Northcote or the north side. Pubs should offer a hub for the community, a second lounge room. If you spend enough time in a space, you start to take pride in it and it factors into how you see yourself.

Kris Schroeder (The Basics): The Social Club is the centre of Northcote. One of my criteria for accommodation when I first moved to the area was that it had to be within walking distance from the place. There are very few afternoons I don't drop by for a pot with my mates – it sounds a bit like Cheers, but actually it really is.

Danny Harley (The Kite String Tangle): It’s a special place with many special memories. I remember I did four Northcote Social Club shows in a row, and it was at that point that it started sinking in that I might be able to do this as a career.

It also means nachos (they have really good nachos). And Clint the sound guy, he’s a legend.

BS: How about any memorable performances? Any famous faces that you’ve bumped into, or any notable ears you’ve chewed off?

AM: The Pixies coming through here was enormous [they played a secret show in 2007] and Lady Gaga caused quite a storm [she wrapped up the Victorian leg of her Born This Way Ball tour with a wild night at Northcote Social Club]. Those random, one-off things are fun, but they don’t define you. I guess for us, it was working and hanging out with Courtney Barnett before she exploded. Her first EP is named after our then bar manager, Emily Ferris. When you’re naming an EP after one of your work colleagues, it’s testament to the level of connection you have with a place.

KS: Our two live albums and DVD were recorded at the Northcote Social Club, so I'd like to think we’ve given a couple. But aside from that, I'd say the David Liebe Hart gig (famous for his appearances on Tim & Eric Awesome Show, Great Job! ) a couple of years ago was a wild ride.

Like I said though, every day at the Northcote Social Club is a notable one. I think the thing that makes the NSC what it is (other than the regulars) is the staff. They're so incredibly patient and good for a chat, I like to think of them as friends. They're the unsung heroes of the place and it wouldn't be the same without them.

DH: All four performances were very special to me. Kilter and I also went skydiving in the middle of those shows, which made it even more surreal.

I met Mark Wilson (JET guitarist and A&R for Warner Music) for the first time at NSC – he later signed me to Warner. I also met Richard Moffat (director at Way Over There) who has always championed my career.

BS: Give me your most outrageous NSC anecdote.

AM: The past 10 years seem like a bunch of boozy nights. Too much loud noise, and there it all went – 10 years of good. God knows I’ve been scuppered in here enough times to have done all sorts of things. I tell you what – get on the blower, tell your editor to come down on a Friday night, and we’ll see how they bear up under the Jägermeister. Then you guys can talk about your own experience at Northcote Social Club.

KS: Most Basics shows are held together by slip-ups, so that goes without saying really. Our most recent gig – under the pseudonym Tinder Knight – saw us invite people to give us chords and lyrics to songs and we'd do our best interpretation of them. One of the highlights, is the trainwreck that is George Michael's Freedom! '90. There's so much going on in the song, and Tim and I really didn't know it very well at all. Wally De Backer (Gotye) is doing his best to hold it together but just failing at every point. That is, until we get to the chorus and he just nails it.

BS: As corny as it sounds, can you sum up the Northcote Social Club in one sentence?

DH: A quintessential Melbourne venue that is a vital pit stop for all artists.

KS: Hip without being hipster, the NSC is the type of local that has one thing that others only dream of – soul. 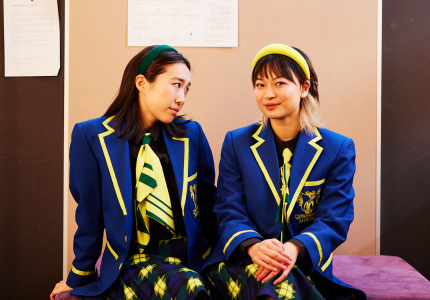