Confronting and Contradictory: 10 Years of No Zu

Breaking down the Aussie psyche, one “Ya Ya” at a time. 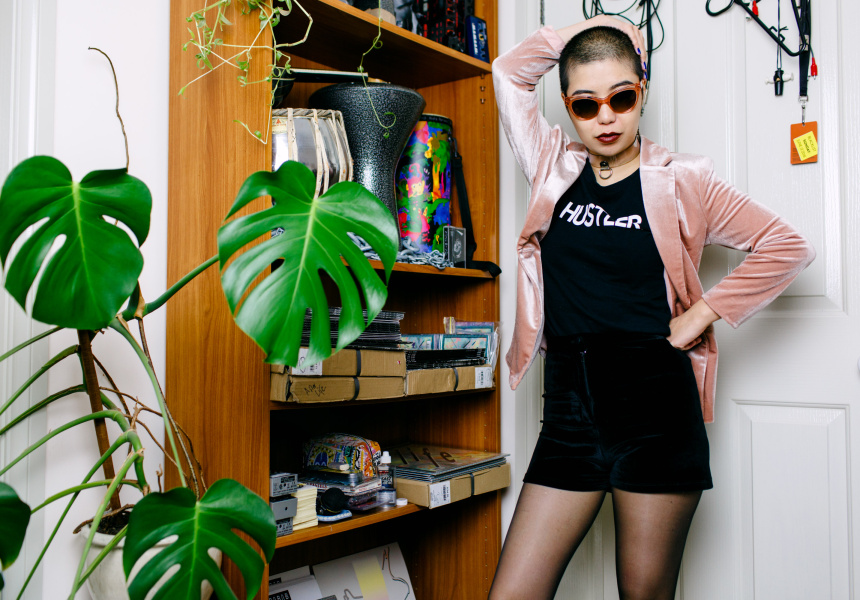 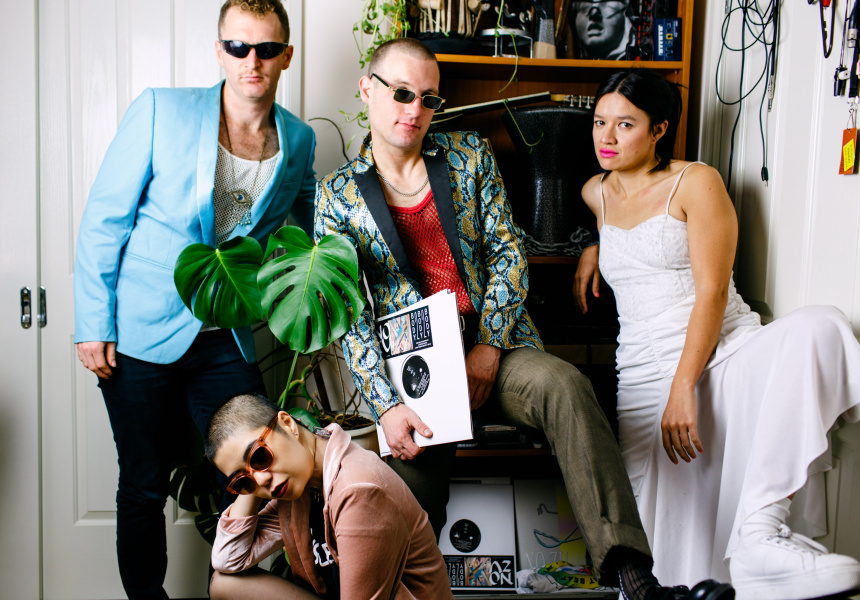 NO ZU’s music can be muscular, joyous and pungent: an eight-membered whirligig of duelling percussion, synths and brass. Within their cathartic mania, a dark absurdity bobs beneath the top layer of mangrove leaves. They are a band that takes on Australia’s rich duality, where a reverence for its mythic history and landscape grates against the nation’s machismo and social hierarchy.

“Australia does see itself as a rough and ready, visceral place and we express that in a lot of ways through our love of sport or physicality,” says founding member Nicolaas Oogjes.

“We make very visceral, occasionally bordering on aggressive or very heavy or strong music, like it’s not subtle and it’s not beautiful but that kind of comes back to the overall idea of Australia as a gaudy place given its history and macho culture,” he explains.

NO ZU began as a scrappy, percussion-heavy four-piece punk band. A bunch of art school kids railing against the rock explosion of the early 2000s. Over 10 years the band has expanded to eight members. On the surface they are one of Australia’s best party bands, but below the infectious rhythms lays a deeply political project questioning Australia’s colonial history and machismo-riddled psyche.

Oogjes acknowledges NO ZU’s influences can be traced all over the globe. The mutant funk of 1980s bands like Liquid Liquid and ESG, who were part of New York’s No Wave scene, are clear influences, as are more widely known acts such as Talking Heads.

Liquid Liquid’s song “Cavern” was first sampled by early hip hop artist Melle Mel and then LL Cool J, both of whom were subsequently referenced by the Yeah Yeah Yeahs in the song “Phenomena”. Just like New York, where that song lived many lives, NO ZU’s music is a melting pot of cultural influences.

You can also hear the sonic footprint of Thatcher’s Britain, when underground Jamaican dub and post-punk gave birth to bands A Certain Ratio, The Specials and Happy Mondays. But Oogjes sees NO ZU as sitting squarely in an Australian music tradition, particularly 1980s pub rock, with the early work of Hunters & Collectors and Nick Cave’s pre-Bad Seeds band The Birthday Party being a key influence.

“It was straight-faced absurdity, really, that fascinated me the most. That kind of humour that I found early on in the Birthday Party,” he says of the Australian post-punk band. “A lot of people wouldn’t even think of them as a humorous band but on their record Prayers on Fire, for example, they reached this level of absurdity that despite singing about ‘Nick the Stripper’ and like, dark deranged things, there’s this knowingness there that it’s over the top.

“I can’t think of anything worse than making completely earnest music.”

He bristles slightly when I fail to see the significance of the lyrics in his band’s music, and question the necessity for any at all.

“They all have to be really meaningful, actually. Like there has to be humour but a lot of those songs are about the fetishisation of colonialism … my obsessions with place in this nation, ideas about gender and sexuality, themes about macho-ism and Australian culture. I know a lot of people think they’re not about anything … I can see that we’re asking for it, you know?”

When the deep bellowing refrain of a song is simply “Ya Ya”, it feels like the incantations are being delivered by deities, laughing as we question the existence of gods. Sometimes that absurdity can feel distancing, which for Oogjes is the opposite of what he is trying to achieve. Finding a deep connection with the audience is intensely important to him and things can start getting out of hand if that connection is slow to appear.

“I start getting overly aggressive and screaming and doing my yelps even more and throwing my drum sticks, throwing my clothes further away. But we do have a real confidence that we can produce the goods, so we dig in. You gotta admit we’re not subtle.”

With his band’s open challenging of gendered power dynamics it’s hard to imagine elements of that macho culture feeling comfortable when confronted by the vision of NO ZU in full swing.

“I always played team sports and stuff like that, and I always felt myself being somebody else,” Oogjes says. “I’ve always seen a lot of people restrict themselves, even in the clothing that they wear in public, to do with the way they might be perceived as not being macho enough. The NO ZU aesthetic is deliberately freeing or liberating … it’s just something about deep down expression.”

Australia’s macho element isn’t only challenged by the male members of the band. NO ZU’s female members Daphne Camf and Becky Freeman are powerful, heroic presences on stage, with dance moves reminiscent of the flexing poses employed by the body builders in the band’s video clips. Converting the frequently predatory male gaze to one of wide-eyed awe and devotion.

Oogjes stresses the intuitive way NO ZU’s music is created and a lack of premeditation. While it’s undoubtedly physical, primal body-music, it’s wildly apparent that he’s an intelligent artist whose obsession with his project requires a deep level of self-reflection and analysis. Perhaps that desire not to be seen as overly inward-looking is an element of Australian masculinity he is still yet to shake. He is after all a man of his country, with all of its complexities and contradictions.

“I know it’s flawed and I know it’s often contradictory at times, I know there’s different things pressing against each other but I think that’s like everybody. If we weren’t all questioning everything, every day then we wouldn’t be moving forward.”

NO ZU celebrate 10 years together with two shows at the Night Cat May 12 and 13. The shows double as a launch party for their new BODY2BODY2BODY 12” out now on Chapter Music.