New York hip-hop icons and a celebrated Caribbean chef will open the world-premiere exhibition of works by Keith Haring and Jean-Michel Basquiat. Photography: Courtesy of the National Gallery of Victoria
1/2 Photography: Courtesy of the National Gallery of Victoria
1/2
by Nick Buckley
Share

The National Gallery of Victoria has just announced the headliners for its annual soiree, the NGV Gala, which will take place on November 30.

After playing a standout set at RNB Fridays Live last year, the iconic Grammy Award-winning rap group Salt-N-Pepa will head back to Melbourne to headline the event. MCs Salt and Pepa and DJ Spinderella (who will not be performing) founded the group in the borough of Queens in New York City in 1985, and they’re a fitting headline act for the opening of the NGV’s summer exhibition, Keith Haring | Jean-Michel Basquiat: Crossing Lines. Both artists were part of the same New York City underground culture that birthed hip-hop art forms such as graffiti, MCing and turntablism.

Salt-N-Pepa have sold more than 15 million albums worldwide, and are responsible for iconic tracks such as Push It, Let’s Talk About Sex and Whatta Man. The NGV Gala show will be their only Australian performance.

Also performing: New York DJ Ge-Ology and Melbourne’s own Yo! Mafia, as well as drag king and queen performers (including Art Simone). The stage will be decked out in ’80s sets that will extend into the nightclub-style Bombay Sapphire Gin Room.

In a nod to New York’s heady mix of cultures, Momofuku Seiōbo chef Paul Carmichael will serve up a Caribbean-inspired menu. Carmichael and Momofuku Seiōbo recently won the 2020 Gourmet Traveller Restaurant and Chef of the Year awards. 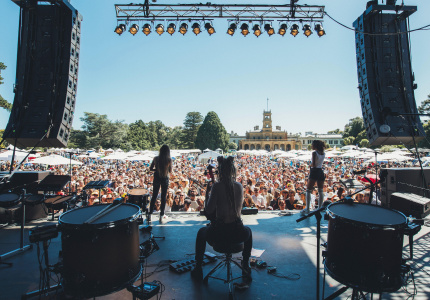 So Frenchy So Chic Returns Just in Time for Summer 2022