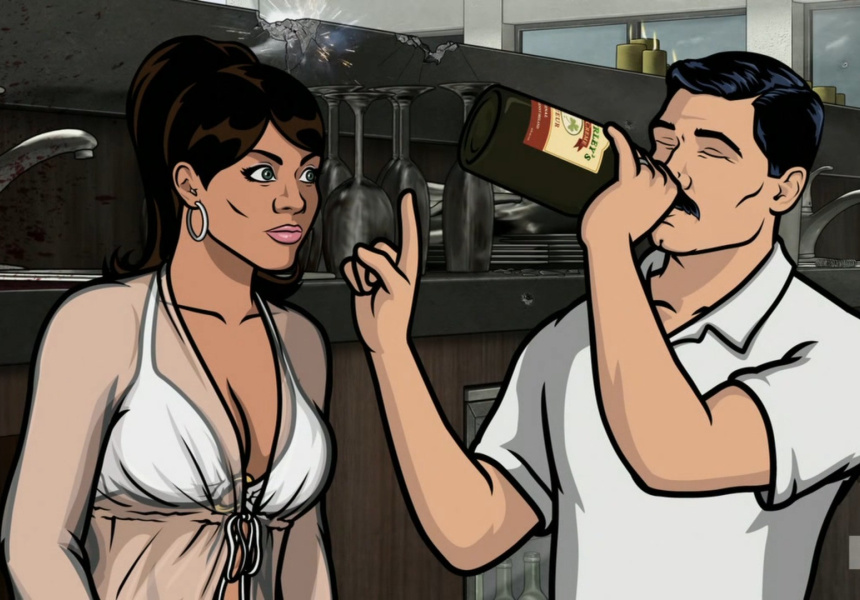 Wine, couch, remote – a trusty trio that will always reassure you of your decision to spend Saturday night in.

So, grab a buddy (or not), pick up some nice booze and stream the night away.

HOUSE OF CARDS
Ruthless politician Francis Underwood knows how to play the game to his advantage. A dark and sophisticated character of multiple personalities, he goes from being soft, warm and generous, to severe, unforgiving and fierce. He is a true creature of his environment.

Much like chardonnay. Also, who can resist making a House of 'Chards' pun?

ORANGE IS THE NEW BLACK
Piper Chapman annoys a lot of people. Kind of like natural wine. It’s a divisive and generally tricky style to pin down. What’s more, orange wine – which is all about plenty of skin contact (the fruit’s, not people’s)– is often wrongly thrown into the natural mix. Much like Piper in OITNB.

In both the wine style and the show – Australia is making an impact. A season-three, episode-nine (30 minutes, 14 seconds), Ruby-Rose kind of impact.

Drink match: Brian ‘Field’, 2015. A field blend of varieties, this has all the right kind of skin contact. And apparently, nude winemaking to boot.

PEAKY BLINDERS
This show is basically Lock, Stock and Two Smoking Barrels in the time of Boardwalk Empire, matched to a Nick Cave soundtrack. Peaky makes me want to drink more whiskey than all the seasons of Mad Men put together.

BROOKYLN NINE-NINE
In the immortal words of my spirit animal, Jake Peralta (played by Andy Samberg), grab your favourite “eight dollarest bottle of wine” and play a little drinking game. For example, take a swig every time Gina makes a cutting remark to … well … anyone. Or when Holt is lame or when Rosa is being a legend. Be careful, or you might not stay upright through a whole episode.

Alternatively, go for a wine that’s firm in body, long in length, has a moist, textured mouthfeel and an explosive but slightly sour finish. Phrasing!

MAKING A MURDERER
Poor Steve Avery. Originally jailed for 20 years for an assault he didn’t commit only to … we’ll let you find out the rest.

When I think about it, the vinous equivalent of Steven Avery is merlot. Much like watching a car crash, or a pissed bloke about to fall over, the variety has a confused kind of charm. It really has copped the bum deal since Sideways and you can’t help but feel a little sorry for it.

But despite all the injustice toward merlot, much like Avery himself, you know you’re never going to be mates and you’re sure as hell aren’t going to invite him over for dinner or introduce him to your girlfriend.

Drink match: Brash Higgins merlot from McLaren Vale. Both wine and winemaker you would actually bring to dinner.