How Does Music Affect Your Dining Experience?

We speak to the experts about perfecting a dinner playlist. Of the top-10 people I want to fight, Ludovic Navarre is at the top of the list. The beige-house producer (otherwise known as St Germain) has committed crimes against earholes since the early 2000s. It’s not that the Frenchman’s music is necessarily bad; what bothers me is how smoothly tooled it is to be easily ignored – and that for almost 10 years his album has been played in every restaurant in the country. Still the bland-wave pioneer pops up at the occasional cafe.

But how important, really, is a decent playlist to a restaurant’s success? David Chang, for instance, once wrote that he only plays the music he wants to hear while eating at a restaurant, not what he thinks the customer wants to hear. It’s not, however, the general approach (hence Tourist).

One-time DJ Dean Cherny is an expert in the matter. His company, storePlay provides tailored playlists for around 3000 retail stores, and a suit of around 40 restaurants, including Grill’d, Dandelion and Mojo by Luke Mangan. He believes that consistency with the brand is of utmost importance when selecting tunes. “Music shouldn’t necessarily be about who the owner is,” says Cherny. “We ask what image they’re trying to put forward, what does their brand represent, and we will do our best to put a playlist together based around that.”

To Cherny, a successful playlist is one that reinforces a venue’s atmosphere without overshadowing the food. “I’m not saying you don’t want to have personality. But it doesn’t need so much personality that it competes with the meal,” he says. “I’ve been to Rockpool a couple of times, and I couldn’t even recall the kind of music it plays. I don’t think Attica relies on its music. They don’t rely on something that’s going to take you away from the food they’re presenting.”

Anthony Huckstep, restaurant critic for The Australian, delicious, and GQ, politely disagrees. “I’m offended by that beige attitude,” he says. “I think the biggest mistake restaurants make is to purchase pre-made tapes that have mood music on them. They should be creating their own playlists based on what they’re trying to present.”

Huckstep believes the playlist is an essential tool for communicating a restaurateur’s ethos – with too many people lacking something to say. “I think a number of restaurateurs are scared to be themselves, and a lot of chefs could be described that way as well,” he says. “A mistake people make is trying to please everyone. If you stick to something, and understand what you want to do, then do it really well, that’s going to be amazing. If you try and please everyone, it’s just going to be average.”

But with the much-discussed “casualisation of dining,” Huckstep is seeing more restaurants willing to make a statement with the stereo. “I think we’ve moved away from the idea that it has to be this boring fucking jazz music in restaurants,” he says. “It shows you don’t need tablecloths, you can have some amazing food and wine and some rock music, and it’ll knock out any other experience.”

Melbourne’s DJ Manchild (of Northside Records and PBS) put this into practice at The Broadsheet Restaurant recently, where he was asked to program an 18-hour playlist that moved from down-tempo mornings to outright party at night. “I’d make links between tracks,” he explains. “I’d play a block of American funk, then I’d go into some African funk, then some African jazz, then American jazz, and go to some Latin, and link them all together.”

He also agrees that having a playlist with a little personality rather than just ambient background noise can alter the eating experience for the better. “It’s not too bad to be noticed,” says Manchild. “Music can enhance any situation. It’s like you’re driving in your car, music can make that a lot more enjoyable.”

What many people overlook, however, is that while most people play music through Spotify, restaurants are obliged to pay royalties for using an artist’s work. “Over the past five years, the cost of using music in a retail environment through Phonographic Performance Company of Australia (PPCA) has gone up quite substantially,” explains Cherny. “If you’re a high-end restaurant, it can cost you about $6000 just to play that music – that’s not even the cost of the music itself.”

While many restaurants ignore their obligations on this front, Cherny reckons it’s a serious business. “A lot of people do ignore it, but APRA and the PPCA, who look after the record companies and the publishers, are pretty diligent in chasing up restaurants who aren’t paying the appropriate public performance fee,” he says. “Once you’re on their list, you’re either paying it, you’re going to court, or you’re finding an alternate music source.”

Huckstep says that whatever they decide to play, restaurateurs should be intimately involved in selecting their venue’s sound. “I don’t want to knock the guys who make playlists and make their business that way, but do they really understand your business?” he says. “You should create an awesome playlist, and you should be heavily involved in it. It’s your business.”

Together with chef Jared Ingersoll, Huckstep recently attempted a phonoculinary experiment called MetalMouth, which matched haut cuisine with heavy metal. “Jared and I really love metal,” he says. “We kind of realised there are a lot of other people who love that music, and also really care about what goes into their mouths.”

And while not to everyone’s taste, as it were, the three-night series was a massive success – so much so the duo is taking MetalMouth on a national tour this year. “People were headbanging to Slayer and enjoying a delicate dashi broth with a kobiya smoked over coals with five different types of seaweed,” he says.

But ultimately Huckstep believes it’s about bringing folks together for a good time, whatever’s on the stereo. “We had a doctor in his sixties sitting next to a uni student who was 19 – and they both like Black Sabbath. They’d never cross paths in normal life, but they did at our dinners,” he says. “It’s actually just about people who have common interests sharing food.” 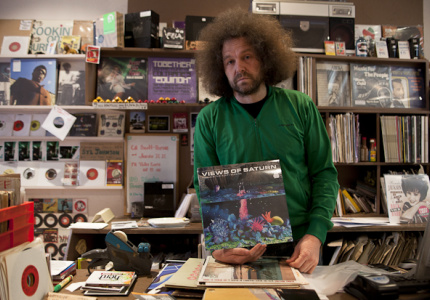