We chat to French singer, songwriter and composer Émilie Simon about her appearance at So Frenchy So Chic, love stories, language barriers and how computers crystallise musical vision. 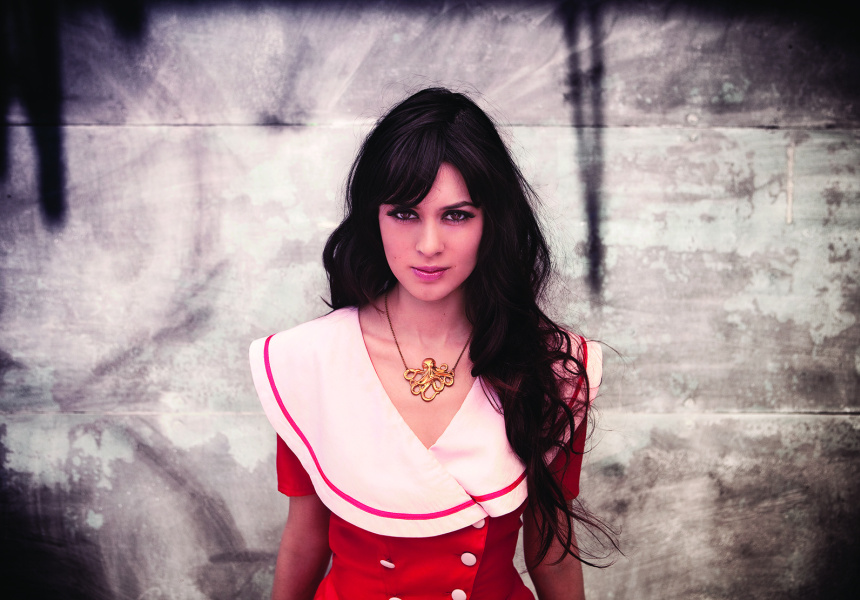 Petite, fine featured with red hair swirling around her face, wearing cowboy-ish boots and cloaked in a lace top, Émilie Simon appears in the Sydney cafe where we’ve agreed to meet. She looks a like an eccentric life-sized doll.

Simon is in Australia on a short showcase tour of Sydney and Melbourne for her new album, Mue. It’s a teaser for her return to Australia for So Frenchy So Chic in January, an event described as a picnic music festival for Francophiles. If you’ve been before, you’ll know it’s more than that; picture mellow sunlight, bare shoulders, barefoot dancing and picnic rugs spread out on the green. Simon, with her French and feminine soundscapes and off-kilter bohemian-ish style, is a perfect fit. Hence the second invitation to join the summer festival for gadabouts.

With previous albums inspired by vegetation, the cold and the atmosphere of New York, Simon doesn’t shy away from thematic and conceptual albums. So what is Mue about, exactly?

“This one is all about a love story happening in Paris. It’s a very romantic album, very feminine too, and the arrangements have lots of strings. They are very deep and warm; like red velvet,” she says.

“Mue” translates roughly as metamorphosis, or a shedding of the skin – something the album evokes in its haunting fuzziness and writhing rhythms. Simon explains it is, “About how, in a love story, your feelings and emotions are on the top of your skin. It’s very sensitive. Sometimes it can hurt a little bit. It scars.

“I like the idea that you carry [your emotions] as a part of you and sometimes it’s a very strong imprint on you. But your skin is always rejuvenating and it’s always shedding. So ... those scars and those emotions can also fade away and leave space for a new beginning. There is this idea of a cycle, as in a love story: you meet somebody in your life, you fall in love and everything is new and everything is beautiful. And then you have all the lies and tears, and you go to the break up song ... and then another beginning.”

Simon writes and sings in a mix of French and English. “I don’t write the same songs in French and in English, and I don’t translate either,” she says. “If a song comes in English, it’s meant to be in English. Same thing for French. The language can be an inspiration for the writing. Of course, I like people to understand what I’m saying and appreciate what I’m writing, but it doesn’t bother me at all that people don’t understand. I grew up listening to music where I had no idea what it meant. I listened to American songwriters, British songwriters, bossa nova; I had no idea but it still made me so happy and I was still able to hear the beauty in it.”

With her electronic melodies merged with strings and sweeping vocals, it’s perhaps unsurprising that where most musicians write songs with their voice and a guitar or a piano, Simon writes with a less romantic instrument. “I started with the computer, because I wanted to create the textures and sounds I had in mind,” she says. “And the sound I had in mind was not a guitar, and was not a piano and it was based on beats and drums and a strange processing that I could only achieve using a computer.”

“The fact that I started with a computer gave me a precise idea of what I wanted and didn’t want ... without having anybody interfering and saying, ‘What about ... ?’ or, ‘Oh no, this song was better’, you know?” She asks the question genuinely rather than as a spoken reflex. I nod as though my sense of musicality goes beyond slurred karaoke performances. “Working with others is something that can be nice, but it’s also good to try to do it by yourself and see what you can come up with; to have a unique vision.”

“There is not a bad song out there, it’s just the perception of it. What you think is bad or good, another person will think the opposite. So what is interesting as an artist is to develop your vision and sense, to dig and to go the furthest you can.”

So Frenchy So Chic in the Park arrives in  Melbourne on January 11, 2015 at Werribee Mansion.