Playing with fossils would be many kids’ dream job – and Tim Ziegler doesn’t take it for granted. In partnership with Museums Victoria, he unpacks the basics of his unique, dynamic work. 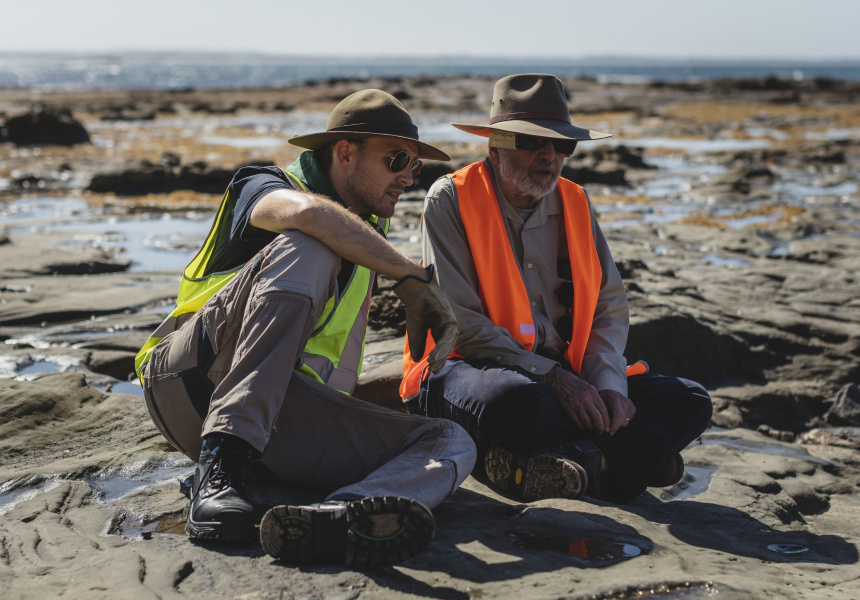 Tim Ziegler knows a lot about really old, dead things – specifically, fossil bones, teeth, and footprints collated in Victoria. As the vertebrate palaeontology collection manager at Melbourne Museum, he says they reveal what’s beyond “the onion-skin layer [of] the modern landscape”, helping us better understand the state’s natural history.

“We could never understand today’s world without studying what came before,” he says.

You may not be able to visit the Melbourne Museum in person right now, but you can visit it digitally thanks to people like Ziegler, who are working hard behind the scenes.

From holding in his hand a fossil unearthed after 100 million years, to studying fossilised shark teeth discovered near Torquay, and fielding citizen palaeontology in a pub, Ziegler’s job is rich and varied. So we asked him about it.

How would you explain your job?
Melbourne Museum houses at least 200,000 fossilised bones, teeth, and footprints. My job is to keep those fossils safe [and] maintain the scientific knowledge that comes along with them.

For each new project, we’ll delve into a different corner of the collection. Some days it’s pocket-sized ancient whales, or the whole history of dinosaur-aged Victoria. Some days it’s giant kangaroos, armoured fish, or even plankton and pollen grains. I also travel Victoria for fieldwork to discover, collect, and study its fossil heritage.

What drew you to this area of expertise?
I was inspired to study natural science by the depth and complexity of natural places. What looks simple or unchanging, is invariably exciting and full of action – if you know how to look for it. A forest is a product of billions of organisms, from bacteria up to gigantic mountain ash, all of which interact at scales from milliseconds to millennia

And that’s just what’s happening today. I learned that in Victoria’s rocks alone, you can see deep oceans, polar Cretaceous forests, shark-filled bays, and volcanic plains. And in fossils, you find the life that filled those places. It still bowls me over.

What are you working on right now?
I am studying an assemblage of fossil sharks’ teeth that are about 24 million years old, from the Surf Coast near Torquay. There was once a gigantic carcass settled at the bottom of [this] shallow bay. We estimate it was nearly eight metres – as long as four queen beds laid end to end.

What’s the most bizarre thing you’ve encountered on the job?
Being handed a Ventti [cigarette] filter packet full of fossil teeth in a pub bistro by someone who wouldn’t take no for an answer. It was all a bit Watergate conspiracy, especially when they wanted to stay anonymous. But they told us exactly where the teeth came from, and reckoned they’d be better kept in a museum than at home. Palaeontology takes all kinds of people!

And the most rewarding thing about the job?
When you turn a stone or crack a rock to find a fossil, you are the first person to see it, ever. It might be 100 million years since it last saw sunlight, and there it is in your hand.

Read about how the discovery of a rare fossil tooth reveals an extinct group of seals from Australia’s deep past and go on a virtual tour of the Dinosaur Walk, among other highlights from Melbourne Museum at Home.