Late to the Party: Six of Melbourne’s Best Gigs in May 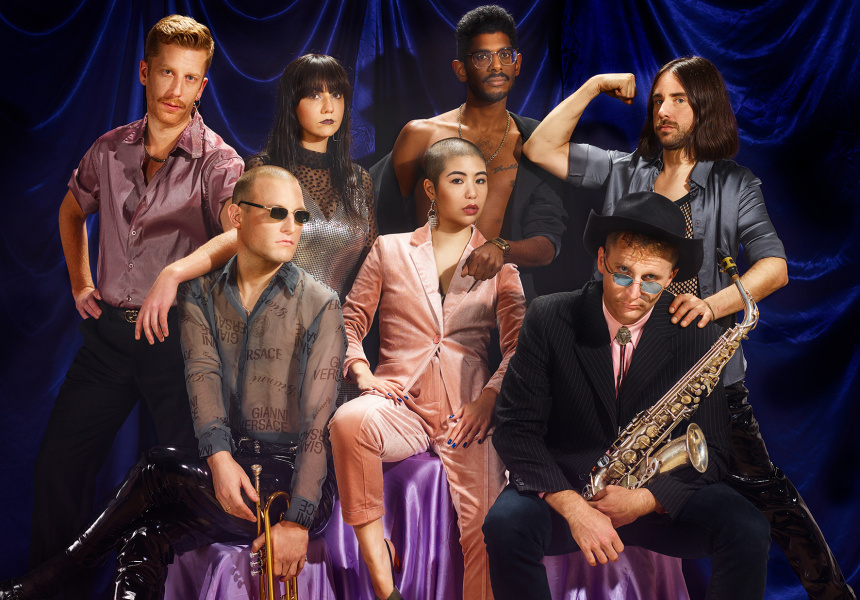 From the son of a disco accordionist to a triumphant tour from one of pop music’s most in-demand enigmas, musical adventures are many in May.

When your schedule is filled with A-list collaborations with Kanye, Drake, Solange and Frank Ocean, it’s hard to find time to work on your own material. Anticipation built steadily for Sampha’s own debut, after first gaining attention with co-productions on SBTRKT’s self-titled album six years ago.

Becoming an enigma before you’ve released your own album can be a crippling burden for some artists, but his debut, Process, dropped last year and managed to transcend expectations. It’s an understated set of songs combining light nods to the UK Bass production of his homeland with a heavy dose of American ’90s R’n’B. Held together by Sampha’s own soaring vocals, the record can be both devastating and hopeful.

From a scrappy, percussion-heavy four piece, NO ZU has grown to become an eight-strong whirlwind of bongos, brass, rubbery basslines and heroic female chanting.

Riffing on the blueprint of early 1980s New York acts, Liquid Liquid and ESG, the band’s humid Afterlife was one of 2016’s best albums. This show will double as a launch party for the 12” remix EP of that album, as well as the band’s 10-year anniversary show.

NO ZU play the Night Cat, Friday May 12 and Saturday May 13. Tickets here

Lisa Hannigan began her career in Damien Rice’s band, though her music is far more complex than her fellow countryman’s guitar ditties.

Songs with a surface delicacy wrought from simple guitar and piano lines give way to something lyrically darker, backed by melancholic strings. Her Celtic heritage is displayed subtly but unashamedly in her debut album Sea Sew, which was nominated for a Mercury Prize.

In her latest album At Swim (produced by The National’s Aaron Dessner), Hannigan harmonises with herself throughout – double-tracked vocals and crystal-clear pitch sit high in the mix. Hannigan is proof you don’t always need the operatic lungs of Adele to rise above the tide.

It will be truly lovely to hear such a gifted singer in a venue as intimate as the Thornbury Theatre.

There’s no need for a disco ball when the bright lights sparkle from Donny Benet’s perfectly oiled head.

Broadway Sounds, and its extended afro-beat workouts, will provide support on the night. Imagine a party hosted by William Onyeabor’s hyperactive nephews. This is easily the best bang-for-your-buck party of the month.

Behind Mulatu Astatke, Mahmoud Ahmed is the second Godfather of Ethio-Jazz, a genre formed in the 1970s when traditional Ethiopian instrumentation fused with western jazz and funk.

In 1962, Ahmed was working as a handyman at the Arizona Club in Addis Ababa, Ethiopia. The club was the favourite haunt of Emperor Haile Selassie I's Imperial Body Guard Band. When the band’s singer didn’t show one night, Ahmed put up his hand and subsequently became a regular member.

When Selassie was overthrown in a military coup, a significant Ethiopian diaspora developed around the world. Ahmed became one of the first musicians to tour abroad and became popular in refugee communities around the world, before connecting with western audiences in the 1990s. The guy is 75, so catch him while you can.

This seminal Japanese noise/metal act’s catalogue can veer wildly from psych rock to ambient drone, doom to grunge, there’s even a weird album verging on J-pop in there. It’s also released 23 studio albums since 1996 along with 13 collaborative albums.

Largely unknown in their home country, Boris has developed a cult following abroad through a relentless touring schedule, collecting fans such as film director Jim Jarmusch (who featured the act on his Limits of Control soundtrack) and fellow drone titans Sunn O))), with whom the band has also collaborated.

Pink, possibly Boris’s most well-known record, is just over ten years old, and the band will be playing it in full. It will be very effing loud.