Late to the Party: Melbourne’s Best Gigs in March 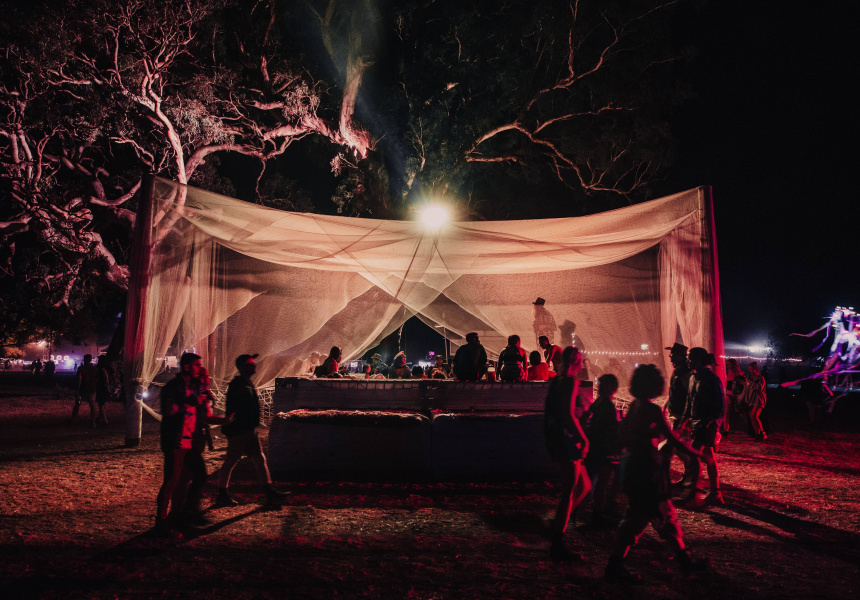 Photography: Courtesy of the artist
1/14
by Nick Buckley
Share

This March you’ll find a bunch of Golden Plains sideshows in Melbourne, including one from a group of vitriolic electro-punks and another from an artist offering intellectual, deeply emotional dance-floor magic. There’s also some absurdist, avant-garde, apocalypse-funk from across the pond, and a special treat for fans of Hall & Oates, New Order, Cyndi Lauper, Bruce Springsteen and early hip-hop.

Vanessa Worm
The first time I saw New Zealand electronic musician Vanessa Worm play was at a Brunswick warehouse party, boxed in by a concrete roof and pillars. An array of electronic gear was spread out on a low table, from which she’d trigger loops, raw drum machine breaks and distorted synth wiggles. And then the yelping started. Stalking back and forth between the crowd and her equipment, Worm uttered guttural chants, dadaist incantations and nonsensical howls.

The performance was hilarious, menacing and fearless. When she bent over her gear in a kind of mutant twerk all I could think of was Jim Carrey talking with his arse in Ace Ventura: Pet Detective. Worm has a manic stage persona and her delirious, absurdist glee is captivating. She closed Friday night at Meredith last year – in a slot usually designed to send everyone to bed, but that instead left the crowd energised – silhouetted against a backdrop of lightning bolts like a kind of shadowy party wraith.

This show at the Tote will be the debut performance of Worm’s new live set, so get ready to be the guinea pig for some untested weirdness. If you need more convincing, listen to her track I Did A Lava Dance for a taste of her bonkers apocalypse-funk.

DJ Sprinkles
A DJ Sprinkles set is as much about the gaps between the samples as the beats that move the floor. Their sets are a balance of euphoria and transcendence, music theory and historical interrogation.

Sprinkles is just one of the many aliases of Terre Thaemlitz, a multi-disciplinary artist who uses music as a tool to dissect queer histories, capitalist systems and the distinction – or the lack thereof – between art and commerce. As a transgender activist and avant-garde sound-collagist, Thaemlitz has produced tracks such as a 29-hour piano solo (the maximum size of an MP3 file), as well as more accessible, dance-floor-appropriate remixes and sample-based tracks through the DJ Sprinkles alias.

But those crowd-pleasers aren’t necessarily devoid of meaning. In a profile in the New Yorker, Joshua Rothman points to the 2013 tune Oh Yoko – Seashore (Sprinkles’ Ambient Ballroom), in which Sprinkles takes a homophobic Gil Scott-Heron sample and juxtaposes it against a conversation between two gay characters on a ’90s cop show, where one is consoling the other after the murder of their partner. This is dance music of rare heart and intellect.

DJ Sprinkles is playing at Golden Plains, which is sold out, but you can catch the artist’s four-hour sideshow set at Radar on March 6. Tickets here.

Sleaford Mods
Do you ever feel like an increasingly convoluted world is robbing you of your humanity? That the humdrum nine-to-five life is a ruthless overlord sucking away your vitality? Does neoliberalism make you want to rob a Starbucks? If so, Sleaford Mods frontman Jason Williamson is the poet and preacher for you. Williamson is a modern-day Rousseau – only raging against conservative Britain rather than the French monarchy – sing-rapping over Andrew Fearn’s degraded electro-post-punk production.

Take the band’s 2016 single T.C.R., in which Williamson compares monotony and consumerism with a slot-car racing set. On his way around the track he communicates the anxieties of a new father and ageing punk rocker, and rails against uncomfortable couches, pretentious waiters and young people dressing like Elvis. The song is self-deprecating, witty, anxiety-riddled and thoroughly pissed off at the state of the world. It’s textbook Sleaford Mods.

On stage, Fearn has been known to show up with a CD player, hit play and drink a can of lager while Williamson spits his vitriolic sermons, delivering a spray that hits the back row of the show. They’re playing Golden Plains, but it’s hard to imagine how Williamson will respond to the colourful outfits and fairy-light-coated doof sticks. It’s under the low roof of the Croxton Bandroom that you really want to see the Mods.

Sleaford Mods are playing at Golden Plains, which is sold out, as well as the Croxton Bandroom on March 5 (sold out) and 11. Tickets here.

Disco A-Go-Go Featuring Evelyn “Champagne” King and Mondo Freaks
Last year’s Duke Street Block Party in Abbotsford had the makings of a killer day party, but it had some teething problems, too. Big crowds forced security guards to block the entrance to the main stage for the DJ set by headliner Floating Points, and this combined with sweltering weather saw many punters leave before the closing act, the iconic disco and boogie artist Evelyn “Champagne” King, backed by Mondo Freaks (a group of gun Melbourne session musicians).

The combo of legacy act and local players is a winning formula for promoter Crown Ruler, who pulled a similar trick pairing Harvey Sutherland with cult boogie musician Leroy Burgess at Freedom Time in 2018. The demand for acts such as King and Burgess is emblematic of the growing popularity of classic disco, and it was genuinely touching to see King relish her first Australian performance so far into her career at Duke Street. Despite needing to pull up a stool at a few points during her set, she was still a great presence, and with Mondo Freaks’ working jam Shame and King’s earworm Love Come Down, it was hard not party. Expect the party to multiply when King and band play an extended set in the round at The Night Cat.

Evelyn “Champagne” King and Mondo Freaks are playing at Golden Plains, which is sold out, as well as The Night Cat on March 10 and 11. Buy tickets for the March 10 show here and the March 11 show here. (Ticketholders for the cancelled February 29 and March 4 Night Cat shows can swap their tickets for the new dates or get a refund here.)

Arthur Baker
When you look behind the scenes of the music industry, patterns emerge. There are the bands that write the songs, but in the background are the producers responsible for honing their sounds, developing new production techniques and adding layers of polish that make a great song unforgettable.

Such is the case with Arthur Baker. Boston-born Baker began DJing in the early days of disco, playing crowd-pleasing soul music. He wrote an album for legendary disco producer Tom Moulton. But it was in the ’80s, in the early days of hip-hop, that Baker made his mark. Working at Tommy Boy Records, he produced Afrika Bambaataa and Soulsonic Force’s iconic track Planet Rock. An ode to Baker and Bambaataa’s love for the German band Kraftwerk (the track uses elements of Trans Europe Express and Numbers), Planet Rock almost single-handedly created the electro sub-genre of hip-hop, which moved away from soul and disco samples towards icier electronic sounds.

Baker’s influence doesn’t stop there. As a producer he pushed the art of the remix into the mainstream, stretching out pop singles to suit the nightclub as B sides for 12-inch vinyl releases. Take a listen to his sensational remixes on Bruce Springsteen’s Born in the USA singles, particularly the dub mix for Dancing in the Dark.

As well as Bruce Springsteen, Baker has worked on remixes for iconic acts such as Cyndi Lauper (Girls Just Want to Have Fun); Hall & Oates (Out Of Touch, Method of Modern Love, Possession Obsession, Dance On Your Knees); and the Pet Shop Boys (Suburbia). He even co-wrote Confusion and Thieves Like Us for New Order. Baker has had a remarkable influence on hip-hop, pop music and DJ culture – head to Colour and pay your dues to the legend.

American DJ Maceo Plex is headlining and it's his first Australian set in seven years. The DJ cancelled his appearance at Pitch 2018 leaving many festivalgoers disappointed. On top of extensive single releases and remix work, Maceo Plex released his latest album, Mutant Series, in March 2019.

In response to the bushfire crisis, $5 from each ticket sold will be donated to the Country Fire Authority to provide much-needed support. It’s a significant commitment from the festival, which hosted 7000 attendees in 2019.

Pitch Music and Arts Festival is from March 6 to March 10 at Moyston-Dunkeld Road, Moyston. Tickets here.