Produced by Broadsheet in
partnership with Zoos Victoria.

The Laser Artist “Speaking to Elephants” at Melbourne Zoo

Robin Fox’s audio-visual laser installations saturate the senses while pushing the boundaries of light and sound. In partnership with Melbourne Zoo, we speak to him about designing work for the zoo’s night-time Neon Playground experience. 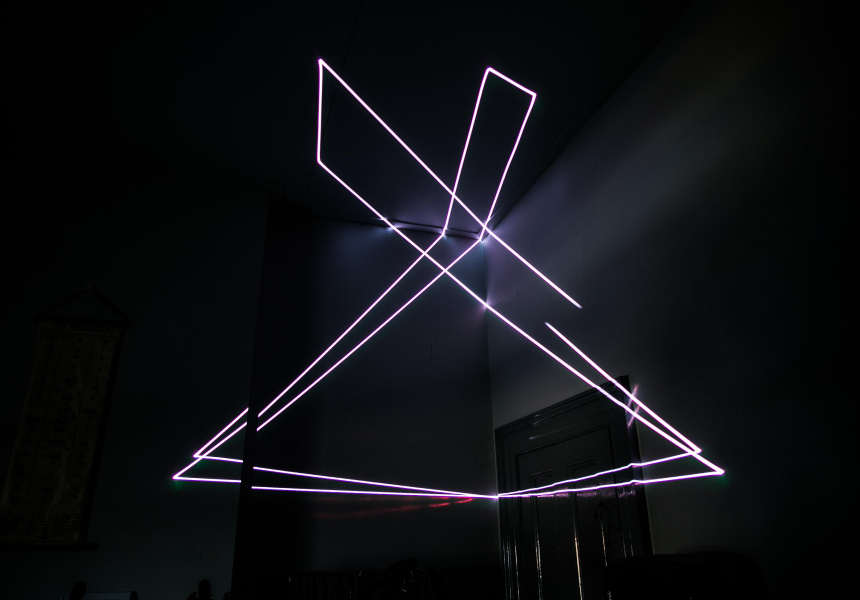 With the Zoo Twilights series now a beloved part of the Melbourne cultural calendar, Melbourne Zoo is adding another after-hours event to its schedule.

Running for two weeks in mid-April, Neon Playground is a light and laser installation event that will collect a diverse cross-section of local artists to bring the leafy precinct to life after dark. While some of the works on display will call attention to the zoo’s inhabitants, one installation aims to disappear into it.

“It’s quite electronic and inorganic,” he says. “But I’m a big fan of cognitive dissonance, so putting something inorganic in the middle of this organic place is probably not such a bad thing. It’s completely counterintuitive – you’re not used to seeing light behave that way.”

Fox’s piece expands upon an earlier project, White Beam, which he conceived for Hobart’s first Dark Mofo in 2013. With twice the capacity of that artwork, Double Beam will join works by local artists Kit Webster,Carla O’Brien and others at the event.

Running from 5.30pm to 9.30pm daily, Neon Playground will also feature attractions such as a neon maze inspired by the black-and-yellow colouring of Australia’s endangered Southern Corroboree Frog, and an “Awareness Alley”, erected along the zoo’s Main Drive to help draw attention to those species fighting extinction. There will also be food and drink options.

Fox’s installation doesn’t specifically tap into the natural world, but he did once have a serious epiphany while scanning a common maidenhair fern with a flat laser beam.

“Just by getting a simple plane of light and scanning it across something very complicated, [I discovered] you ended up articulating all the complexity,” he says. He’ll recreate the effect with trees at the Zoo. “[The beams] will activate the whole area,” he says. “The environment becomes the canvas.”

The zoo has, of course, planned the installation so it won’t interfere with its animal residents. The lasers and lights are situated far from the actual wildlife, and Fox has also received approval for the low frequencies he plans to play. “I’m not trying to create a super-loud rock concert,” he says. “I’m creating an installation, so the level is much more negotiable.”

Artists are often asked to outline the exact meaning of their work. Fox prefers to let his immersive sensory experiences stand on their own. “My work doesn’t mean anything,” he says. “It’s more about the experience of phenomena. [Likewise] the zoo is an experience, and what I’m creating in that entranceway is kind of an otherworldly experience that makes the zoo hyper-amplified. This is more about bringing you into that space and making it something extra.”

This extends beyond lasers to the sonic aspects of his piece. “The sound you hear is also activating the laser projectors,” he says. “It’s like a raw electrical signal, and a lot of the stuff that works really well is very low frequency. So it’s like a sub-harmonic phasing sound. When you hear it, you’re also looking at it. You’re looking at how the light bends in space and listening to how the sound bends in space, for want of a better term.”

Fox has done installations for festivals around the world, as well as touring individual works. He once conceived an interactive colour-and-noise organ for Sugar Mountain, and he often scores contemporary dance pieces.

His latest score is for Stephanie Lake’s multidisciplinary work Skeleton Tree at Malthouse Theatre, and he’ll also have a hand in the light-and-sound series Spectral at Arts House in April. That includes his performance work Single Origin plus a new installation called Quadra, which he’s then taking immediately to Moscow and Spain. He also finds time to run the Melbourne electronic studio and instrument collection MESS, which he founded.

“There’s always a shit-tonne going on,” he says. As for the challenges of Double Beam’s very high-profile run at the zoo, he mentions having to notify the civil aviation authority so that pilots don’t think “aliens are fucking with them”. Then there are the longer wavelengths of the low frequencies he’s planning to use, which means the sounds travel much further than frequencies in the higher range.

“The people at the zoo were telling me that elephants actually communicate with sub-harmonic frequencies,” he says with a laugh. “So perhaps I’ll be talking to the elephants.”

This article is produced by Broadsheet in partnership with Zoos Victoria.

Produced by Broadsheet in
partnership with Zoos Victoria. Learn more about partner content on Broadsheet.