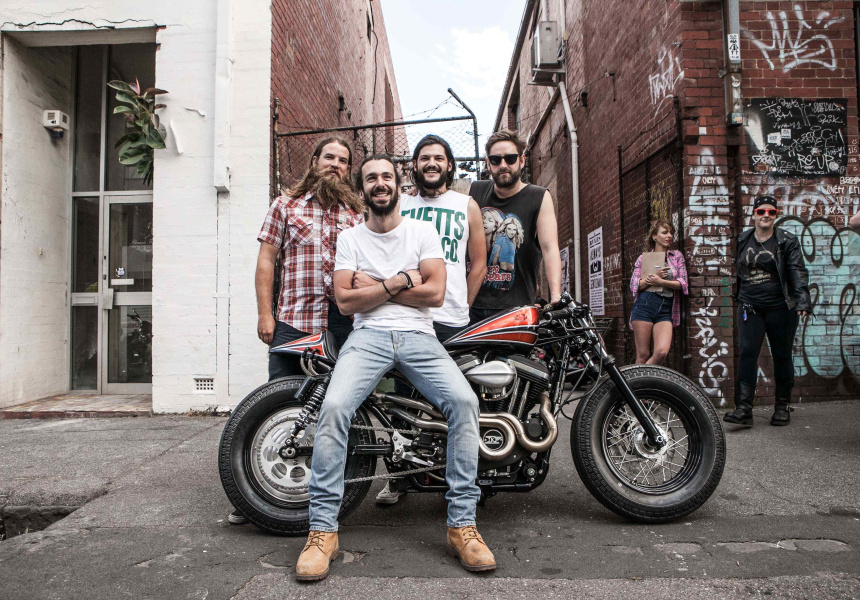 “I’m trying to get to Albert Park,” says Laska, “It feels like being in a video game.”

Laska and his band mates are gearing up to headline Melbourne Music Week’s Live Music Safari tonight, a free event for the public that highlights 14 of Melbourne’s iconic and best-loved venues by packing them with local artists. The Melbourne rock outfit will launch the night on the Queen Victoria Market stage, a coup for the band but by no means its first big gig.

“Hi-Fi was one of our best Melbourne gigs … we bought so many of these 24-inch pizzas beforehand that at least four or five hadn’t been touched, so we yelled, ‘who’s hungry?’ and threw them to the crowd. It was like feeding Christians to the lions, it was furious.”

Kingswood has been gaining momentum since the release of its debut album, Microscopic Wars this year. It has earned the band a nomination for Best Rock Album at the 2014 ARIA Awards alongside Dan Sultan and, curiously, Angus & Julia Stone.

“Kingswood” may sound innocuous enough, but the story behind the band’s name is more interesting than you may expect.

“Mango [bassist Jeremy Hunter] studied environmental science, and one time he thought he’d discovered a new comet. He rang in to give it the name Kingswood but it had already been discovered.”

“It was dark day for Mango. Imagine thinking you’ve discovered something amazing and you haven’t. So we named the band Kingswood to remind him of it.”

Another highlight for the band has been playing with Aerosmith during its Australian tour, although performing at Rod Laver Arena was a strange experience, says Laska.

“We played to over 5000 people, but in Rod Laver, it’s like playing to nobody. You can’t hear anyone ‘cause they’re so far away. You can’t see anyone. You don’t know if people are digging what you’re doing.”

“But then Steve Tyler comes into your dressing room and he’s exactly how you think he’d be, wearing a leopard-print dressing gown with jeans and runners and holding an iPad, and he’s like, ‘You wanna see photos of me from last night?’”

Apparently the best advice the guys got from Tyler was to keep their hair long. But not dirty, Laska emphasises.

Kingswood launches the Live Music Safari at its sold-out show at QVM tonight as part of Melbourne Music Week. For information on the other 14 venues featuring free music tonight, go to the MMW website.