The Keys to the City

Melbourne Town Hall’s awe-inspiring grand organ is the largest of its kind in the Southern Hemisphere and belts out everything from classical to techno. And as our arts editor Will Cox found out, it’s surprisingly fun to play. 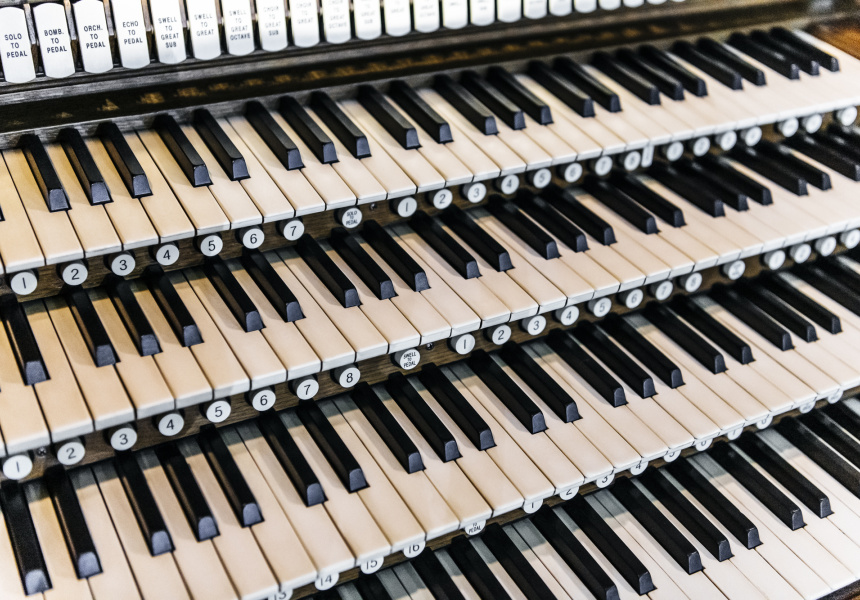 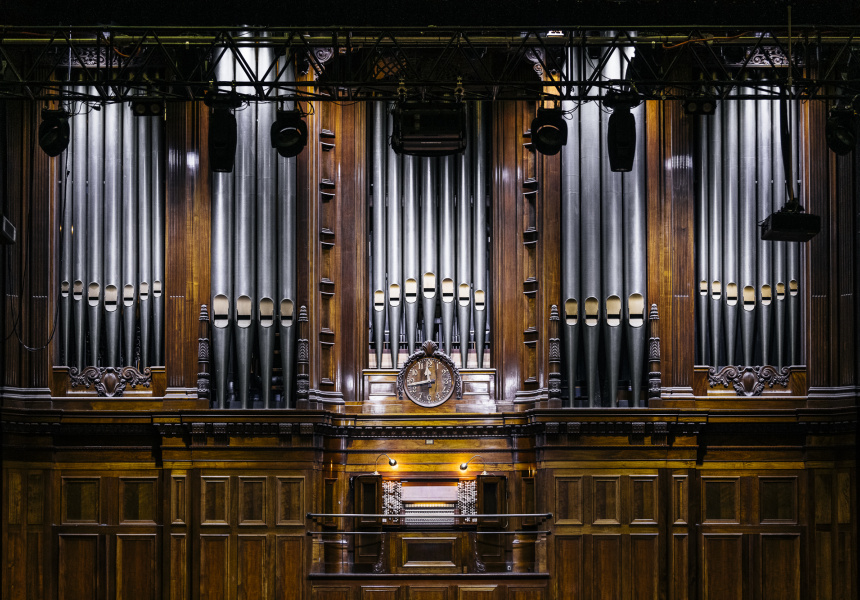 Miles Brown, the City of Melbourne’s curator of musical instruments, flicks the switch that turns on Melbourne Town Hall’s grand organ. It’ll take a minute. Air begins to pump from the roof, hissing through 9592 pipes, drums and bells. The two of us are perched on a narrow balcony, a storey off the ground, with our backs to the hall.

This is the largest organ of its type in the Southern Hemisphere, and it’s all controlled from here: four keyboards, dozens of foot pedals and countless stops marked with different sounds Once it’s warmed up, I lay my fingers on the second keyboard and, following the likes of Philip Glass, Brian Jonestown Massacre, You Am I, Goblin and Tangerine Dream, ease out a few chords. A deep gothic bellow fills the hall, reverberating around us.

We slip through a little side door and Brown takes me inside the instrument. Behind the Queensland maple facade, there are three storeys of inner workings, accessible by a rabbit warren of doors, metal gantries and ladders. We wander among the huge pipes of metal and wood, which are up to 20 metres high. There’s a shower and toilet in here, plus a small museum, with displays, historical pictures and best of all, a scale model of the whole instrument, with an Action Man-sized figurine sitting at the organ.

But it’s bigger than just these three storeys. The acoustics of the room are a key part of the grand organ.

The grand organ was finished in 1929, after the 1872 original caught fire, taking most of the town hall with it. Brown says the current model, refurbished in 2001 at a cost of $4.5 million, is one of the finest instruments in the world. It’s more modern than it looks. It’s fully controllable via MIDI, the industry-wide standard for interfacing computers and analogue instruments. You can play it via a keyboard down on the stage, or via iPhone app. And it’s kept in perfect working order.

“For an organ this size, that’s rare,” Brown says. “We’re lucky to have the resources to keep it fully functional.” It’s tuned three times a year, a process that takes several weeks.

Despite the electronic upgrade, the sounds are satisfyingly real. When I pull the stop marked “Glockenspiel” and tinkle a few keys, a robotic arm somewhere behind the scenes hits a real glockenspiel. When I pull “Bass Drum”, I can just see, through a gap in the pipes to our right, a bass drum being kicked. Tremolo (a wavering note) is achieved by remotely opening and closing huge shutters up to my left. It’s an ingeniously manual, intricate machine.

Brown first played the grand organ in 2012, on his birthday. Then-curator Ariel Valent commissioned his band the Night Terrors to compose a new piece on it. Brown fell in love instantly, and spent many late-night sessions hunched over the organ. When Valent stood down, he recommended Brown as his replacement.

Now, Brown’s job is to expand the breadth of the music being made for the organ. “It has a rich tradition of classical music,” he says, “but it’s here in our town hall, so it should be accessible for everyone. We want to represent as much of the city as we can.”

He’s currently planning an event that opens the floor to techno producers. Though it’s vastly complex, people from different disciplines and genres come up with remarkable results. Last year I saw a memorable performance by singer Sarah Mary Chadwick, whose usual stark solo keyboard sound translated beautifully. She seemed in full control after just a few weeks of playing.

“It’s got a lot to do with confidence,” says Brown. “It’s funny when people have their first play with it and they think it looks a bit staid and churchy. But when they get into it, it’s amazing.”