Round 2: In The Ring With Banoffee

With her second EP due for release in October, Banoffee talks getting past fear and why it’s okay to be selfish. 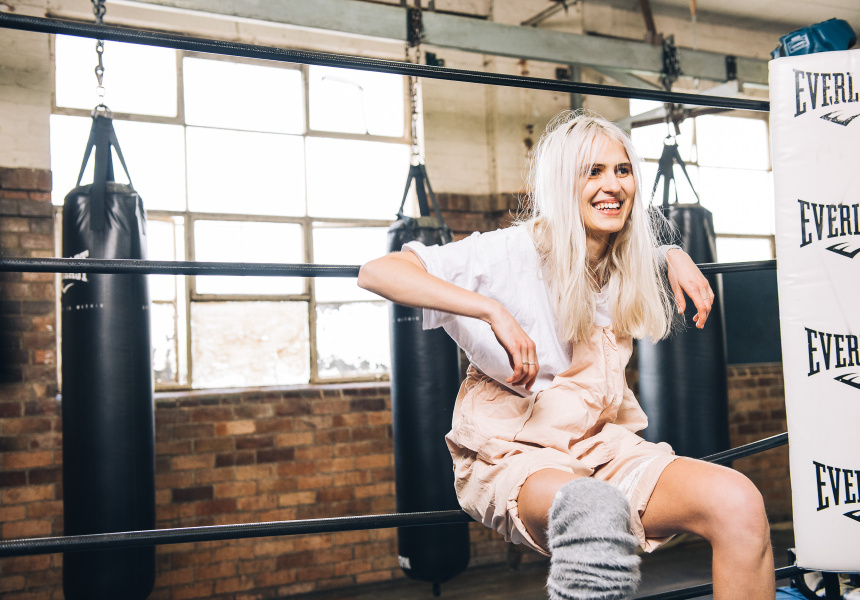 Banoffee, aka Martha Brown, has just been locked in for the next Laneway Festival. She’s psyched to see Shamir, who she has a “huge music crush” on. She’d love to collaborate with (or even just hit on) him but thinks she’s “too daggy”.

It’s not a word anyone else would use to describe her. The Pageant powersuit-wearing Brown transmits R’n’B pop via synths and glittery warbles, and is the coolest lady in the room by a long stretch.

Her second EP, Do I Make You Nervous?, comes out on October 2 (though you can stream it now on Spotify). For it she worked with local producers, including Martin King (Oscar + Martin, The Harpoons), GXNXVS and Oscar Key Sung.

She might be killing it (in both music and fashion: a collaboration with Pageant is due out this summer), but Brown says every track, “Is as scary as the next.” To get past paralysing fear to create music, she focuses on the reward at the end.

“If you're scared of it, it's probably worth doing,” she says. “When you release something as an unknown, there's no expectation on you, but to do it again … I didn’t think [it] would happen. I had a lot of fear about how to live up to the expectations of people who supported me with the first EP. I felt I really owed people something for that, and it took me a long time to just shake that off and say, ‘I’ve got to do this for me’.

Brown’s first single, Ninja, dealt with this kind of fear, and became her personal Eye of the Tiger. “It was telling fear to fuck off, and I try to still do that.” Setting the clip in a boxing ring made sense: an environment where she felt “the strongest I’d ever felt as a woman”.

The track has been an occasional kryptonite when performing, though. “I realise I'm getting too close to home; I feel too exposed and too sensitive," she says.

Drawing the boundary around how much she’s willing to share is a lesson she’s still learning. “I’ve sung Ninja on stage before and burst into tears and then been like, ‘This is ridiculous. Why did you write this?’ It’s a learning process. But I like to push it and show myself it’s okay to show fault and nervousness and silliness and everything.”

Other songs catch her off guard as well. "I've written songs for my best friend … if she looks at me while I'm singing certain words, she'll cry, I'll cry, and it'll all be over. That gets in the way a little bit."

And then there was the moment she realised her songs aren’t exactly G-rated. “I played a kids show and realised that every song on my EP except one had the word ‘fuck’ in it. And all my relatives came.”

As a kid herself, Brown made up dance routines and was part of a Spice Girls cover band. She took dance classes (jazz ballet, contemporary and Mangala-style creative dance), but didn’t ever feel she “got it”. “But I enjoyed it so much, I kept doing it." Movement and dance inform all her music.

The same goes for images. “For me, it would not ever make sense to have a song without a visual,” she says. The Banoffee project was never a straight audio concept.

“Hopefully I will always have the privilege and the luxury of putting visuals with music,” she adds. “That’s probably the reason I’ve done such short releases, so I can afford to do clips with all of them. It invites people to get to know [you] a bit more.

“I want to invite people into the project instead of it being something disconnected.

“There is nothing altruistic about me making music. I do it because I have a lot of fun with it, and I enjoy it and I get almost like a therapy out of it,” she says. “But I realised a little while ago that I'm always like, ‘Oh, I'm being so selfish and so self-absorbed doing this.' But, the things you do for yourself are really vital.”

Banoffee’s new EP Do I Make You Nervous? is out on October 2 via Dot Dash. She plays Howler on October 30 and St Jerome’s Laneway Festival in February 2016 – and is doing at DJ set at NGV Friday Nights on October 9.

(Photos for this interview were shot at Leo Berry's Boxing Gym in Richmond.)