Inside the Sprawling Still in My Mind: Gurindji Location, Experience and Visuality Exhibition at Museums Victoria

It brings together vital archival material and thought-provoking newly commissioned works. In partnership with Museums Victoria, we talk to curator Doctor Brenda L. Croft about the art inspired by a significant moment in Australian history. 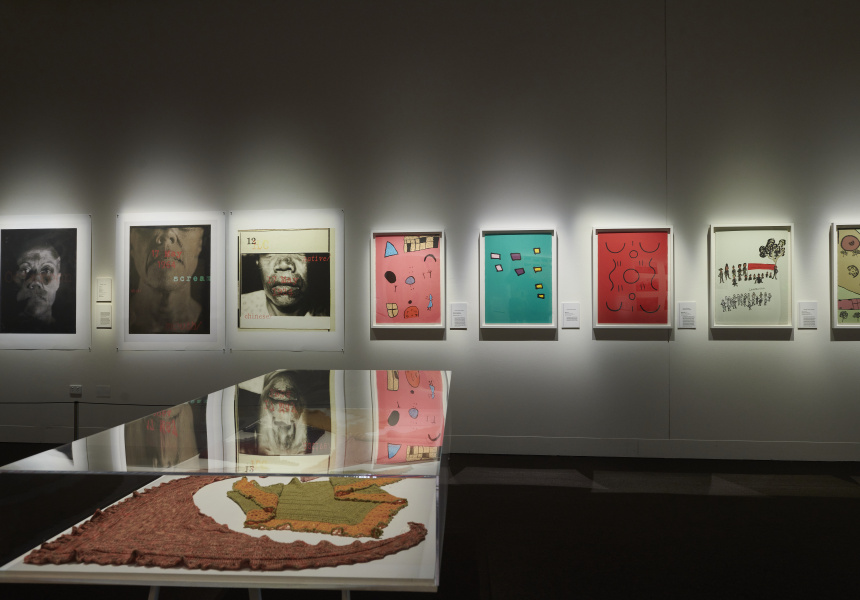 “Most people when they hear of the Gurindji community, they know a little bit about the Gurindji walk-off from Wave Hill station,” says Dr Brenda L. Croft.

Two hundred plus Gurindji stockmen, domestic workers and their families began strike action at Northern Territory’s Wave Hill station in August of 1966. The walk-off would lead to a near nine-year dispute with the station owners and “the birth of the national land rights movement”, Croft says. “That’s reflected in the song by Kev Carmody and Paul Kelly – From Little Things Big Things Grow. But Gurindji community history is far broader than that really important moment.”

It’s this community history that Croft is exploring in the exhibition Still in My Mind: Gurindji Location, Experience and Visuality, which is currently showing at Museums Victoria’s Bunjilaka Aboriginal Cultural Centre. The Wave Hill walk-off serves as a cornerstone for the show, but from there the works on display stretch further back in history, as well as forward to the present day, to tell all kinds of stories.

“1883 was the establishment of the first cattle station on Gurindji country, and so the exhibition, through the works represented, basically traces that colonial impact through to what led to the Walk-Off in ’66,” Dr Croft says. “But it also looks at the personal stories of community members who are part of the Stolen Generations – that’s my family’s experience, and family members that I worked with. It was also to try and contextualise what that important moment in history … means in a contemporary setting in the 21st century.”

The exhibition is made up of both newly commissioned work and archival material spanning a wide range of media – photographs, immersive exhibits, historical paintings, film footage, textiles and found objects.

“[There] are oral histories recorded with community members, there are found objects from the second Wave Hill station, Jinparrak,” Dr Croft says. “There are ancient tools that found us on Country during site visits, there are works on paper created by artists during a cultural exchange in Canberra.”

Paintings depict events surrounding the station, including an aeroplane crash in late 1929 and the floods that washed away the original station in 1924.

There are also works by Croft, who is an artist as well as a curator, including a major immersive audio-visual projection work Retrac(k)ing Country and (s)kin - “retracing, re-tracking country and kin” that visitors can walk around and through. The exhibition was developed as part of her doctoral research in collaboration with family and community, and as part of this Croft walked the 22-kilometre Wave Hill Walk-Off Track with family members, cousins and nephews who acted as guides. Representations of the track are included in the exhibition.

Still in My Mind first opened in 2017 at UNSW Galleries, Sydney, and has been touring nationally since then.

“It continues to have contemporary resonance, and I’m really happy that it’s come to [Bunjilaka Aboriginal Cultural Centre] because of the connections with supporters of the Wave Hill walk-off back in the ’60s,” says Croft. “Some of the first big land rights marches were in Melbourne in 1968 – so there’s a reason why we’ve chosen particular venues on the national tour.”

Dr Croft, who has worked as an artist, curator, educator and researcher for over three and a half decades, says this is the most personal show she’s worked on outside of solo exhibitions.

“I just felt a huge responsibility to my family, particularly elders in the community – it was a massive privilege to be able to work with really senior Knowledge Holders.” In her work, she explains, “I’ve always drawn on personal archives. And I use that in my work. That’s a way of healing. It’s a way of reclaiming that story. It’s a way of telling my father and grandmother’s stories – those stories that were for so long wiped from Australian society.”

And Still in My Mind is one part of a bigger story. Though Croft started her PhD in 2012, she explains that she has been working with her community for decades, including recording oral histories since the late ’80s.

“It’s a project that’s going to be ongoing – it will be a project that I do really until the end of my days, because it’s not a stop-start project,” she says. “This exhibition was a way of pulling all of that material together in some format that can hopefully share those multiple histories and stories with a broader audience … the more you share those stories with non-Indigenous peoples, the better understanding they’ll have of the complexities of our lives.”

Still in My Mind: Gurindji Location, Experience and Visuality is on display at the Bunjilaka Aboriginal Cultural Centre until May 15, 2022. Book tickets.