Produced by Broadsheet in partnership
with Bendigo Tourism.

Inside the Marimekko Exhibition at Bendigo Art Gallery

A Finnish icon of fashion is on display in regional Victoria. In partnership with Bendigo Tourism, we speak to the exhibition’s curator about how Marimekko remains modern. 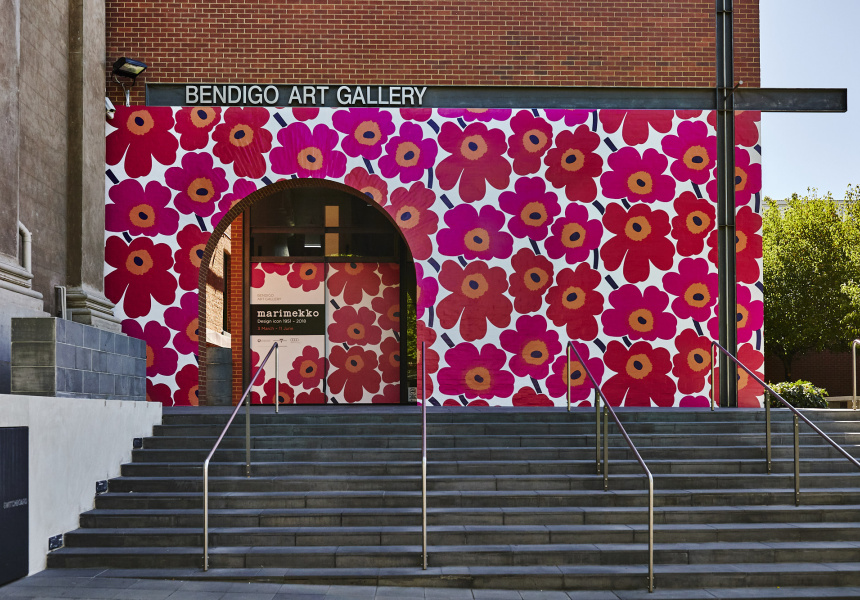 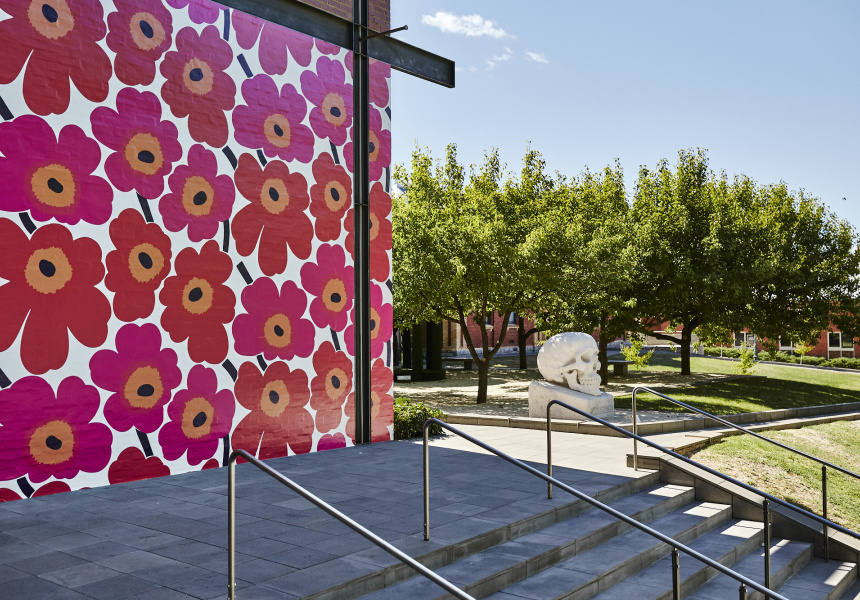 Bendigo Art Gallery has built a reputation for its fashion-focused exhibitions – and fashion from the hands of bold females at that. Iconic names such as Grace Kelly, Dior, Marilyn Monroe, Edith Head, and California’s Fashion Institute of Design & Merchandising have all graced the galleries floor. To that you can now add Marimekko. On now, Marimekko: Design Icon 1951 to 2018 is a retrospective of the iconic Finnish company that will run until June 11.

Today we recognise Marimekko for its striking patterns emblazoned across teapots and cushions. But it all started with a dress. “Armi Ratia was very focused on empowering women,” says exhibition curator Leanne Fitzgibbon. “These styles were in stark contrast to the likes of Dior with the cinched-in waists and that very restricted, corseted shape that had bound women for such a long time.”

Marimekko translates to “Mary dress”, and the brand’s A-line, free-fitting robes and oversized button-ups with practical pockets helped unshackle women from restrictive silhouettes of the 1950s. “When you see the Mary dress – women could move in them, they could be free in them,” says Fitzgibbon. “You could run; you could work.”

Colour was also a pivotal player. Ratia was continually seeking to surprise, and bold prints and colours were part of that intention from day dot. “In a country like Finland that’s in darkness for several months of the year, colour affects your mood and your emotions,” says the curator. “[That colour] is uplifting as soon as you walk into the exhibition.”

Some of the original patterns are still in use today, reinvented in new colourways or dimensions each year, allowing a timelessness and longevity that’s rare in the realm of fast and trend-based fashion. The most recognisable is the Marimekko signature Unikko (Poppy), created by influential designer Maija Isola.

In 1950 Ratia’s husband Viljo Ratia was a partner in a struggling oilcloth manufacturing company called Printex. He had asked Armi to develop printed patterns for the company’s textiles. Printex went bust, but Armi – having studied at Helsinki's Central School of Industrial Art – had already enlisted the help of fellow student Maija Isola and begun creating arresting iconography. Marimekko was born, and Isola would go on to design more than 500 textile patterns in her 38 years with Marimekko – including the everlasting Unikko.

This audacious new fashion of the ’50s caught the eye of public figures such as American artist Georgia O'Keeffe, American-Canadian journalist and activist Jane Jacobs, and Jacqueline Kennedy Onassis, who was then in campaign mode prior to her husband JFK being elected. The first lady purchased eight Marimekko dresses in total, and wore a pink version when posing alongside her husband for the cover of Sports Illustrated in 1960. Some of those very dresses are on display in Bendigo.

The printing of the iconic patterns was all completed by hand (by long-limbed females who could reach across the wide screen-printing tables) until 1973 when new technology was introduced. And while leading ladies Armi Ratia and Maija Isola have since passed on, Isola trained her daughter Kristina Isola as a Marimekko designer and the pair collaborated for some time. Kristina then passed the knowledge and tradition to her daughter Emma, who continues to consult on the respectful use of her grandmother’s original artworks. “It’s become a dynasty of poppy pattern,” says Kivilinna.

Marimekko: Design Icon 1951 to 2018 is curated in partnership with Harry Kivilinna from the Design Museum in Helsinki. The city is also the brand’s birthplace and it still maintains a factory there. “The printing of the materials is still all done in Helsinki and they are quite proud of this,” says Kivilinna.

The exhibition features more than 60 Marimekko outfits from throughout the decades, as well as homewares, swathes of fabric, sketches, photography and film, rendered in themes rather than chronology, each room celebrating the important work of the individual textile and fashion designers.

This Australian exclusive is open now and will run until June 11. It has toured seven locations in Japan over the past three years, and Bendigo is its last stop before returning to Helsinki. All the more reason to visit.

This article is produced by Broadsheet in partnership with Bendigo Tourism.

Produced by Broadsheet in partnership
with Bendigo Tourism. Learn more about partner content on Broadsheet.