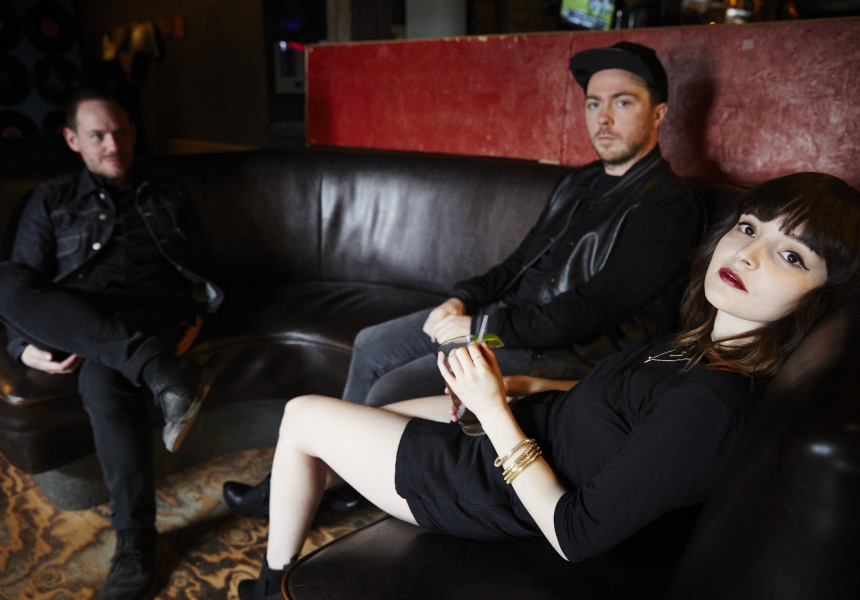 Chvrches’ debut album may have catapulted the band across the world’s biggest festival stages – Glastonbury, Coachella, Reading, Lollapalooza, Splendour – and they’ll be back in Australia early next year for Laneway. But for the Glasgow trio touring wasn’t the inspiration for their follow-up.

“We never wanted to write a second record all about being on the road,” says frontwoman Lauren Mayberry, whose clarion-call vocals spearhead the band’s impassioned electro-pop anthems. “I don’t find that very engaging.” That said, the cathartic tracks Make Them Gold and Empty Threat were inspired by the band’s experiences between albums. Most of the other songs are about personal relationships. “We always want what we’re writing to feel authentic,” she explains, “so I tend to write from a personal point of view.”

That emotional authenticity was behind the instant success of 2013’s The Bones of What You Believe, and it’s only amplified on the band’s second LP. Every Open Eye again sets Mayberry’s diamond-sharp delivery to a glistening mirror maze of 1980s-style synth hooks and head-rush rhythms. Despite the three-piece beginning as a humble recording project, its percolating urgency and soaring choruses have always sounded ideal for large-scale festival uplifts.

Mayberry and bandmates Iain Cook and Martin Doherty all play synths in Chvrches – each had that role in previous bands. “We found a place where no one judged us for wanting to play keyboards all the time,” she says, laughing. They also self-produce their records as a rule. “It’s more relaxed that way,” she says. “We could figure out what we wanted the (new) record to be, just the three of us. Nobody knows better what Chvrches is than we do.”

The band usually records vocals for a song’s verses and chorus separately, which might explain how powerfully each section hits. (And Doherty sings lead for one or two songs on each album, changing up the vibe.) But the new album’s closing ballad, Afterglow – think Cyndi Lauper’s True Colors – is one vocal take straight through. “We wanted the vocals to feel quite raw and in the moment,” she says.

While Lauper and Eurythmics were among her early gateways to 1980s pop, Mayberry has many influences beyond that, singling out Fiona Apple, Joan Armatrading and Paramore’s Hayley Williams. But though she learns from singers of any genre, it’s most important for her to sound like herself. “I just started singing in a way that felt natural for my voice,” she recalls. “It sounds like a genuine version of my voice, not pretending to be somebody else.”

Mayberry has a law degree and a masters in journalism, and helped found the Glasgow feminist collective TYCI, which produces zines, shows and more. She has also spoken out about the sexism and misogyny she’s faced in the music industry and online, penning a widely shared Guardian op-ed on the subject in 2013.

“It’s nice to take what could have been a negative emotion and turn it into something more positive,” she says. Indeed, the line “Bury it and rise above” in Bury It provides one of the new album’s catchiest and most potent mantras.

“This record’s got some of the darkest stuff we’ve ever written,” says Mayberry. “But it’s got some of the most hopeful and forward-facing stuff as well. It feels very genuine, because that’s the human experience I’ve had so far.”

Every Open Eye is out on September 25 through Liberator Music/Goodbye Records. Chvrches will play the Laneway Festival.