The Royal Antediluvian Order of Buffaloes, which owns the building, is putting it up for auction. 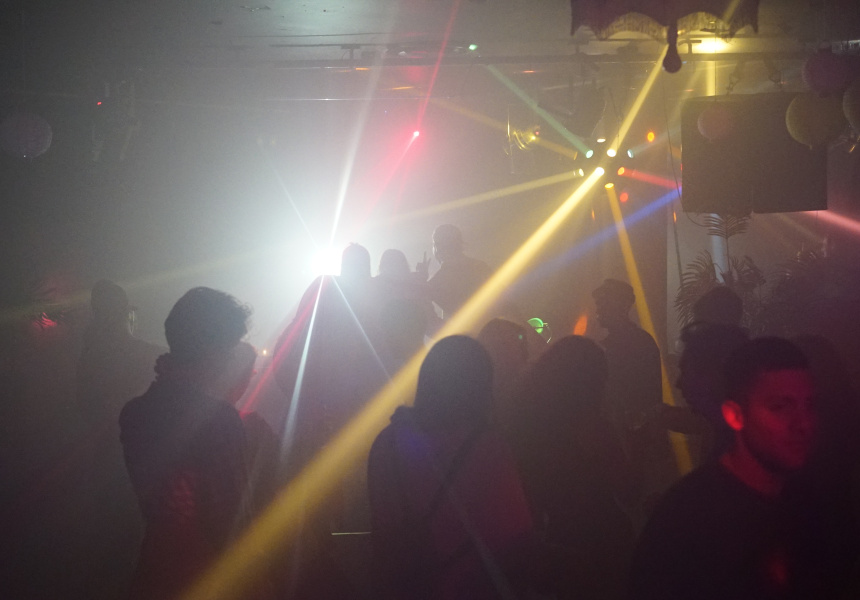 Melbourne’s home of freewheeling all-night dance parties, Hugs & Kisses, will close its doors following an auction later this month. The nightclub is located on the second level of the Royal Antediluvian Order of Buffaloes (RAOB) headquarters on Sutherland Street, down a warren of laneways in Melbourne’s CBD. It was known for adventurous programming and had a reputation as a safe space for explorations of non-hetero sexuality and gender fluidity.

Operator Hugo Atkins, who runs the club along with Melbourne party doyen Andee Frost, first launched under the Buffalo Club banner in 2010 before rebranding as Hugs & Kisses in 2014. He’s developed many fond memories during that time, but says his defining experience is going up into the lighting booth and “looking out over the foggy neon-pink view of topless torsos floating in a sea of bliss. That peak hour where the bar’s at a steady pace, the rush is over, the main DJs half way through their set and everyone’s connected to the groove.”

For those unfamiliar with the club, it ran under an unusual licensing arrangement. Atkins operated Hugs & Kisses as a subsidiary social club of the RAOB, a century-old men’s lodge. Those going to the nightclub either needed to be a member or sign in at the door as a guest of one.

“I wish we could keep going but I think we were lucky it went that long as well. A lot of police hadn't dealt with a full club license before, which could cause some problems for us. Obviously we overcame those adversities but it was always a hot little ticket,” says Atkins.

The news came at a bad time for Atkins who had just bought an impressive Funktion-One sound system from revered nightclub the Mercat, which closed last year. Since learning the news of the auction he’s been tentatively looking for a new site, but says there are many obstacles to finding something comparable.

“Finding a liquor license in the CBD that goes past one is going to be really difficult. The only way to do it is to buy an existing permit which comes with a price tag,” says Atkins. “The 1am freeze [on new licenses] is really stagnating the culture at the moment.”

Despite these challenges he would like to stay in the CBD if possible, rather than finding another location in Melbourne’s suburbs, although he’s open to the prospect.

“We’ve always liked being in the CBD, I hung out in the CBD as a kid and I kind of think that’s where the action’s at. It really depends on the property and if we can find something that would work,” says Atkins.

The property is expected to reach $4 million at auction when it goes under the hammer on March 16. Depending on who buys the property, Atkins may be able to stay while the new owners decide how to proceed with their purchase. He’s expecting full details a couple of weeks after the auction, at which point the all-important closing parties will be planned.

“It was always a ticking time bomb in regards to the city being developed. I think it’s pretty sad each time that stuff happens. It’s one of the last bastions of that era that’s been holding out,” he says. “I think it’s a really big blow for the city.”

Despite sadness over the impending closure, Atkins wants to thank everyone who crossed the dance floor over the years.

“I’d like to thank everybody for supporting us. We’ve learnt a lot about ourselves and we’ve grown. It has offered people a place for them to express themselves. All those expressions have been really beautiful and we thank you for making them happen in this place.”