How to Catch a Ghost

Ahead of his appearance at The Wheeler Centre, we chat with astronomer Dr Alan Duffy about cracking the greatest unsolved mystery of the universe. Dr Alan Duffy is a ghost-hunter.

For the past 10 years he’s been chasing evidence of something no human has ever seen or felt, yet it makes up 85 per cent of matter in the infinite universe – including on Earth. The things we can see – an apple, the sun, distant galaxies, all that humanity has ever observed – is only a tiny fraction of what’s actually there.

“My entire professional academic career has been to obsess about dark matter,” Duffy, an astronomer and Swinburne University research fellow, explains over lunch at Smith Street Alimentari. The official excuse for our meeting is the new festival of questions at The Wheeler Centre, The Interrobang, for which he’ll be tackling the question: “does the universe have a memory?”, among other head-scratchers. The real reason? Dark matter is bloody fascinating, and this is the guy to learn about it from.

This stuff weighs five times more than the ordinary matter we can observe – yet we don’t know what it is or how it works. As Neil deGrasse Tyson puts it, it’s the longest-standing unsolved problem in astrophysics.

So, how do we know it exists? When astronomers such as Duffy look into space, they can see what’s out there: the planets, the stars, the galaxies, the comets, black holes. But something doesn’t add up. There’s way more gravity in the universe than we can account for.

“We see stars flying around in galaxies far faster than should be possible, when there’s not enough gravity from the visible material to hold onto them, and the galaxy should fly apart,” Duffy says. “Either our theory of gravity is wrong (which we have tested), or there’s more material out there providing the extra gravity. This material has to be invisible or else we’d already have seen it. Hence, ‘dark’ matter’.”

How do you begin to detect something that’s not only invisible, but also doesn’t even notice physical barriers? It floats straight through them, like a phantom. Thirty minutes into our conversation, Duffy casually tells me that at least half a billion dark-matter particles have flown through my body since we started talking.

As Duffy explains, there are two ways he works to trap a ghost.

The first way: he builds universes on supercomputers.

“We can create model universes,” he says. “We throw in all the physics that we think we know, including a model of dark matter, and just let a galaxy grow and see what it looks like. If it looks like the Milky Way: good. If not (which is always the case), why not? What’s missing? And is it the nature of dark matter?”

As Duffy explains it, these supercomputers act as a laboratory in which he can test out his wildest theories on dark matter – ruling out possibilities one by one and, hopefully, narrowing in on an answer. With an infinitely complex universe, however, this can take a pretty long time.

The second way Duffy is working to capture and explain dark matter is occurring in a most unexpected place. A few hours drive north-west of Melbourne, one kilometre under the ground in a gold mine in a town called Stawell, is the first dark-matter detector in the Southern Hemisphere. The kilometre of rock above stops the radiation from space interfering with the detector.

The theory: once in a while, very, very occasionally, a dark-matter particle might have a head-on collision with an atom. When this happens, there’ll be a very faint flash of light. That’s what the scientists are hoping the detector will see.

I thought this interview might get a bit complicated, so I brought a box of crayons for Duffy to use to make some visual representations: 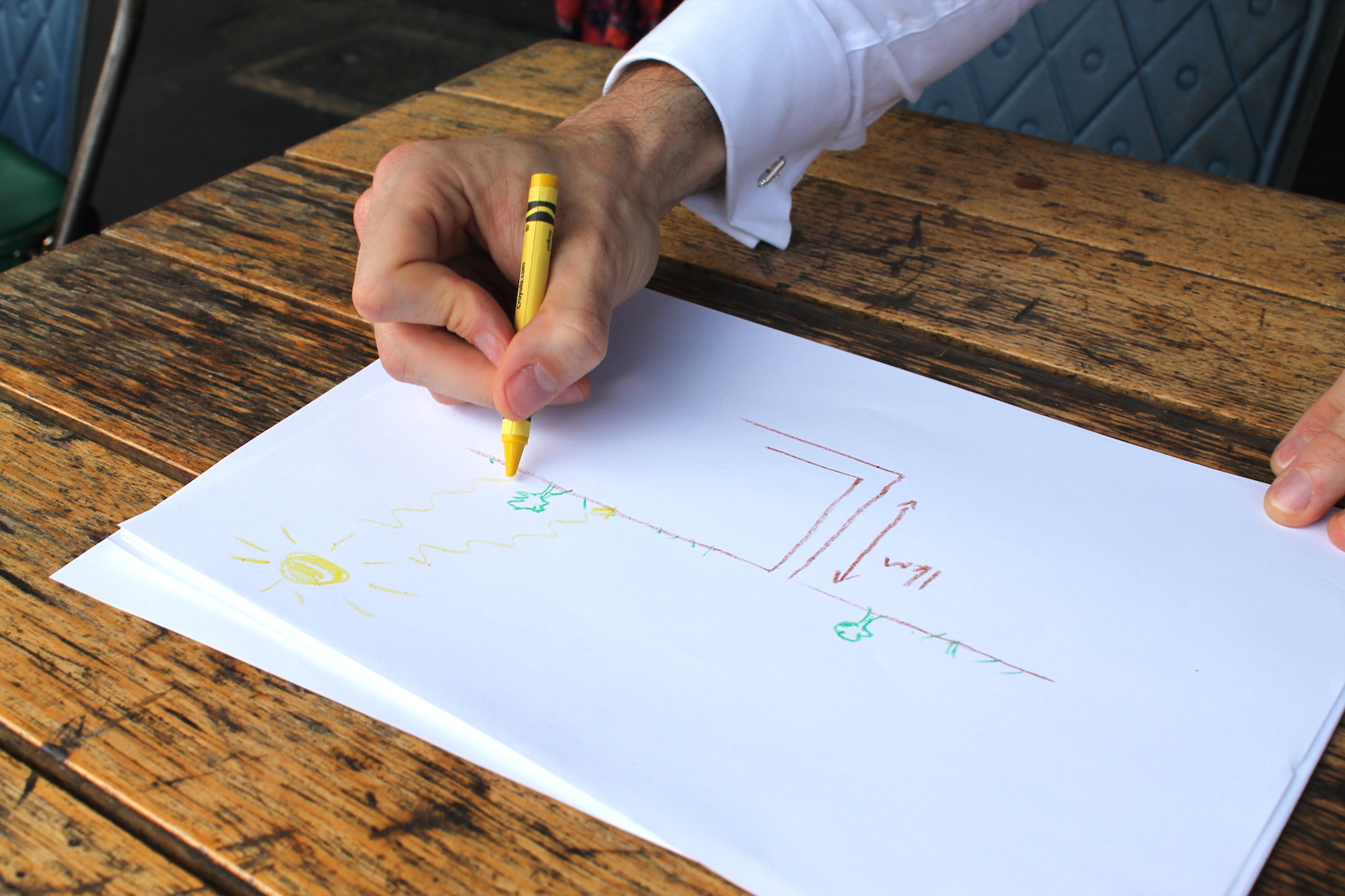 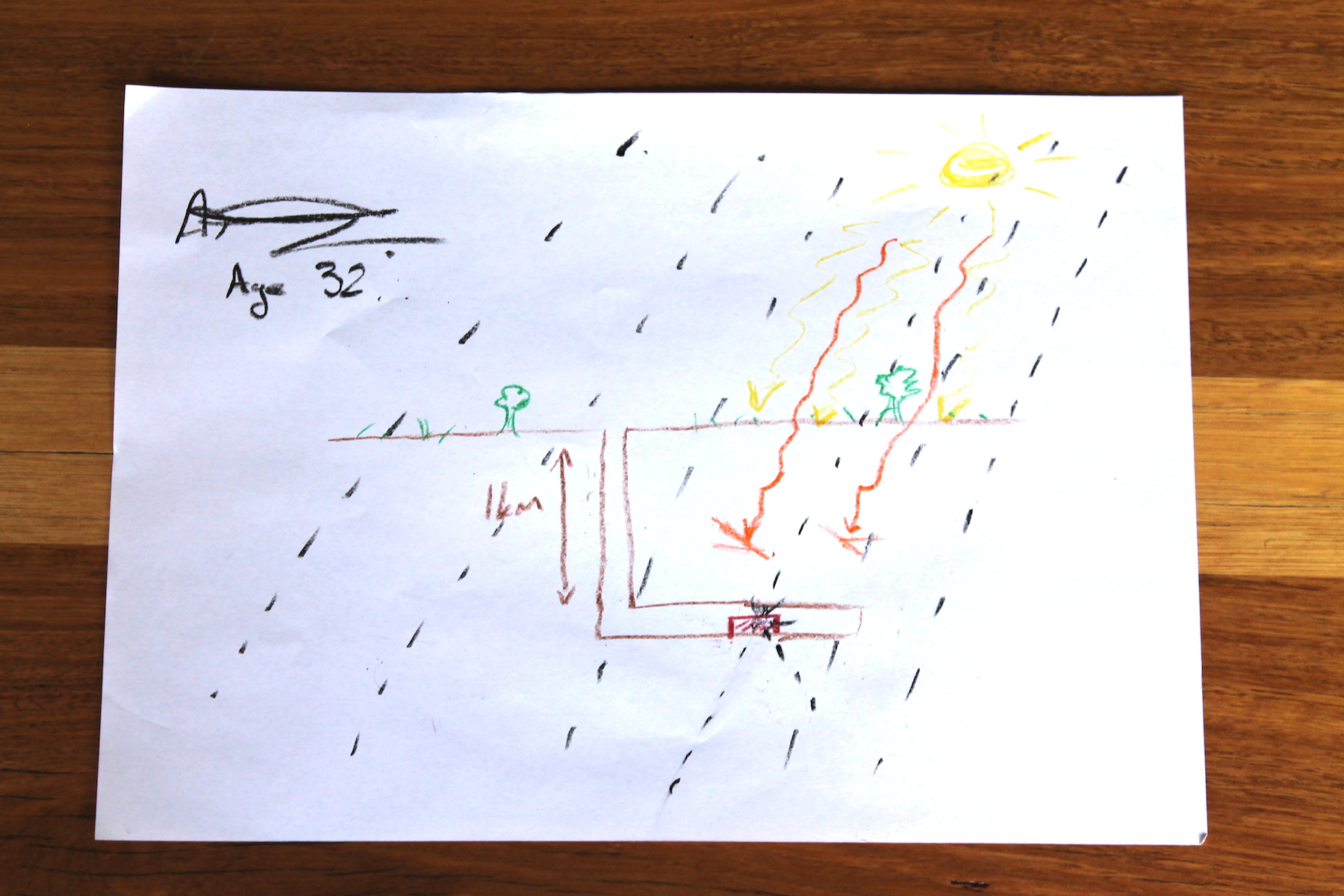 Duffy, working as part of an international team, is under no illusions about how easy this search will be.

“You have to be really confident that the flash of light you saw is truly from the dark matter hitting it [an atom], as opposed to anything hitting your detector,” he says. “The analogy is, if you’re in a stadium and you see flash photography everywhere, your goal is to pick out your friend who’s taking a picture, and they didn’t tell you when. It’s insanely challenging.”

So, why all this effort? Why does discovering dark matter, matter?

Think of it as the next greatest discovery on our way to understanding the nature of our universe and its origins, on a par with Darwin’s theory of evolution by natural selection and Einstein’s theory of general relativity.

“It will open up a whole new direction in particle physics,” he explains.

The more we understand the way our universe works, the better we can know our past and future.

For example, we’ll unlock more fun facts like this: the Milky Way will definitely collide with our neighbouring galaxy, Andromeda. “About five billion years from now, the first stages of the collision will be occurring. The sky will be ablaze with new stars that form from the gas stirred up by the gravity of the galaxy getting closer. The night sky will be awesome. It will be a spectacle, the biggest fireworks show lasting hundreds of millions of years.”

Dr Alan Duffy is appearing at The Interrobang: A Festival of Questions at The Wheeler Centre over three sessions: Questions on notice; Does the universe have a memory?; and Questions for ethical thinking in strange times.