Bowls, beers and barbeques – an afternoon on one of these Melbourne lawns is time well spent. Don your whites, lose your shoes and get bowling this weekend. 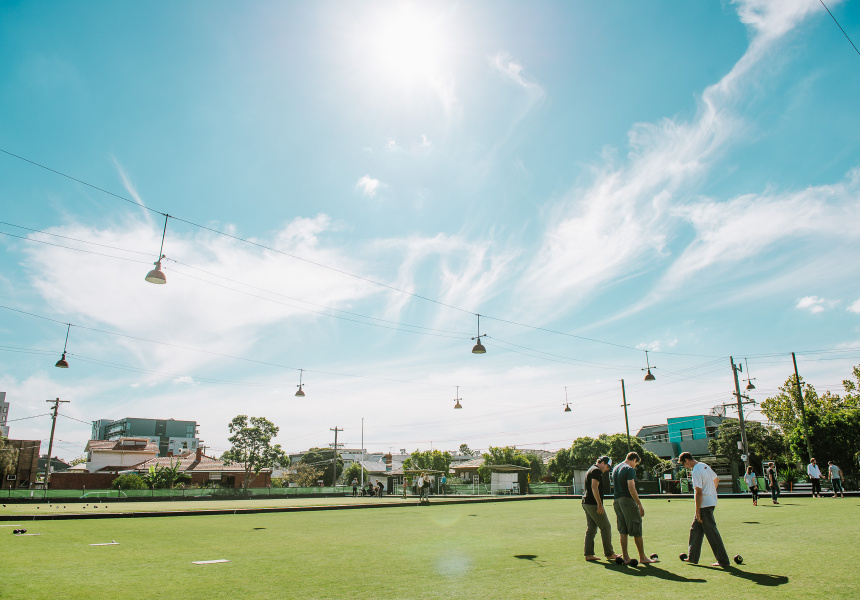 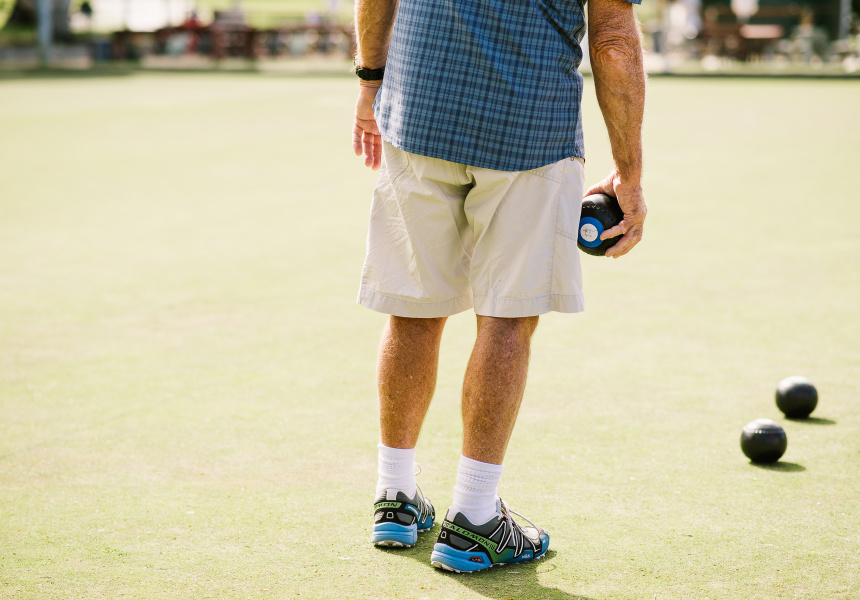 Walking into a Melbourne bowls club is like walking into a barbeque for the extended family. You’re not sure who’s going to be there, but you’ll be handed a tinnie, someone will put their back out and there’ll be some good stories going around.

Even though the white-clad veterans are the lifeblood of clubs, it’s the barefoot bowlers and younger generations, fluking their way through the score sheet, that help keep these clubs in business.

Take some time out on the green this weekend and put your best foot forward.

“It’s a really easy game to learn, but it’s a hard game to master and even though there’s a stigma that this is an activity for old people, it’s not,” says club volunteer and two-year member, Dianne Chitty.

Nestled in the leafy grounds of Princes Park in Carlton, the bowls club sits just behind the fountain.

The club is relatively small, but finding a seat at the wooden picnic tables or bench seats placed around the rink is usually easy. There is also a bar located outside, recently renovated in 2015, and has the same friendly character as the rest of the club.

Currently there’s a huge selection of local tinnies and craft beers as well as imported German beers and a decent wine selection.

Social membership costs $50, which gets you unlimited bowling all year round and discounted bar prices. Casual barefoot bowlers can pay $15-20 for two hours.

“It doesn’t matter who has a shoulder injury or who’s just had a hip replacement, everyone’s committed to being a good club member, not just a bowler,” says Chitty.

This club is basically a glorified beer garden, with two large greens for bowling, if you feel like it. It’s a destination for bowlers but it’s also a great hangout for locals.

“It’s a little oasis among all of these bigger buildings now in Brunswick,” says operations and marketing manager, Simon Grout.

There’s nothing on tap, but the bar prices are still very reasonable and you won’t pay more than $7 for a Mountain Goat, Hawker's Pale Ale, Stone and Wood, or a White Rabbit. It’s only $5 for house wine too.

Speaking of cheap, for $15 you get your own rink for five hours and for an extra $30 you can hire a barbecue. The club has you covered for your BBQ, offering DIY meat packs priced between $9.50 and $11.50 per head, offering locally sourced produce.

Outside is a mix of old and new: a huge section of wooden tables and vintage, lime-green bench seats to hang out on. White tin sheds line the lawns and huge brass lights float above. Inside you can entertain yourself with pool or table tennis.

“We’re going to break all of the rules and drink on the green,” says Grout.

“It’s a home away from home for many of the members who are here five or six days a week,” says head manager Mark Dobbin.

If they’re not playing pennant, then you can typically find the members watching cricket or AFL inside.

“But the club is what we like to call a “broad church” – where all of the older members and younger bowlers get along very well.”

On a weekend, the club greens are busy with barefoot bowlers, typically celebrating birthdays, engagements and bucks nights – it’s not unusual to find a grown man in a red leotard roaming around. There are three greens, with 20 rinks, all positioned to capture magnificent sunset views.

For non-members, it’s $10 a head per hour, or you can invest in a $50 social membership and you’ll be, “Very well looked after” according to Dobbin. It includes use of the greens and cheaper bar prices.

“So many of the younger members come here as an alternative to the pub because it actually is a bargain,” says Dobbin.

The Melbourne Bowling Club is recognised as the oldest club in Australia. The club’s brush with fame was in 2002 when it was the location for Australian (cult?) film, Crackerjack. It also boasts a very impressive trophy cabinet.

The club is a charming blend of new and old. There’s James Squire golden ale, Furphy's and Pipsqueak cider on tap, but of course you can also get a pint of Tooheys Old or XXXX Gold, as well as international beers.

For barefoot bowlers it’s $20 a head for two hours. The club also offers an $80 provisional membership, where you and seven friends can bowl for half price and drink at members’ prices. A $50 social membership will get you members' prices at the bar too.

Within Edinburgh Gardens, the club was built in 2001 (pretty recent in comparison to the original clubs with century status) when the Victoria Park and Fitzroy bowls clubs united.

With 12 outdoor areas and 10 bowling rinks, the club is built for entertaining, also sporting a marquee and wood fire pizza oven (all available for hire).

Outside there are 11 barbeque beer gardens available to hire at $60 for three hours, on top of the rink hire of $150 (up to 10 people). Or it’s $15 a head for two hours (without the barbeque facilities). There’s also an outside marquee bar for hire.

On any regular day you can catch the older members sinking beers and watching sport, but over the weekend there’s a lively scene involving barefoot bowling and beer drinking as well as tournaments (in season).

On Sundays, the club offers a free hour session of barefoot bowling for all that like their page and check in on Facebook between 12-5. Live entertainment is provided.

There’s a huge range of bottled beers available, from Little Creatures and Stone and Wood to Budweiser and Samuel Adams. On tap is Coopers, Carlton Draught, Fat Yak and Bulmers and it can even do jugs of sangria using Fog City cider.

“If someone walks in off the street and they’ve never bowled before, then we’ll show them how to,” says Ross Durham, treasurer of Flemington Kensington Bowls Club.

Driving down Racecourse Road heading west, it’s impossible to miss the bright-green synthetic turf – it’s like a neon beacon. The rink is quite small, but wooden tables, bench seats and barbeques circle the ground and make for a relaxed, spectator vibe.

The interior seems from another era: there are doors with yellow stained glass and blue Aztec carpet, which leads through an archway to the bar.

“The carpet’s been here as long as I have,” says Durham, who’s been a member of the club for 30 years.

The beer selection is impressive. There's an extensive list of craft beers and ciders on tap, including Two Birds Golden Ale and Golden Axe cider, but bottled beers include Sierra Nevada, Moon Dog, Brew Dog and Coopers, all priced between $3.50 and $7.

You can’t beat the barefoot-bowling prices here. $10 gets you two hours of barefoot bowls.

“It’s our way of providing a community service, by introducing people to bowling,” says Durham.