A twitching peacock of gristle and sweat, barking into his microphone like it just took his car space. A commanding display of feminine fire and matriarchal power. And an act that loosened the tightest of hip flexors. It was another reliably perverse line-up laced with joy, celebration, and a little bit of rage. 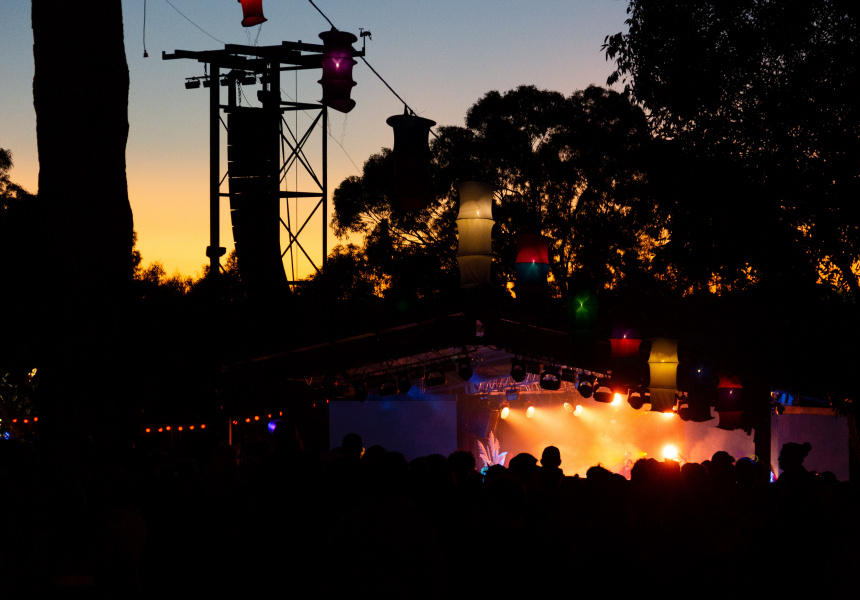 Update: On Thursday March 12 a person who attended the festival was revealed to have been diagnosed with Coronavirus. More here.

Idiosyncratic personalities defined the 14th annual Golden Plains. This year, the two-day music festival was divided down its spine: the Saturday pale and overcast, mirroring its headliners’ songs pocked with rude excavations of the human condition. And on Sunday, the sun drenched the woolly green grass of the Supernatural Amphitheatre as the line-up gifted us joyful celebrations and cathartic singalongs. Sure, at least three of those singalongs involved the DJs between acts playing Rock the Casbah, but when it works, it works.

After a moving First People’s smoking ceremony to open the weekend – followed by an extended personal wrestle with a new tent and some calculations about the likelihood of contracting Coronavirus en masse – the Saturday line-up rolled out the outliers.

From the strident, new-wave goth-pop of Simona Castricum to the boisterous pop-rap of Agung Mango (who replaced Phoenix rap trio Injury Reserve after a late scratching) and into the sizzling good-time jazz-funk of brilliant London ensemble Ezra Collective, who delivered the amphitheatre its first mass dance party, the single-stage festival’s genre whiplash was in full effect. Then it turned the screw.

Bookers might have originally anticipated US goth-folk hero Bill Callahan strumming his acoustic to a gentle sunset. But as the slate clouds stayed closed, the baritone-voiced singer wordlessly took the stage and stared the crowd down through spare, slow songs drawn mostly from his latest record, Shepherd in a Sheepskin Vest. Back catalogue gems America! and Let’s Move to the Country moved the needle a mite, and a cover of Leonard Cohen’s So Long, Marianne had couples swaying, but otherwise Callahan’s droll, skeletal songs of death, doom and being a new dad prickled against the incoming dark.

But then long-running UK indie-pop icons Stereolab turned up the lights – and the BPM – for a welcome set of noisy, urgent drone-pop. Even if their onstage demeanour didn’t exactly scream fun, fuzzy lo-fi staples such as French Disko and Lo Boob Oscillator proved muscular and grand in the live setting, and the dance-y Metronomic Underground and Percolator giddy highlights. “No dickheads?” asked singer Laetitia Sadier at one point, referring to the festival’s stipulation of entry. “Superb.”

But then the dickheads arrived – at least in vivid character portraits. No one spits “fuck off” with such body-wracking venom as Jason Williamson. The frontman of UK electro-punk duo Sleaford Mods was a twitching peacock of gristle and sweat, barking into his microphone like it just took his car space. He and producer bandmate Andrew Fearn – who does little on stage beyond pressing play on his laptop and swaying from side to side with a beer – were a fearsomely dissonant presence in the ‘Sup. It has something to do with how immediately they drag you into their grim vision of nihilistic boredom, grubby depressed UK cities, and the vitriol that lurks in their poetic tales of angry middle-aged men pinned in a life they hate. You might say in a crowd of mates ready to party in the bush, it bristled.

Over Fearn’s rudimentary electro beats, Williamson’s voice scratched like a wiry guitar, sarcastically yelling “I got a Brit Award” on McFlurry; “I hate going out, going out is for young people” on TCR; and “Push in, don’t push me / I was here first, you cunt / Can’t you fuckin’ see?” on the hectic Jolly Fucker. It made for one of the most punk and arresting 45 minutes I’ve seen at Golden Plains – an electrifyingly aggressive attack, but also a heavy mood that was hard to shake.

Exuberant blue-haired South African singer and dancer Moonchild Sanelly and her twerking DJ blew away some of the tense cobwebs with a bouncy, celebratory set of trap beats and accurately self-described “future ghetto pop” that had the amphitheatre quaking. But when the aggression returned around 2am with Parramatta hip-hop heads Slim Set, I took off for entertainment elsewhere.

By midday Sunday the sunshine was out and the $14 Hare Krishna feast plate was again restoring life-force to anyone (me) who graced its orbit. Lying on the grass under the shade of a tree was probably not how Natalie Mering – aka US chamber-pop singer Weyes Blood – imagines her audience receiving her work, but it was the correct position to be soothed by her classic-sounding Laurel Canyon-esque songs of drama and longing. Local collective Bananagun brought an obscene number of members on stage to whir their psych-pop panoply of foot-tapping summer jams to life, something Golden Plains always seems to nail on a Sunday afternoon.

That vibe sustained through Oz heartland-rock lifer Joe Camilleri and The Black Sorrows trading sax and Strat licks. Then the booming bass and rap-horn sirens of UK jungle producer General Levy kicked in and ... silence. The power to the stage cut out. With a half-hour massage booked 20 metres away, rather than wait around I went and lay face down on a table in my undies for a bit. Fortunately for everyone but me, power was soon restored and the sounds of Levy destroying the joint with frenzied scattershot percussion became the soundtrack to an expert loosening of my hip flexors.

As dusk fell on the canyon beyond the festival grounds, the ritual cheers at the sun dipping behind the western tablelands gave way to gasps at the huge full moon rising in the pink sky to the east. And then … silence. Again.

After a nervous wait well past Sampa the Great’s allotted start time, a voice finally boomed over the PA. “We’ve had a generator to the stage go down,” it said. “Fortunately, we have another one next to it. The show will go on.” Cue elation.

Thank the heavens. With Venus hanging lonesome in the sky directly above the stage, Sampa the Great strode through a black curtain, which fell away to reveal an awesome red-clad band and a thundering rendition of Rhymes to the East. If there was any residue from Sleaford Mods’s painting of the ugly male psyche left over from the previous night, Sampa spiked it with a commanding display of feminine fire and matriarchal power.

Energy (“If I ruled the world, money stacks for all my daughters”) and Freedom (“Just to let you know / We’ve won”) brought a jolt of joy to the party, and the one-two punch of closers OMG and Final Form sent it into arse-shaking rapture. Suddenly that generator blowing felt like the universe pausing to allow us to adequately prepare.

Sometimes, seeing a legacy act illuminates the artists that followed as much as the act itself. As the Pixies ran through an hour and a half of their huge catalogue, you heard the inspiration for every indie-rock, grunge and art-rock band from the last 20 years. From the opening gurning bassline of Gouge Away, the beloved Boston band sounded massive, frontman Black Francis’s voice as shredded and dour as ever. Swinging between twisted surf-rock and huge pure pop singalongs, new tunes Witching Hour and the dreamy Daniel Boone stood up next to deep cuts Hey and Caribou. But it was the long and ecstatic string of hits in Where is My Mind, Here Comes Your Man, Debaser, Wave of Mutilation, and closer Monkey Gone to Heaven that powered the night. Black Francis may have barely acknowledged the crowd and the quartet’s bow at the end of the night was pure fan-service, but – unlike so many bands they inspired – those songs clearly still mean so much to so many.

And then: lift off. Is there a better festival band than Hot Chip? The UK six-piece bounded on stage, cranked into Huarache Lights and effortlessly detonated the evening with a wall-to-wall set of bangers that strode the line between belting rock ensemble and telekinetic all-time dance unit. Golden Plains has this thing now, where lights perched high on the speaker towers above the stage sputter to life and strobe, and it feels for all the world like you’re transported to a steamy hall rather than a field in regional Victoria. Hot Chip took that hallucination and made it real. Classic tracks Over and Over, Boy From School, One Life Stand, Ready for the Floor and Flutes piqued a sort of collective nirvana. Throw in a blistering cover of the Beastie Boys’ Sabotage into the mix and you have a Golden Plains set for the history books.

Soon after when local DJ Prequel, shirtless and clearly having the time of his life, hoisted a set of loved-up house and techno between two bouquets of shiny red inflatable hearts, followed by a powerful spell of gospel-tinged techno from Detroit father-daughter duo Floorplan, the festival’s moments of unease from 24 hours earlier were fully, blissfully jettisoned.

“It feels like you just have to show up,” a friend said of the evidence of care Golden Plains’ organisers have for its annual citizens. Young trees now dot the grasslands and will in years’ time throw shade over once barren campgrounds. If you forget your tent, get one at the merch shop. Bars aplenty, and BYO drinks too. Antibacterial soap-stands, loos and drinking water never far away. No ads, no herding, no fuss. A reliably perverse line-up that challenges, provokes, invites and inspires in equal measure. Golden Plains stays one for the ages. 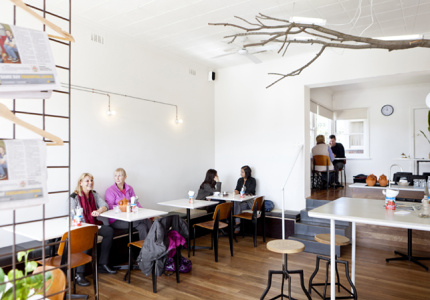