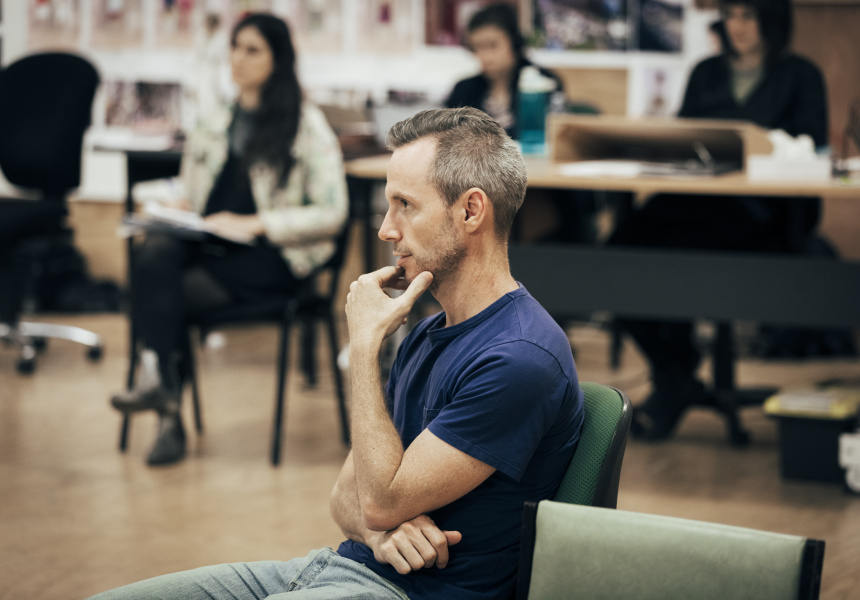 At some stage growing up, we come to the groundbreaking realisation that there’s more to our parents than just their roles as Mum or Dad – a breakthrough that the Melbourne Theatre Company (MTC) explores in its new musical, Fun Home.

“They have their own fully realised lives that you only get a peek into,” director Dean Bryant says. “It’s the difference between thinking, ‘My parents are annoying,’ and realising, ‘Oh, my parents are flawed.’” On the flip side, “Everyone has the experience of being different than what their parents hoped or expected.”

The show dives into ugly truths and a whole lot more, taking audiences to the core of what it means to be part of a family. Originally, the multi-Tony Award-winning musical adaptation was meant to premiere in Melbourne in early 2020 as a co-production between MTC and Sydney Theatre Company. But alas, lockdown – so it was produced in Sydney to rave reviews.

“The planning of it was done in a different world, so to have that world fully returning – by the time we get to do the show, we hope – will be like it straddled the whole experience,” Bryant says. “Hopefully, when we start performances in February, we’ll be in the midst of a renaissance of live performance [in Melbourne].”

The play is based on the graphic novel and memoir by cartoonist Alison Bechdel, best known for her comic strip Dykes To Watch Out For – and, of course, for creating the Bechdel test, a set of criteria for assessing female representation in a work of fiction, particularly film and television. Specifically, it requires the work to feature at least two women who talk to each other about something other than a man.

Naturally, Fun Home meets the criteria, following a young Alison as she grows up in a family funeral home in small-town America (hence Fun Home).“When Alison goes away to college,” Bryant says, “she comes out as queer. Her family don’t respond well, and what comes to the surface is that her father is a closeted homosexual who had spent the whole marriage having affairs with men.”

Bryant says the musical mimics the structure of a graphic novel, showing minutes of Alison’s life at one stage before jumping to another pivotal moment.

“Like her as a nine-year-old dealing with the fact that she was more drawn to wearing pants and having short hair, and her dad pushing back on her saying, ‘No, little girls wear dresses and have neat hair.’ Then at college, she falls in love, realises who she really is, then tries to talk to her family about that.”

The star-studded cast includes “musical theatre royalty” Silvie Paladino (Mamma Mia!) as mum Helen Bechdel, and Adam Murphy (Shakespeare in Love), who is best known as a comic actor but plays the complicated, closeted role of the father, Bruce Bechdel. To round it out, Lucy Maunder (Ladies in Black, Charlie and the Chocolate Factory) plays the “fiercely intelligent and emotional” Alison in her forties. “Getting to see these people play deeply complex roles in the musical is a real privilege,” Bryant says.

Bryant himself has an impressive CV, including Prodigal, which went off-Broadway, and the more recent Well, That Happened. The MTC-commissioned script is taken verbatim from conversations with actors about how they got through the pandemic in 2020. He hopes that Fun Home will be able to distract audiences from the slog of the last two years. “You go on this emotional roller-coaster to the tune of these incredible songs, and I feel like that’s an experience that catapults you out of the pandemic beautifully,” he says.

For more information and to book tickets, visit here.

Broadsheet readers get 20 per cent off full-price tickets for performances from February 7 to February 19, excluding Opening Night. To get the discount, enter promo code FUN20 before adding to full price tickets to cart, or simply click here. Max 4 per person.

For more information or to book, see here.