The Espy to Return on a Grand Scale

Ten bars, three band stages, two restaurants, and areas that have been closed to the public for 60 years will be open in November. 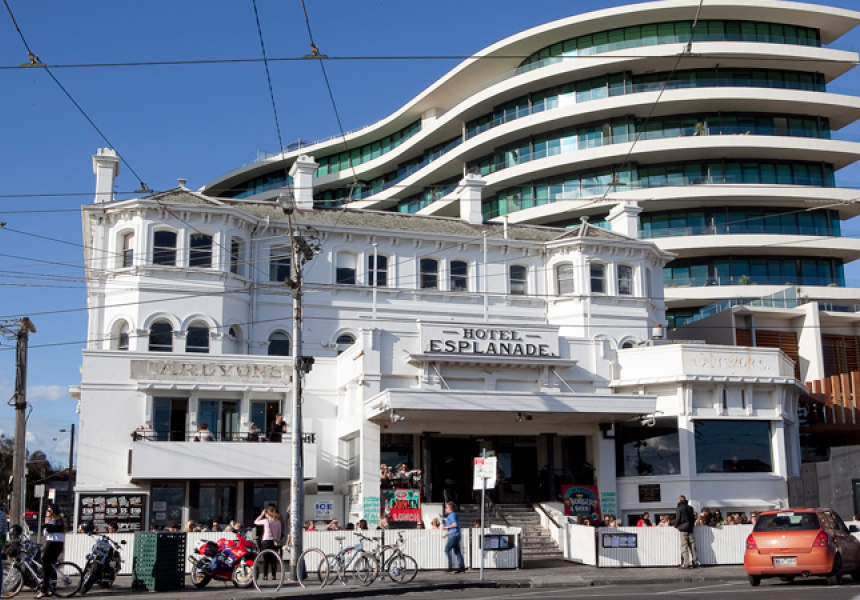 Live-music fans around Melbourne will let out a sigh of relief to hear there “will be music everywhere” when the Esplanade Hotel relaunches in November this year.

“The unique thing about The Espy is everyone knows it was a great music venue,” Sand Hill Road co-founder Andy Mullins says. “We have to make it recognisable to everyone who’s loved it over the last 40 years. The experience will be many different things to many different people, so we’re careful to not try to please any one demographic.”

The iconic “Espy”, as it’s known to Melburnians, closed for renovation in 2015 and never reopened. It wasn’t clear what would happen to the beloved pub until it was announced in 2017 that Sand Hill Road had bought the venue with plans to overhaul it. Like Sand Hill’s Garden State and the Waterside Hotel, the Espy will be a pub with many layers.

At the new Espy there’ll be three band stages, 10 bars and two restaurants across five levels.

Rockwiz (the TV music game show filmed at the Espy) co-creator Peter Bain-Hogg will head up live music at the venue. Much like the Espy of old, it’ll host a mix of artists, from huge international acts, to local up-and-comers.

Former chair of the Next Wave festival Janenne Willis is on board to create a seasonal arts and installation program, and there’ll be a bar built specifically for podcasting (punters can plug headphones into the bar and listen in live).

“The Espy was a home to arts and music in Melbourne, and it’s naturally a home for conversation,” Mullins says. “Podcasting has become a way for artists to share information and start discussions. So this was a natural choice for us. We want to invite Melburnians into the studio to make content. If you’re making a podcast at home, we want you to come in here and get it done properly.”

Executive chef Ash Hicks (ex-Circa, Garden State) will oversee the two kitchens. The Espy Kitchen, housed in the old loading bay, will have charcoal grills, pizza ovens and rotisseries manned by a team of 60 chefs ready to serve the venue’s capacity of 1700 patrons. Upstairs, Mya Tiger will be serving Cantonese dishes and refined cocktails with a view.

“We’ve got such a big pub to serve. Some of those people will just be after a meal before a gig, but there are areas where we’ll have to do something different. We’re going to bring in food carts, too. But some will just want to crack a beer from the fridge and watch the sunset in the beer garden.”

The drinks offering, developed by wine writer and sommelier Matt Skinner and Sand Hill Road group bars manager Kevin Peters, will include an “accessible” wine list, barrel-aged spirits and – without a doubt – beer.

“When you talk to people who remember the old Espy, it was all about Melbourne Bitter stubbies and pots of Carlton,” Mullins says. “Of course things have changed a bit. We’ll definitely support local craft brewers, but the masses aren’t gonna be too worried about the brand of beer they’re drinking. They’ll be thinking about having a good time with their mates.”

To inform the refurbishment, Sand Hill Road teamed up with Techne Architects and dug deep into the Espy’s history. Over the past 12 months they uncovered old marble bars and 50 years of gig posters in pristine condition. The basement, which has been closed to the public for 60 years, will be opened as a band room. The Ghost of Alfred Felton cocktail bar is inspired by a wealthy art collector who lived and died at the hotel at the turn of last century.

All grand plans aside, ultimately, for Mullins and his team, reopening The Espy will be about doing the basics well.

“Walking in off the beach, having a beer there and listening to live music. The simple stuff is what it’s all about. Everything else, and all the other work that’s gone into creating something amazing, is a bonus to me.”