The Bigness Names in Theatre

A new play at the Malthouse sees the director of The Sapphires, Wayne Blair, team up with musician, filmmaker, writer and activist, Richard Frankland. 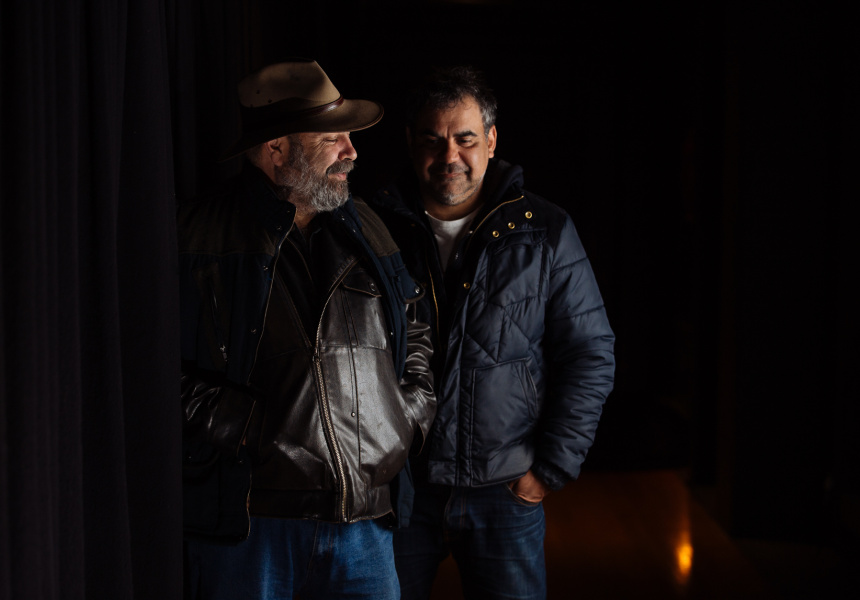 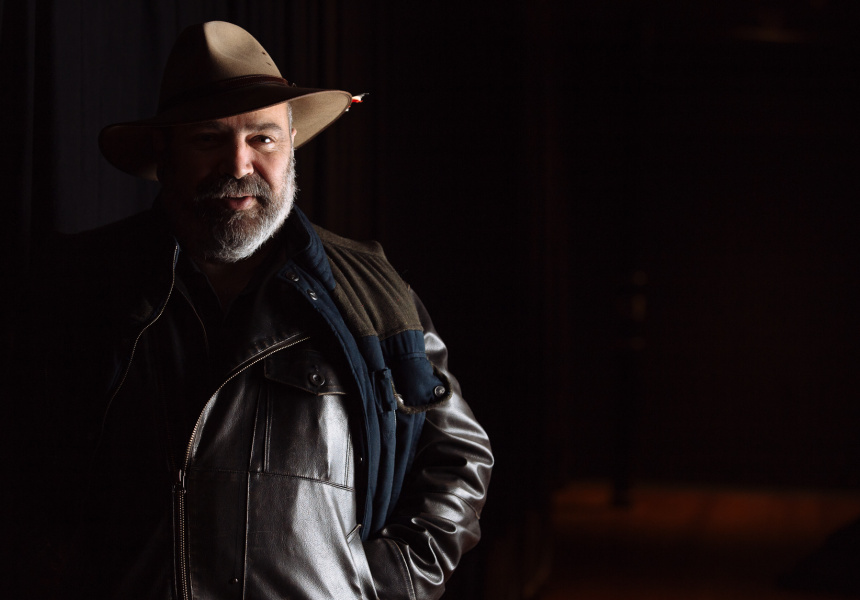 Richard Frankland and Wayne Blair are competing for the title of Busiest Man in the Arts. Blair, fresh from the international breakthrough of The Sapphires, has been filming its follow-up in Bulgaria. Frankland, meanwhile, is writing a book on cultural foundations, laying down tracks for a new album, working with Rolf de Heer on an upcoming feature film – oh, and to put him a nose ahead, he’s completing his Ph.D.

Nevertheless, the two old friends found time to meet here in Melbourne, producing Walking into the Bigness at Malthouse Theatre. The play is based on Frankland’s formative years as an abattoir worker, soldier and fisherman, then an Aboriginal activist and ultimately, writer, filmmaker and musician. Performed by Tammy Anderson, Paul Ashcroft, Luisa Hastings Edge and Rarriwuy Hick, Frankland himself accompanies the play with his own compositions on acoustic guitar. Needless to say, it’s personal. “We wanted to honour parts of the life I’ve been fortunate enough to live,” he explains. “So there’s stuff like working in the abattoirs where my first job was cutting off lamb’s dicks when I was about 13. And, later on, when I left home the next year, and came back from my granddad’s funeral, working on the wool bales where my brother had worked.”

The piece is, in a sense, a sequel to Frankland’s 2003 Belvior production, Conversations with the Dead. Chronicling Frankland’s experiences as a field officer for the Royal Commission into Aboriginal Deaths in Custody, the play was another collaboration with Blair – though in that case, Blair was the play’s star. For Blair, it was important to delve beyond Frankland’s public persona. “I know there’s so much more to his life than those stories,” he says. “I find that more poignant to who the man is, or who the woman is. At the end of the day, who the person is. The politics and the joy and the little inside stories – shit that could make a good film, you know?”

An urge to unpick the politics of Frankland’s youth was another impetus for the pair. “My age group, is, I guess I call it: the tail end of that generation,” says Frankland. “Being a Koori kid, jumping over that cultural abyss at that age was pretty difficult, so there are snapshots of those moments, some of it comedic and some of it sad.”

Walking into Bigness employs an unusual storytelling method, weaving Frankland’s own music through the play. “It’s not a musical, it’s a narrative with music,” explains Blair. “I’ve known Richard’s music for a while, and I’d be somewhere in the world – or somewhere in Australia, or you know, be out on the desert road somewhere – and Walk into my Memories would come on, and I’d just be like, ‘I’m back home’.”

The pair began developing Walking into the Bigness slowly, as friends, at Frankland’s home in south-west Victoria. “It’s very raw, a very raw story when we started working on it,” he says. “A lot of it was Wayne interviewing me in my lounge room, just having yarns. Whether we were out split-ting wood or driving up the bush, or me showing him places, and then all of a sudden it grew.”

That natural connection between the two was part of the project’s appeal for Blair. “When I go down to Portland and stay at Richard’s place, you’re just connected and it’s just very easy and it reminds you of home, just gentle connections that make you who you are,” he says.

Over the course of their friendship and their professional collaboration, their conversation often turned to the place of Indigenous stories in Australian culture. “Our relationship became a brother-hood and we swapped around lots of ideas and they weren’t ideas necessarily about projects, they were about where Aboriginal storytellers fit in and how and why and what’s our obligation?” says Frankland.

While both men are clear about the slow pace of change in accepting Indigenous artists into the artistic mainstream, they have both seen, at least, some positive development in recent years. “What’s happened is the door, the access point to that industry, is open again,” says Frankland. “Now it’s still hard for us to be employed as directors or writers as opposed to black directors and black writers, but what’s happening is the third wave that’s come along is doing that. And slowly but surely the door is opening wider.”

Walking into Bigness opens on Friday August 1 and runs until August 23 at The Malthouse Theatre. For bookings visit malthousetheatre.com.au.