Alpha60 on Accelerating Through 2020 and into MFW

Like the year itself, this year’s Melbourne Fashion Week (MFW) is different from ever before. In partnership with MFW, we speak to Melbourne label Alpha60 about their thoughts on the event, what they're looking forward to seeing, and their hopes for the fashion year ahead. 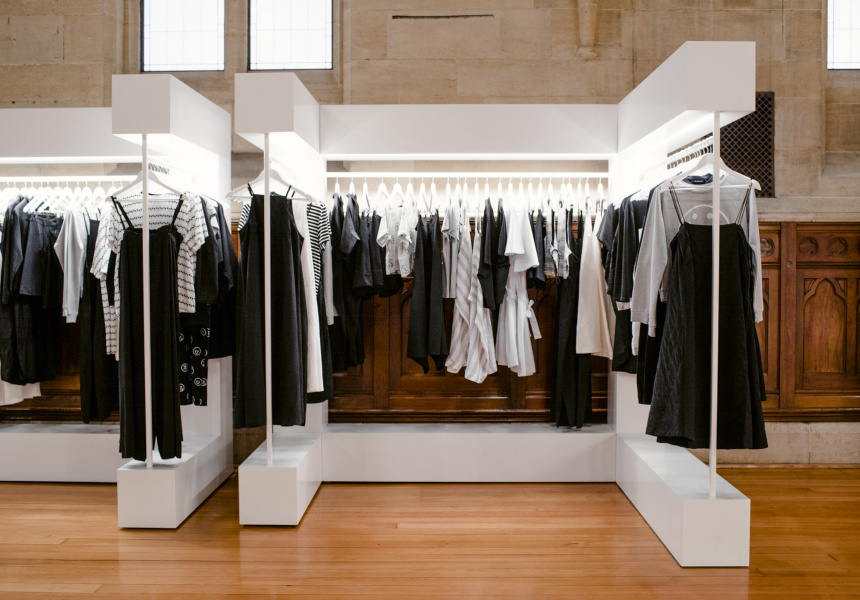 Siblings Alex and Georgie Cleary haven’t had the difficult year you might imagine of a small, local fashion business in the midst of a pandemic. If anything, they’ve found their cult fashion label, Alpha60, has been able to face the challenges head on.

“Obviously it’s been interesting,” says Alex. “But what we found most interesting was the things we had progressing just seemed to accelerate.”

Georgie agrees. “Certain things we would have got to eventually, like really focusing on digital, kind of got sped up,” she says. “We’re a nimble little business that was lucky to be able to adjust quickly and get through.”

It turns out that, during a time when fast fashion was shuttered, and international deliveries were delayed, being a small, local fashion business was an advantage. Particularly when support for local businesses turned into a country-wide movement on social media.

“It’s such an almost overwhelmingly positive response,” says Alex. “Just how positive and parochial people are for Melbourne supporting Melbourne. In the last week or so out of the lockdown, people have come out firing.”

So what a perfect time for MFW to announce their re-imagined program of events – just as the city emerges from lockdown and notches up almost two weeks of zero case days. If the theme of the year has been “support local” then MFW couldn’t have timed it better.

“The timing for Melbourne Fashion Week is great,” says Georgie. “It’s kind of like all rules can be broken right now. There’s sort of the traditional structure of what fashion week was – these structures around it have all been broken. It’s an exciting time to do something different and be part of a movement. It’s a time that we think will be really hard to ever recreate again. It’s the first time after such a big, chaotic year where things are feeling really creative.”

Alpha60 are planning to underline the rule-breaking theme at this year’s event, saying the mostly-digital format is the perfect opportunity to say something new and exciting about their label.

“We really like the idea [of a mostly-digital MFW],” says Alex, “even the change from a traditional runway format. It suits us in the way you can present more than just the clothes on models. You’ve got a lot more room to package it with music, and a more visual and emotive aesthetic.”

Georgie agrees. “It opens up a new way of storytelling and finding new ways to engage with your customer. You have a new level of connection. You’re only bounded by your imagination.”

She points to how global fashion weeks’ embraced fashion films this year. “You can do a film from your iPhone or you can do a big production, and everything in between,” she says. “I think it’s a bit of an equal playground for brands around the world – and that’s bringing up a lot of creativity. It’s really exciting to be a part of, because we won’t have the same moment in time again.”

Aside from the label’s own digital show at this year’s MFWF, we asked Alpha60 for five things they’re looking forward to.

Jonnine Standish x Shauna Toohey
Their must-see is the chat between Melbourne musician and art director, Jonnine Standish, and co-founder of cult Melbourne label, PAM, Shauna Toohey. Together they’ll look into the future of seasonless collections, fashion events, and the industry itself: “[Tune in to] The Creative X Creative series of talks. Interesting and candid insights into the industry.”

MFWF Digital Shows
When it comes to socially-distanced shows, the Alpha60 duo couldn’t pick and choose: “All the digital shows. Can’t wait to see all the shows here and the creativity.” Alpha60 is one of 24 digital shows featuring the likes of Maticevski, Scanlan Theodore, Arnsdorf, Elliatt, J’Aton, Viktoria and Woods, Ngali and PAM, in addition to a student designer and EveryHuman inclusive fashion show.

Urban blooms
This year, florists are taking over the city during MFW, with a series of large-scale installations. Check out the trail from the Arts Centre to the North Melbourne Post Office, Lygon Street and Hosier Lane: “Flowers, yes please. A fun activity to stroll the city and looks at blooms.”

Meyers Place Runway
Alpha60’s sole in-person choice is a key – if very limited capacity – event at MFW this year: the Meyers Place Runway, featuring Articles of Clothing, FME Apparel, Hew, Jude, North, Rains, Reborn by Homie, Remuse, SZN and Vow Studio. “This show looks amazing. Being back in the city and watching a show - exciting.” For those who missed out on tickets or dining packages at Meyers Place restaurants, the runway will be available online afterwards.

This article is produced by Broadsheet in partnership with MFW.