An All-Female, All-Star Band Is Set to Take Over Hamer Hall

A unique group of female musicians – and some very special guests – will take centre stage. In partnership with Arts Centre Melbourne, we talk to the driving force behind the performance. 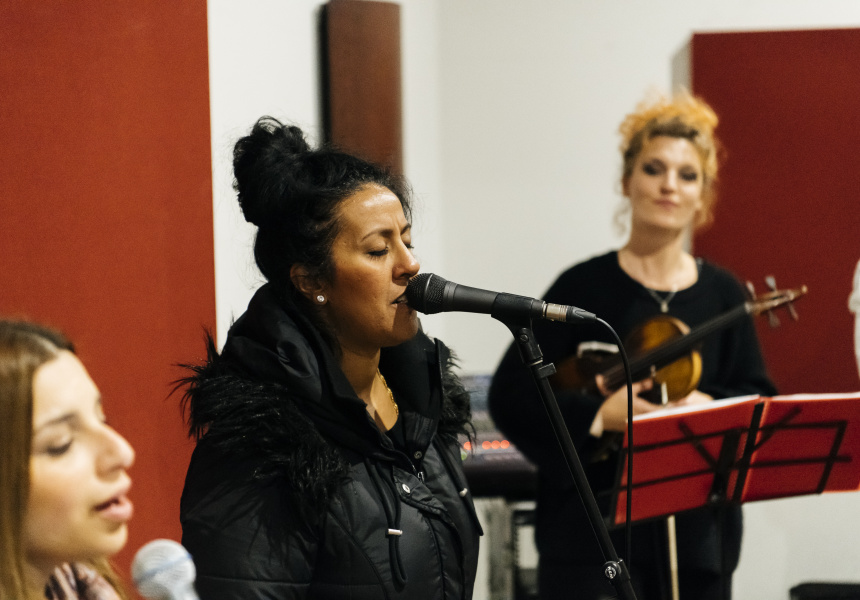 Melbourne violinist, singer and musical director Xani Kolac kept noticing something. She was being invited to take part in gigs celebrating female songwriters, only to find the backing bands were often men.

“It was exciting to be involved, but I thought it would’ve been great if the shows included more women,” says Kolac. “Women are often behind the scenes as instrumentalists in a lot of bands, but that wasn’t being reflected.”

These talented women hidden in the music industry have been on Kolac’s radar for some time. “People weren’t creating all-male backing bands deliberately, they were just booking their mates,” she says. “But there are plenty of female and gender-non-conforming instrumentalists in Melbourne, so it shouldn’t be unusual. They might want to get non-male musicians involved but simply not know how. So I thought, ‘Wouldn’t it be great if someone came up with an all-female ensemble and used it to showcase the power of women in music?’”

Then she approached a producer she knew, who responded by booking Hamer Hall at Arts Centre Melbourne for the group’s 2017 debut. “I said I wasn’t ready,” says Kolac. “But we did it and it was a massive career highlight. We received a standing ovation at the end. Some people were in tears; others came up and told us it was really fun and entertaining. There was a lot of onstage banter.”

The show was such a success that a second has been booked at the venue next month. Called Stand By Your Woman, the special performance on September 16 will feature a slew of guests, both new and established, alongside the SPIRE ensemble.

“We worked with Kate Ceberano last year, but all the other artists are new for 2018,” says Kolac. “Each artist will perform two songs each; maybe one of their own, maybe a cover version of a song that inspires them. There will also be a number of instrumental features, and a song I’ve written especially for the show that all the artists will sing together.”

“It has been so empowering and exciting to collaborate with lots of women,” says Kolac. “Since that first gig a lot of instrumentalists in the band have gotten gigs with the vocalists they performed with. There are some really great women behind the scenes in the music industry, we just need to shine a light on them.”

Stand By Your Woman is on September 16, 2018 at Hamer Hall, Arts Centre Melbourne. Book tickets.