Australia is about to become home to the most complete – and best preserved – Triceratops skeleton in the world. In partnership with Museums Victoria, palaeontologist Dr Erich Fitzgerald unpacks the process of acquiring the impressive one-tonne fossil and guessing at its colour patterns and cause of death. 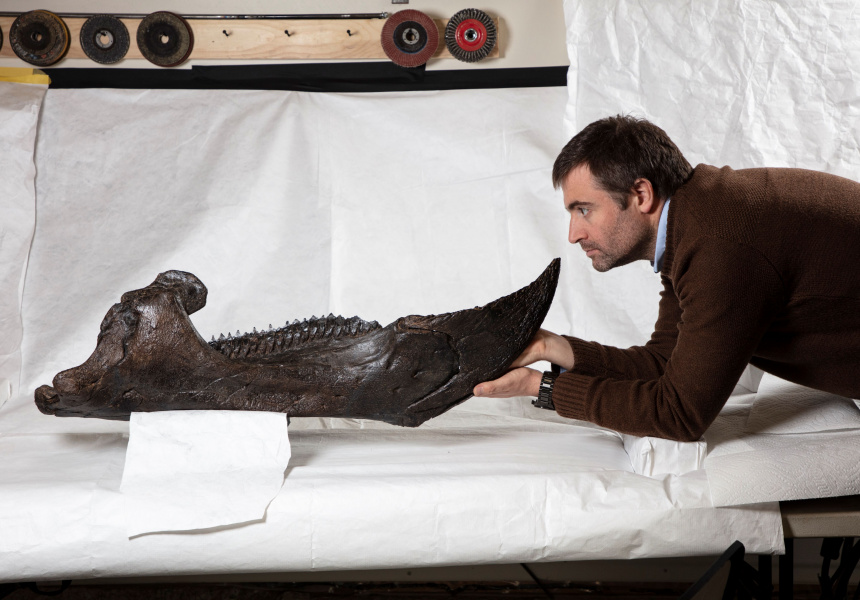 If you’ve ever seen a dinosaur skeleton on display in Australia – no matter how impressive – it was most likely a replica cast from the original fossils. But when Melbourne Museum displays its newly acquired adult Triceratops later this year, it will be the real deal.

“That’s the point of difference: it is the real fossil,” says Dr Erich Fitzgerald, Senior Curator of Vertebrate Palaeontology at Museums Victoria. “In terms of authentic fossil skeletons of large dinosaurs, there are vanishingly few. And the Triceratops will by far be the most complete fossil dinosaur on display in our region, including New Zealand and Southeast Asia.”

In fact, with 87 per cent of the bones accounted for, this is the most complete and – best preserved – Triceratops skeleton anywhere in the world. Most Triceratops in museums today consist of the skull and not much more. That’s because the sheer size and mass of the skull means it’s more likely to stay in place while the dinosaur’s tissue rots away and smaller bones scatter.

With its namesake trio of horns and a frill approaching 150 centimetres wide, the head of the museum’s Triceratops alone weighs about 260 kilograms – and that’s just the fossilised bone. It’s one of the most intact Triceratops skulls ever discovered. The full skeleton weighs in at more than one metric tonne, with the animal when alive exceeding the mass of a full-grown African elephant.

Slated to make its public debut toward the end of 2021, the Triceratops was discovered in south-eastern Montana, where it came to rest in or near a riverbed somewhere between 66 and 68 million years ago. It’s now on Vancouver Island on Canada’s west coast, awaiting passage to Melbourne. Fitzgerald got to inspect the acquisition first-hand there in late 2019, and marvelled over the find.

Though the fossil was unearthed on private property, which means the land owners can sell it on the open market, Museums Victoria still had to undertake more than a year of investigations into the legal provenance of the find.

It was worth it – not only to have the dinosaur on display, but to have it in the public museum collection, which ensures that all scientific study around it will be entered into the public record. “It allows for independently verifiable scientific research to be done on this fossil, [for it to be] published, and then vetted and tested for as long as civilisation lasts,” Fitzgerald says. “That source material can be returned to by scientists again and again.”

The Triceratops is missing only a small portion of bones around its tail vertebrae, and hands and feet, and is most likely an adult; at the youngest a late-teenager. As for how it died, there are no suspicious scratch or puncture marks in the bones, despite Triceratops co-existing with T. rex in this dinosaur’s time. Its burial must have been relatively quick, since there wasn’t time for scavengers to get to it and carry the bones away. “I think we have to treat it as an open question at the moment,” says Fitzgerald on the cause of death.

As for what the living dinosaur might have looked like, scientists can infer a fair bit from the bones of similar relatives. And they know from impressions in the fossils that Triceratops had hexagonal scales. The preserved skeleton of a relative found in China has also given them hints about its colour pattern.

“Herbivores related to Triceratops … had a colour pattern that afforded them some camouflage when they lived in forests,” Fitzgerald says. “Whatever the exact colour combination might have been, quite likely camouflage was playing a role.”

For Fitzgerald, who spent a few formative years working at the world-famous Smithsonian National Museum of Natural History in Washington DC, the chance for Australians to see an actual skeleton rather than a replica – and a very nearly complete one at that – is definitely a dream come true. “For me it’s a lifelong passion, and not just a job,” he says. “Now we can inspire future generations and show them something truly world-class.”