Heart-warming new film Ladies in Black – 25 years in the making – was shot in his hometown. 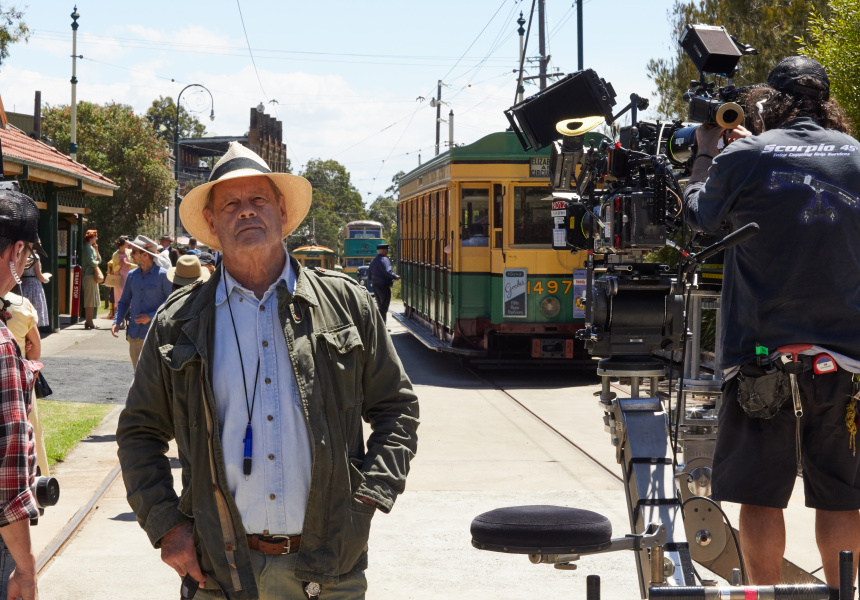 If Australian filmmaker Bruce Beresford tells you he has an idea for a film you should listen, because chances are he’s onto a good thing. Time and again he’s proven his detractors wrong. His 1989 film Driving Miss Daisy, for example, took years to make because funding bodies refused to back it.

“[Producer] Richard Zanuck and I went to all the major studios and nobody wanted it. They kept saying, ‘It’s an old Jewish lady and an old black man talking in the kitchen, who’s going to watch that?’ And I said, ‘Nobody’. And they said, ‘That’s right, nobody and we’re not going to finance it’,” Beresford tells Broadsheet.

Eventually an independent Canadian producer came on board and the gem of a film, starring Jessica Tandy and then-newcomer Morgan Freeman, went on to win four Academy Awards, including Best Picture, while Beresford earned a BAFTA nomination for Best Director.

It was a similar story with his latest release, Ladies in Black, a film adaptation of Australian Madeleine St John’s book The Women in Black, which Beresford optioned in 1994 but took 25 years to come to fruition (St John was Beresford’s friend from their student days at university).

“I thought it would be fairly easy to set up because everybody would respond to the book the way I did: that it was very funny, had good characters and an interesting theme. But generally people didn’t react like that; it took quite a long time. It was only really when [producers] Sue Milliken and Allanah Zitserman said to me, ‘It is a fabulous script and it is a terrific book and we can set it up’. Suddenly people who were telling me for years it was boring invested in it,” he says, laughing.

The result is an engaging film full of heart, enchanting characters, humour and a compelling story that has an admittedly unusual storyline. It follows a group of women working in a big Sydney department store in the late 1950s, a time when the impact of European migration and the rise of women’s liberation was set to change Australia forever.

Ladies in Black stars British Mad Men actress Julia Ormond and Australian stars Susie Porter, Noni Hazlehurst, Rachael Taylor (Jessica Jones) and Shane Jacobson, and relative newcomer Spiderman: Homecoming actress Angourie Rice, who was just 16 when the film was made. Rice is Lisa, the fresh-faced young school leaver who takes a summer job at Goode’s (David Jones by another name) while she tries to convince her father (Jacobson) to endorse her university application.

In the years after Beresford optioned the film rights, the book was adapted as a stage musical by Tim Finn (of Crowded House fame) and directed by Simon Phillips that went on to tour nationally to great acclaim.

All the while Beresford – the director of more than 30 films including Breaker Morant, Mao’s Last Dancer and Paradise Road – kept plugging away with Milliken at draft scripts until finally Zitserman convinced Sony to come on board.

Beresford never wavered in his belief the book would make a great film, with its universal and sadly still relevant themes canvassing intolerance to immigrants and refugees – blatant racism, if you will – and the fight for sexual equality, not to mention its great, relatable characters.

“The book had very funny dialogue that wasn’t trying to be funny, it was just observant and witty,” he says. “And thematically I liked the idea of the Australians being introduced to and coping poorly with these people who came from Europe where English wasn’t their first language. Where I grew up in Toongabbie then Wentworthville [in Sydney’s western suburbs] it was like that; we were suddenly surrounded by migrants who came in and I remember a lot of hostility from locals, which always seemed to me to be very irrational. I liked the way Madeleine handled it in the book, which was basically to say these are all decent people, they just don’t speak English.”

Once the film was green lit it was a relatively quick process: the $11 million feature was shot in just 32 days in locations including beloved children’s author/illustrator May Gibbs’s Neutral Bay home; tram scenes were shot at the Sydney Tramway Museum in Lidcombe; and the biggest coup – securing Sydney’s flagship David Jones store, its unrenovated seventh floor served as the ground floor of Goode’s.

“They had never touched it and it was empty so we had to put everything in – the counters, lights, and we used it as the store’s ground floor so the art director had to build a street,” Beresford exclaims. “We needed three days but they said, ‘One day is all you’re getting’. And it’s through the whole movie, you look at it and think, ‘How did we do all that in one day?’”

Ladies in Black opens nationally on September 20. Watch the trailer.