Ahead of her event this weekend in Bendigo, we speak to the acclaimed writer about growing up in, and writing about, Melbourne. 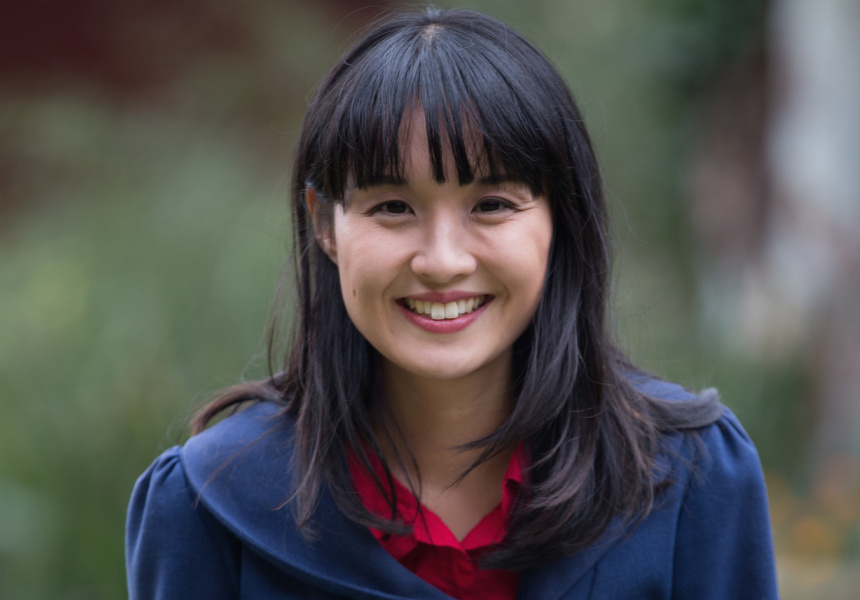 Alice Pung, an author, a lawyer and guest at this weekend’s Bendigo Writers Festival, is in a unique position to write a novel about inequality in Australia. And she has done so, with her bitingly funny new book, Laurinda. Scooping her three-month-old baby onto her hip and doing laps of the dining room at Melbourne University’s Janet Clarke Hall, where she is Writer in Residence, Pung talks with quiet passion about her work.

“I’d written a lot about being an Asian Australian, and this time I wanted to write about class and the disparity between classes, and what that does to a young person,” she says.

The book centres around Laurinda, a fictional inner-Melbourne private girls’ school that, despite the rose gardens and gleaming facilities, has something rotten at its core. Racism is ever-present, and girls and teachers who don’t possess the school’s more valued qualities, (which seem to involve being white, rich and attractive) are mostly ostracised or ignored. “No school has ever been so horrible that I have based a whole culture on it,” she continues, laughing. “But I have been a speaker at many schools, and there are some where you do feel the vibe to succeed.”

“I’m sure you’ve heard of schools like that, where they say they are building ‘future leaders’,” Pung says. Laurinda prioritises leadership at all cost, and is loosely based around her own high-school experiences. Like her protagonist, scholarship girl Lucy, Pung is the daughter of hardworking migrants, raised in a socially disadvantaged suburb (she was born a month after her parents fled from Pol Pot’s Khmer Rouge regime). The authenticity of the family story shines through in the novel, which is filled with humour and insight.

“The first school I went to was Footscray Girls’ Secondary. And that was a school where the teachers tried really hard. You had some of the toughest and most excellent teachers there. But most of the students were migrants and refugees, and a lot had only come out of a three-month English course and were from places like Bosnia and Vietnam. It was a really interesting place.”

Then she went to a Catholic girls’ school, a selective state school and a private girls’ school. “In each I could see how the disparities in class played out. There’s this idea that everyone has equality of education, but in reality, I don’t think that’s the case. When you change schools, sometimes you have to change your identity. Some schools don’t accept you if you are a bit ethnic,” she says.

At Laurinda, Lucy is courted by the Cabinet, a group of girls from a world of privilege, whose standing at the school is amplified because their mothers are generous alumni benefactors. The Cabinet treats Lucy like a high-profile charity case, using her to increase their power and influence at the school.

How did she get into the skin of the mean girls? “Some of them weren’t fiction,” she says candidly. There’s a scene in the book where Lucy is invited to a girl’s home to teach some school mothers how to make rice paper rolls. “I did that. The people were so well-intentioned,” she trails off. “But something about it was not genuine.”

Going to so many different schools was difficult, but it gave Pung a different perspective on Australian life than if she’d attended just one. “It made me comfortable with being an outsider looking in. I wasn’t an insider, and it was okay.” It’s a theme with broad resonance, and one she is keen to expand on this weekend at her Bendigo event.

Alice Pung is appearing at Culture, Class and Conflict at 2.30pm this Saturday.

Tickets for the event are available at the Bendigo Writers Festival site.