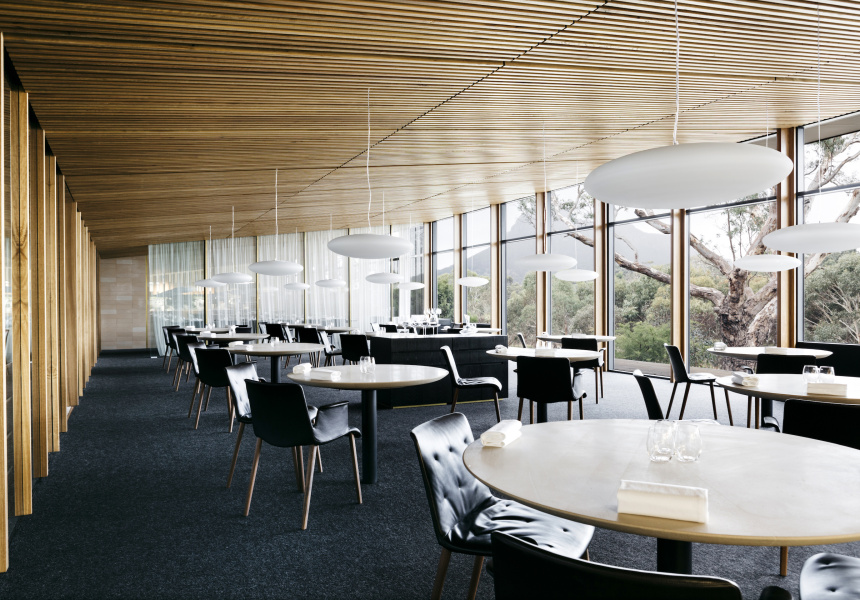 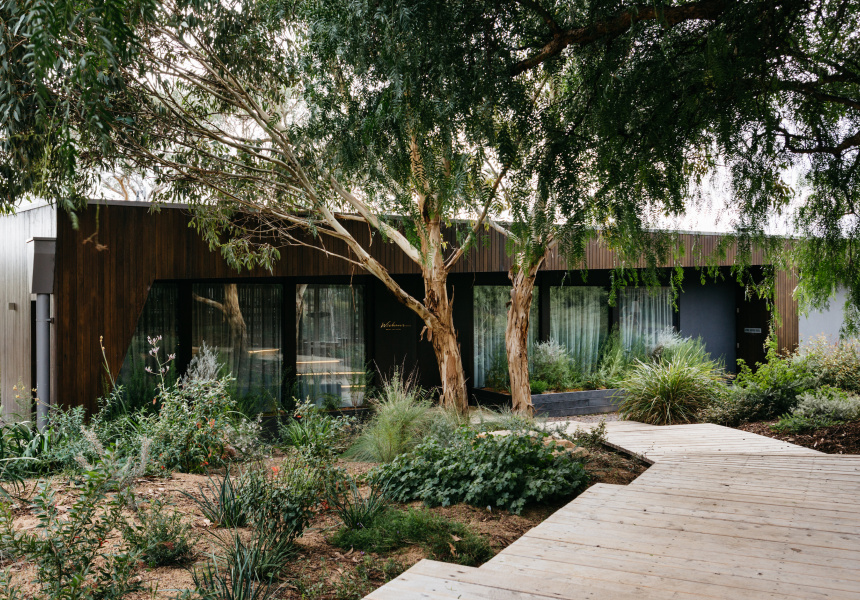 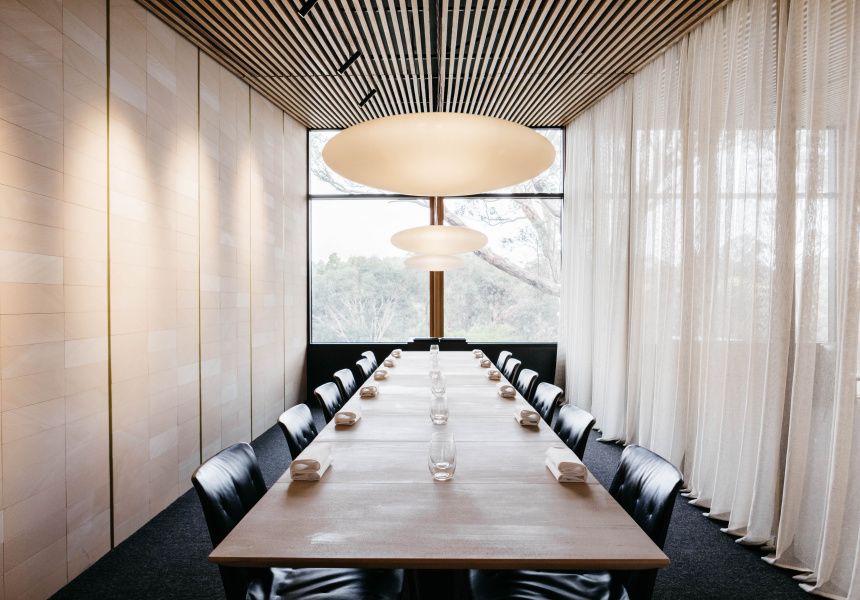 Three-or-so hours’ drive from Melbourne, shortly after the freeway hands over to dirt roads and farmland, the mint green facade of the Royal Mail Hotel is a welcome sign. The hotel has a casual diner, Parker Street Project, and on-site accommodation, but fine diner Wickens is what makes this a culinary destination.

The Royal Mail Dining Room became Wickens at the Royal Mail in late 2017, named after executive chef Robin Wickens (formerly Fitzroy’s Interlude, and Wickens Delicatessen & Provedore in Apollo Bay). To get to the restaurant, take a boardwalk through native bush scrub to a dramatic charcoal cube, designed by Melbourne-based Byrne Architects. The bold structure is like nothing else in the area, and immediately sets the scene for a remarkable dining experience.

Inside, a sheer glass wall provides unobstructed views of Mt Sturgeon, Mt Abrupt, and a swathe of ancient red gum trees, and beyond more floor-to-ceiling glass is the open kitchen, where Wickens and his team make intricate dishes that champion the Grampians and surrounds.

Any produce not grown on-site, such as seafood, is from the Grampians region. Every morning the chefs head out to select ingredients and find inspiration for the day’s menu from more than 1.2 hectares of kitchen gardens, stone fruit and citrus orchards and olive groves. Herds of beef and lamb are reared on 25,000 hectares of farmland, with the kitchen team involved in all stages of production.

Back in the dining room, choose from five or eight courses that make the most of those abundant gardens. A chilled purple-potato soup is rich, smoky and peppered with garlicy chives; blood pudding comes topped with fromage de tete (pork terrine) and pork crackling, lifted by a bitter, dark green lovage emulsion; wood-charred flathead sits alongside fresh peas and shaved kohlrabi; and a playful dessert of green tomato and gingerbread is presented as a dumpling, sweet woodruff lending a herbaceous note.

There is a lot of choice for matched wines; a list of more than 2000 bottles is expertly navigated by sommelier Matthew Lance. The “Cellar” pairing draws on a range of local and international drops from the Royal Mail’s 28,000-strong collection, collated over 20 years. Or, dedicate yourself to Australian or French matches (the Royal Mail has the largest privately owned collection of bordeaux and burgundy in the Southern Hemisphere).

Chef Wickens is heavily involved in all aspects of the diner, from staff uniforms and crockery, to the design of the pared-back dining room, which is almost completely unhindered by furniture aside from the requisite chairs and tables.

They’re made from sandstone quarried in Dunkeld and handcrafted by local stonemasons, and are bolted to the ground, meaning the feeling of privacy and sense of space cannot be interrupted by future efforts to squeeze a few more covers in. Local hardwoods and sheep leather make repeat appearances in the room, too, all under the gentle glow of hand-blown glass pendant lights.

A Look Inside: Follow the Scent of Woodfire To Find Mr Miyagi in the Big Smoke – Here for a Good Time, Not a Long Time