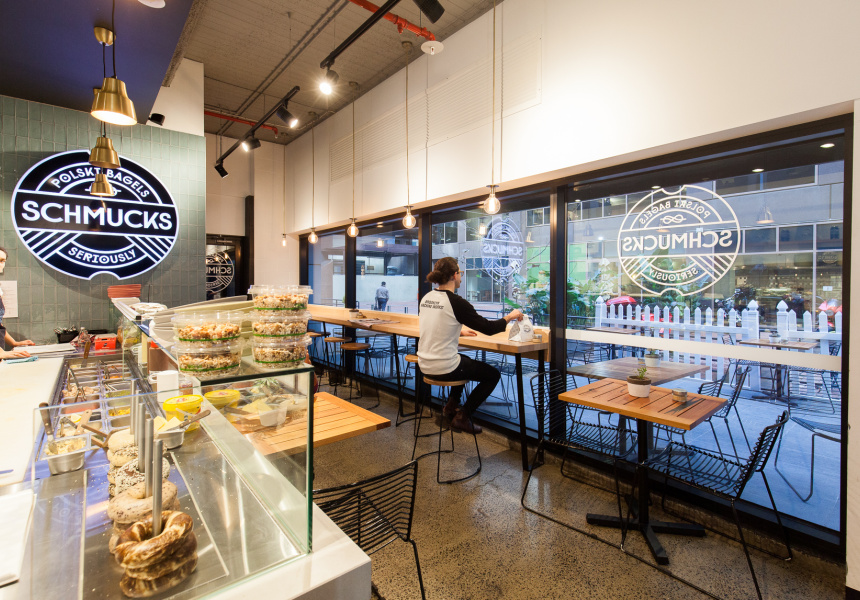 Some people pay homage to their grandparents by giving their kids a middle name. Jeremy Marmur opened a bagel shop instead, with help from hospitality trio Ben Avramides, Tommy McIntosh and chef Simon Winfield, the people behind catering group Tommy Collins and since-sold cafes Hawk & Hunter, The Little Ox and Little Collins.

The name Schmucks (Yiddish for “fool”) is in memory of Marmur’s grandfather. Despite surviving the Holocaust, he always saw the humour in life. He also loved bagels – Marmur has many fond memories of them sharing the chewy rings together.

Prior to opening Schmucks at the tail end of 2015, Marmur travelled to New York to find out what makes a great bagel. One of the most important things he learnt is the method of steaming bagels rather than boiling them. It makes for a lighter texture but maintains the flavour.

But while Schmucks’ seeded grain, dark rye and sesame bagels may lean traditional, the fillings sure don’t. Take the Hippie Slicker – a seedy bagel with grilled cauliflower, hummus and lemon-dressed watercress. For the meat eaters, there’s the Schmoozer with hickory-smoked beef brisket, chimichurri and iceberg lettuce. There’s even a bagel with swirls of Vegemite baked inside it.

If you’re starting early, grab an Allpress coffee with your breakfast bagel to go.