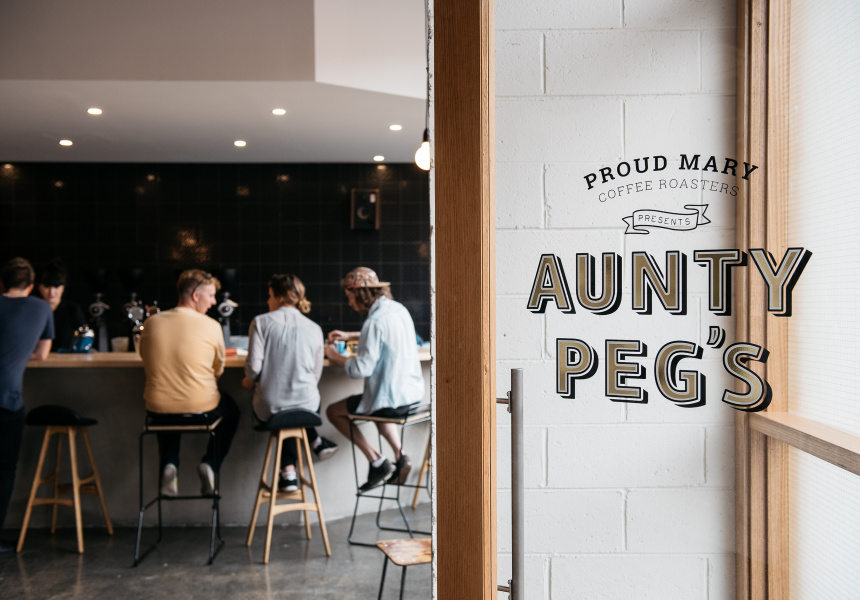 At the front there's a wall of shelving loaded with coffee paraphernalia, including V60, Clever Dripper, AeroPress and French press devices. Over at a dedicated bench, you can use Proud Mary’s coffee to try each system before you buy.

If you want to really be impressed, there's an imposing cement bar equipped with three beer taps, which pour a frothy, ale-like brew made by steeping ultra-premium Geisha beans in cold water at a brewery in Geelong, then putting it into kegs. Like any cold brew, it’s a subtler take on coffee, with low acidity and bitterness.

Alongside that are three single-grip espresso handles, removed from a Synesso machine and built into the benchtop, as though they were also beer taps. It’s a novel experience to sit at the bar watching your espresso extract, munching a sweet treat and listening to the steady thrum of Proud Mary’s three roasting machines, visible in the connecting warehouse. Just don’t expect a latte; Aunty Peg’s only serves black coffee, to better highlight the product.

Drop by 10.30am on Saturdays for a free cupping (tasting) session.