The Viral Kangaroo Punch is Now a Melbourne Mural

34 million YouTube views later, someone had to do it. 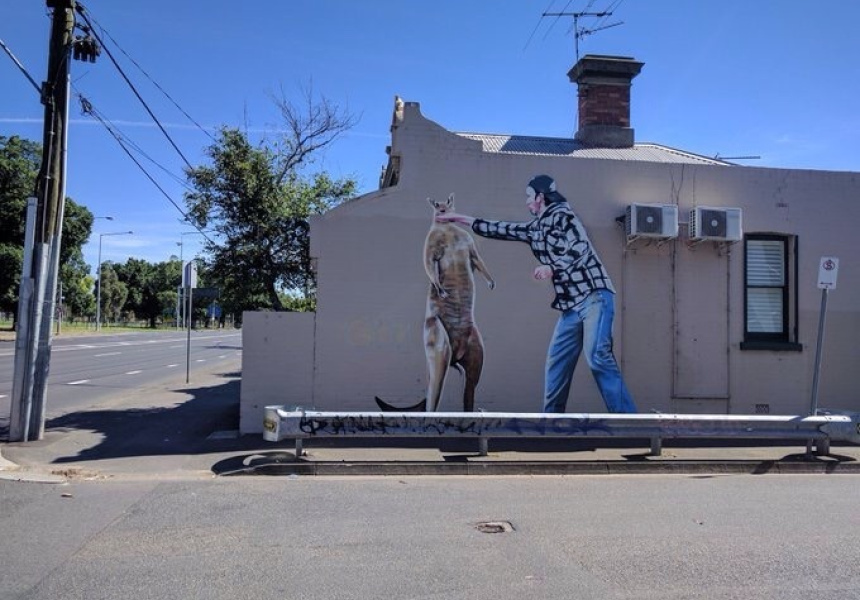 Earlier this month, a video of a NSW zookeeper punching a kangaroo to save his beloved dog went viral. The clip has amassed more than 34 million views on YouTube.

Now a Melbourne street artist has immortalised the moment when Greig Tonkins (who in this tribute looks a lot like Luke from Gilmore Girls) hit a roo, in a mural on Punt Road near Kelso Street in Richmond.

The graffiti appears to be the work of street artist Lush Sux, who posted this photo of the mural on his Instagram account one day ago. Broadsheet reached out to Lush Sux for comment but did not hear back in time for publication.

Lush Sux is responsible for a bunch of pop-culture graffiti tributes around Melbourne, including several he created during the US presidential election. Donald Trump and Hillary Clinton kissing; a topless Melania Trump; Trump vomiting a rainbow; Trump wearing a floral wreath on his head – they’re all the artist’s work.

He has also devoted walls to Pauline Hanson in a burka; the Kanye West film clip where he’s naked in bed with Kim Kardashian and Taylor Swift; and Jerry Seinfeld smoking a cigar. Yesterday the artist posted a photo of what appears to be a new work, this one featuring Vladimir Putin in a pair of sunglasses with “Hackerman” emblazoned below his face.

Lush Sux’s work will actually be on show in Melbourne until December 14 as part of a pop-up exhibition by Micky’s Art. The show, however, can only be accessed via request by emailing info@mickysart.com.