Multiple Climate Protests Are Happening in the City Throughout the Day

Major tram routes in the CBD will be closed for four hours as climate change protestors march through the city and stage a sit-down in front of Parliament House. 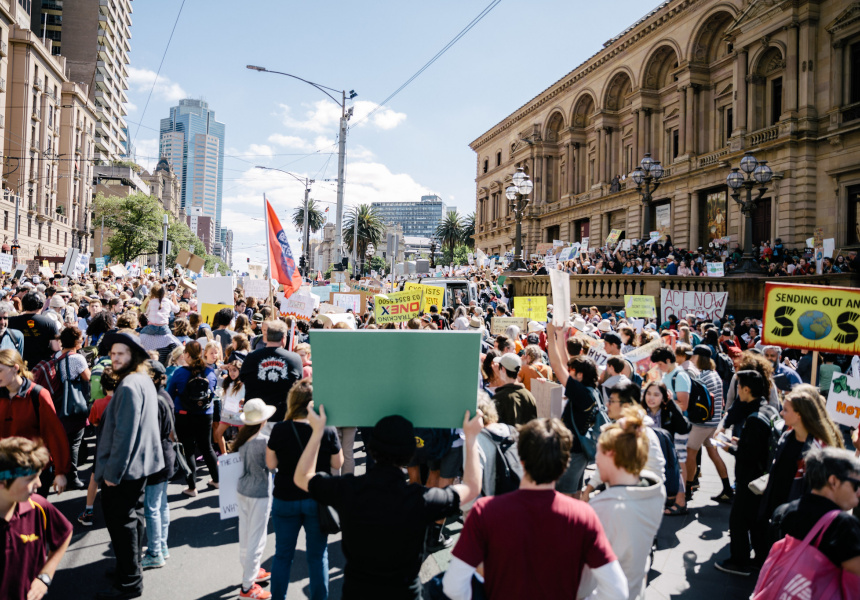 Multiple climate activist groups are holding protests in the CBD today, in response to climate inaction in the face of unprecedented bushfires across Australia.

Disruptions are expected to affect most tram lines in the city, particularly those running along Swanston Street, Bourke Street and Spring Street from 12pm to 4pm this afternoon.

At noon, activist group Uni Students for Climate Justice will lead a march from the State Library of Victoria, heading south along Swanston Street to Collins, where they’ll stop outside BHP headquarters. From there, they’ll march north along Russell Street to GHD’s Lonsdale Street office, before heading east to Origin Energy on Exhibition Street. The march will end outside Parliament House on Spring Street.

At 2.30pm there will be a sit-down in front of Parliament in solidarity with those affected by bushfires, including Traditional Owners of the land, in the latest round of the national School Strike 4 Climate actions. Protestors will sit on the steps until 4pm demanding action on climate change, and increased support for Indigenous land management practices and the Rural Fire Service in particular, while also raising funds for the Red Cross’s Bushfire Appeal. The Herald Sun reports that around 2000 people are expected to join the sit-down.

Extinction Rebellion will hold another protest in Batman Park on Spencer Street after the sit-down.

Yarra Trams recommends taking City Loop trains while travelling within the city during this period.