Melbourne Skyfarm will have a sustainable cafe, an education centre and playground, and river views. 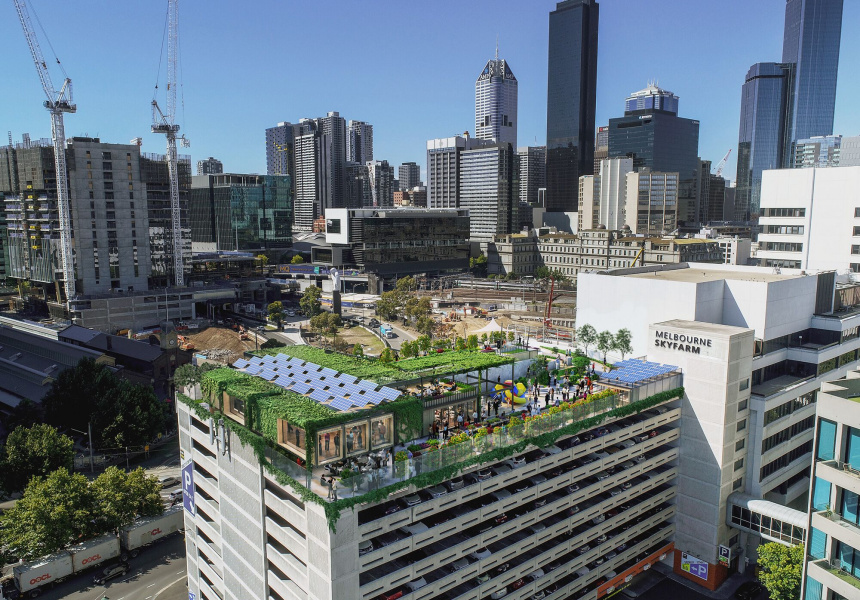 Seafarers Melbourne is a massive new development on the Yarra River’s industrial north bank that (once complete) will feature public parks, residential properties and an eco hotel. And now that list also includes Melbourne Skyfarm – a 2000-square-metre urban rooftop farm.

Brendan Condon, Melbourne Skyfarm’s co-director, wants to bring nature into the thick of the concrete jungle when it opens in 2020.

Condon says the space was too good to pass up. He sees it as an “opportunity to have a blank slate and create a beautiful space for nature and people together, right in the heart of the city”. He also has sustainability-focused business The Sustainable Landscape Company, which has planted more than 35 million indigenous plants in Victorian landscape projects since 1998.

The rooftop site, across from the Melbourne Convention and Exhibition Centre, will be home to a full working farm, an orchard, beehives, an education centre, a playground and a sustainable cafe. Produce from the farm will be split between the cafe – which will also be zero-waste and plastic-free – and food charities such as OzHarvest and Second Bite.

"We're looking to show how any space – whether it's a rooftop or car park or backyard, any unutilised urban space – can become a thriving food-producing area if we use the right food-growing architecture," says Condon.

The Skyfarm team has drawn inspiration from the Brooklyn Grange, an urban rooftop farm in New York City. There are also rooftop farms in Paris and Singapore, and Condon sees Melbourne as a natural fit for projects like this one.

"Melbourne's a very progressive, forward-thinking and innovative city,” says Condon. “We know that Melbourne’s community and the city of Melbourne are very supportive of environmental and sustainably initiatives.”

The group’s test farm in Port Melbourne has already produced 300 kilograms of produce in the past six months from a site the size of two car spaces, and it’s estimated the final working farm will produce five tonnes of fresh food per year.