A cease and desist notice from Kanye West’s lawyers came as a shock to fan and business owner Mark Elkhouri, who noticed Ye had started following his Insta stories. Five days ago, when Mark Elkhouri checked his business’s Instagram, the College Dropout Burgers owner was pretty stoked to see megastar Kanye West had found his account and started watching his stories.

In a post, Elkhouri commented “What is happening here?? I must have ‘found God’, because @kanyewest has been deep in our stories. Over 10 story views now!!”

Sadly, the jubilation was short-lived. A letter from Kanye West’s lawyers followed, ordering Elkhouri to paint over a mural of the rapper at his burger shop in Melbourne’s north-east. The cease and desist order also demanded Elkhouri remove a crowned teddy bear logo – inspired by Kanye West’s debut album The College Dropout, released in 2004.

“In some ways I was disappointed," Elkhouri told Broadsheet. “But I support Kanye. The guy is my fucking hero. There’s no denying how important he is to society. So the real question is how do I take it? At the end of the day, I have to respect it.”

The cease and desist letter was a follow-up letter to one Elkhouri received in February 2021. It also demanded a change to some of the menu items which riffed off the rapper’s famed tracks, including a chicken burger called Gold Digger.

Elkhouri has chosen to keep the business name College Dropout Burgers, but he’s had to shift its focus to honour other celebs such as Brad Pitt, Prince and Mark Zuckerberg. Its chicken sandwich is named after director Quentin Tarantino. “Fuck oath, something tells me Quentin isn’t gunna come after you like some salty pricks out there,” commented Tommy Wallace on Instagram.

“I was hoping to settle it with his lawyers but it wasn’t to be,” said Elkhouri. “The name College Dropout will now become synonymous with other college dropouts. It might be a blessing in disguise. Not everyone is a Kanye West fan.”

“It was never about publicity," he adds. “The name isn’t just a reference to his first album, it’s about what we set out to accomplish. I wanted to change that narrative of Kanye West being seen as ‘crazy’ and I wanted people to revisit his music … I haven’t stopped playing Kanye West’s music here.”

For those who spotted the crown on College Dropout Burgers’ old logo, it was also an homage to artist Jean-Michel Basquiat. “Right now I want to bring light to who he was and him being a college dropout too,” said Elkhouri, a little heartbroken but still a passionate Ye fan.

This article was updated following an interview with Mark Elkhouri. 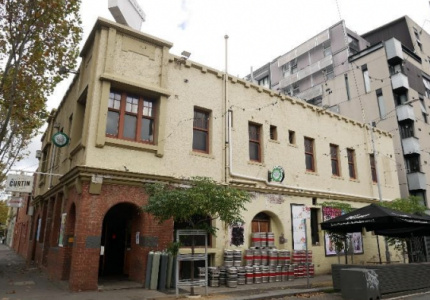