How Offal! A Grisly Spill Has Stopped Traffic in Melbourne

A gruesome meat spill has closed two exit lanes on the M80 with crews working to clear the “slippery, greasy mess” Photography: Courtesy of Department of Transport
1/2 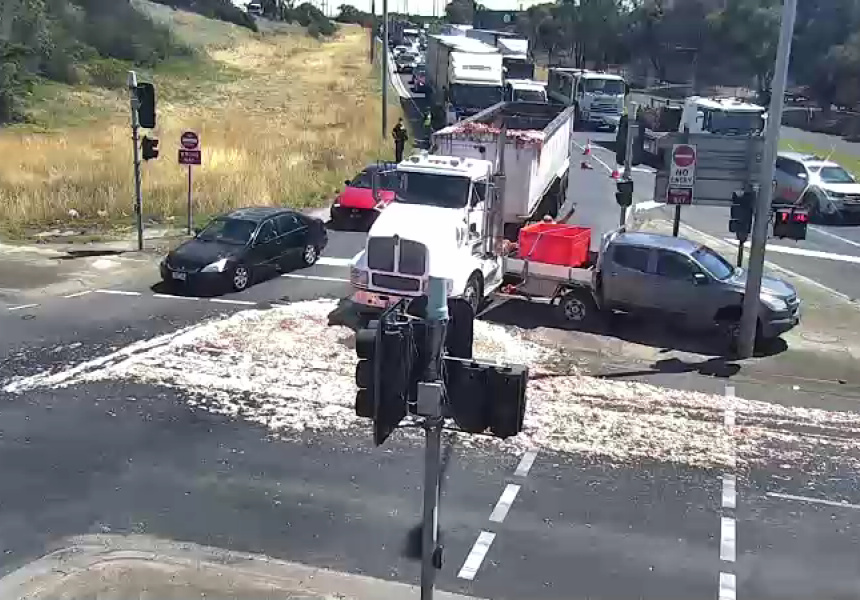 Photography: Courtesy of Department of Transport
1/2
by Doosie Morris
Share

Shortly after midday, a truck travelling east on the M80 came to bother, showering an exit ramp with entrails and forcing the closure of two lanes.

A spokesperson for the Victorian Department of Transport, Andrew Crook, told Broadsheet that for reasons unknown the truck braked suddenly causing the offal to “pass over the cabin in a meaty wave” before landing on the off-ramp.

Both left lanes at the eastbound Boundary Road exit are now closed and Vic Traffic has advised drivers they’ll need to turn left towards the Little Boundary Road roundabout to U-turn until crews have cleared it.

Crook says most eastbound lanes remain open and the scene should be cleaned relatively quickly, but suggests commuters avoid the area if possible or to expect short delays as the macabre mess is dealt with.

With temperatures in the mid-30s, the tripe will be ripe Crook says, adding there is an unusual precedent for entrail-related disasters on warmer days. “Whenever there’s an offal spill, it always seems to be warm – I wouldn’t want to be out there cleaning it up.”

A bobcat recently arrived on the scene to attend to the fast putrefying quagmire.